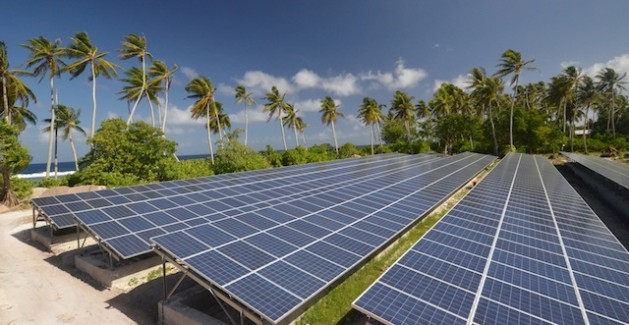 Caption: Solar energy installation on the atoll of Nukunonu in Tokelau. Credit: PowerSmart

BRISBANE, Oct 26 2012 (IPS) - Tokelau, a small Polynesian territory in the central Pacific, has surpassed the rest of the world in replacing fossil fuels and raised the benchmark of achievement on sustainable development.

Located north of Samoa, the three atolls, home to 1,411 people, will claim a world record when they switch to 150 percent renewable energy – sourced primarily from solar power – next week.

“Our commitment as global citizens is to make a positive contribution towards the mitigation of the impacts of climate change,” Jovilisi Suveinakama, general manager of the National Public Service of the Government of Tokelau, in Apia, Samoa, told IPS.

“We are proud of this achievement.  We congratulate and encourage other countries in the Pacific (to take) the same path.”

Atafu, Nukunonu and Fakaofo atolls, which are administered by New Zealand, are three to five metres above sea level and comprise a total land area of 12 square kilometres.

The territory’s energy requirements for electricity, domestic use and transportation have hitherto been met by imported fossil fuels, costing the tiny country roughly 819,500 dollars per year.

In 2004 the Government of Tokelau developed a national policy and strategy to increase energy efficiency and independence with a focus on the renewable sector.

This year the Tokelau Renewable Energy Project, funded by New Zealand Aid and comprising one of the world’s largest off-grid solar systems, came to fruition.

During the past three months 4,032 photovoltaic panels and 1,344 batteries have been installed on the three atolls.  The electricity generators will be powered by coconut bio-fuel produced on the islands.

In fact, the systems installed will be “capable of providing 150 percent of current electricity demand, allowing the Tokelauns to expand their electricity use without increasing diesel use.”

Suveinakama stated, “Savings from the purchase of fuel will be used to address our priorities in health and education and repay funds we have borrowed to implement this project.”

The potential for renewable energy in the region is not confined to Tokelau.  All the Pacific islands experience abundant sunshine, while Fiji, Papua New Guinea, the Solomon Islands and Vanuatu possess large capabilities for solar, wind, hydro and geothermal energy.

There are economic and social imperatives for the region to accelerate its transition to clean development.  The Pacific Islands suffer disproportionately from climate change, while emitting less than one percent of global greenhouse gases.

Large rural populations – especially in the most populous sub-region of Melanesia, where it is unviable to extend a national power grid – are the most disadvantaged, suffering from poor health, transport and education services.

National electricity access rates vary from 98 percent in Samoa to 13 percent in Papua New Guinea, but overall about 30 percent of the region’s population of 10 million has access to power.

Reducing the region’s reliance on fossil fuels is critical to development gains.

“The Pacific has a massive problem in importing its fossil fuel requirements, largely for power generation and transportation,” Anirudh Singh, associate professor of physics at the University of the South Pacific in Fiji, told IPS.

“This is due to its isolated and scattered small populations. And replacing these fuels is the top priority as the import bills are exorbitant.”

Petroleum comprises 32 percent of Fiji’s total imports and 23 percent of the Tonga’s, while Samoa, Fiji, Vanuatu and the Solomon Islands rate among the most oil price vulnerable countries in the world.

Transport to outer island settlements can add a further 20 to 40 percent to the price of fuel.

Fiji plans to convert to 100 percent renewable energy by 2013, while the Cook Islands, Niue and Tuvalu are aiming for 100 percent electricity generation from renewable sources by 2020.

The Solomon Islands and Federated States of Micronesia have announced targets of 50 percent renewable electricity generation by 2015 and 2020 respectively.

Geoff Stapleton of the Sustainable Energy Industry Association of the Pacific Islands (SEIAPI), headquartered in Sydney, Australia, commented that the Cook Islands “are confident that they can reach 80 percent (renewable energy) by 2018.”

“The real difficulty is getting equipment to the more remote islands,” Stapleton explained. “Shipping is expensive and irregular and this causes issues (with) installation, maintenance and repairs.”

Singh identified that knowledge capacity in the region also needs to be developed.

The University of the South Pacific is a partner in Project DIREKT, the Small Developing Island Renewable Energy Knowledge and Technology Transfer Network, a collaboration between universities in Germany, Fiji, Mauritius, Barbados, Trinidad and Tobago who are all working to raise the level of scientific expertise in African, Caribbean and Pacific small island developing nations.

Other recent initiatives include the 66-million-dollar Pacific Environment Community Fund (PEC), financed by the Japanese government and administered by the Pacific Islands Forum, which has enabled island nations to each access up to four million dollars over the past year to develop solar energy projects and expand rural electrification.

PEC-funded projects have brought power to the lives of more than 10,000 people in the Solomon Islands; will reduce Samoa’s fuel usage by 135,000 litres per annum; and, in the Federated States of Micronesia, reduce carbon emissions by 500 tonnes and induce fuel cost savings of 486,000 dollars per year.

Singh predicts, “Small island nations will probably become self-sufficient in grid energy supply by 2050. This will be due to aid money readily available, as well as significant recent reductions in the price of solar PV panels, making grid-connected PV systems affordable and cost-effective in the future.”