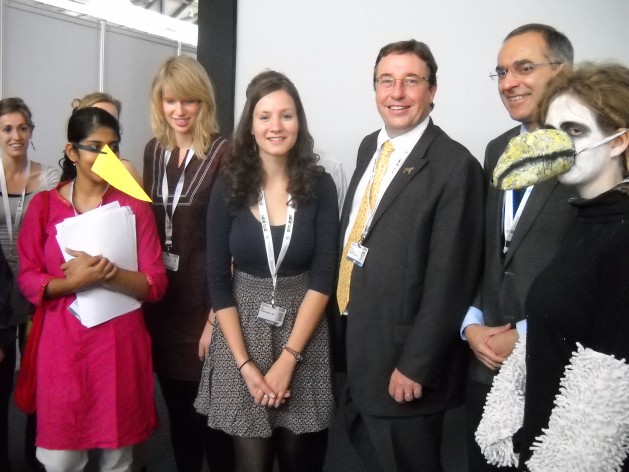 HYDERABAD, India, Oct 18 2012 (IPS) - With negotiations to mobilise resources for preservation of biodiversity at a major United Nations conference going nowhere, the Group of 77 and China have hinted at  possible suspension of the ‘Aichi targets’  under the Nagoya Protocol.

Algeria, current G 77 chair, stressed in a statement at the 11th Conference of Parties (COP 11) to the CBD, underway in this south Indian city, that developing countries had made significant commitments at COP 10 in Nagoya, Japan, on the expectation that financial resources would be forthcoming to meet the Aichi targets.

The Algerian statement hinted that unless COP 11 – which ends Friday after almost two weeks of fruitless negotiations – addresses the issue of resource mobilisation the gains at Nagoya would be negated and the momentum towards realising the Aichi targets lost.

G 77, a loose coalition of 77 developing countries, now expanded to 132, was founded in 1964 to promote the collective economic interests of members and create joint negotiating capacity at the U.N.

At stake now are the 20 Aichi targets aimed at halving the rate of loss of natural habitats, conserving 17 percent  terrestrial and inland water areas, 10 percent of marine and coastal areas, restoration of biodiversity by up to 15 percent with countries implementing national biodiversity strategies and action plans by 2015.

Resource mobilisation has been the most contentious area of negotiations at Hyderabad. Developing countries, home to rich biological diversity, are now doubtful that the promise of increasing financial resource flows from developed to developing countries by 2015 will materialise.

Developed countries are firm that a baseline is necessary to determine the sum that is already being spent and that needs to be increased. But developing countries are pushing for commitments on interim figures.

Experts say funding from diverse international and national sources, and across different policy areas, is required to secure the full range of economic and social benefits to be gained from meeting the Aichi targets.

A high-level ‘Global Assessment of Resources for Implementing the Strategic Plan for Biodiversity 2011-2020’, sponsored by Britain and India and released at the COP 11, informs that addressing the drivers of biodiversity loss and ecosystem restoration, over the 2013 – 2020 period could cost hundreds of billions of dollars.

“Whilst there are some big numbers in this report, our panel found that the greatest resource needs are around reducing the direct drivers of biodiversity loss – those which occur throughout our economies and societies,” said Pavan Sukhdev, an economist and goodwill ambassador of U.N. Environment Programme at the COP.

Sukhdev who is also chair of the Global Assessment of Resources (GAR) report said if the direct drivers of biodiversity are addressed, they will “deliver benefits, far beyond biodiversity, to human health, livelihoods, and sustainable development.”

Sukhdev said research is needed to “fully assess cross-benefits cutting across many areas” and noted that the “drivers that destroy biodiversity are multifarious, climate change being one of them.”

India, in a show of commitment to cutting biodiversity loss, had Prime Minister Manmohan Singh pledging 50 million dollars at COP 11 to strengthen technical, institutional and human capacity building in India, and to also help other developing countries.

India is one of the six countries, out of the 193 members of the CBD, to have ratified the Nagoya Protocol.

Clarity on how much funds would be necessary to globally implement the Aichi targets is yet to emerge at COP 11 with experts reluctant to quote numbers.

“It may be good not to look at numbers. The roadmap to achieving the Aichi targets is important. Setting interim targets would be more practical; we do not till now even know the entirety of biodiversity,” said M.F. Farooqui, a key official in India’s ministry of environment and forests.

“Two-thirds of the proposed outlay for the Aichi targets is in the form of investment. But in initial stages, estimates like this can only be approximations,” Sukhdev told IPS.

“Funding for biodiversity should not be seen as costs but as investment for future global well being,” Braulio Ferreira De Souza Dias, executive secretary of the CBD, commented while speaking with IPS.

The other view among experts is that more than financial investment, policy change is important for saving biodiversity.

“It is not true that funds will flow from the North to the South. This may be the catalyst but nationally designed policies will make all the difference,” said Carlos Manuel Rodriguez, a senior environmentalist from Costa Rica associated with the GAR report.

“Costa Rica tripled per capita income and doubled forest cover by investing in institutional transformation,” Rodriguez said. “The same policies that caused the problem in the first place cannot continue. There is an urgent need to understand the need for appropriate policy development.”

Steinem was satisfied that countries were increasing their investments in biodiversity. “This is not an issue of one moment or nothing… resource mobilisation is supposed to be for accelerating these efforts.”

“It (funding by developed nations) is not charity, it is a compelling rationale,” said Steinem. “You cannot leave Hyderabad without numbers.”