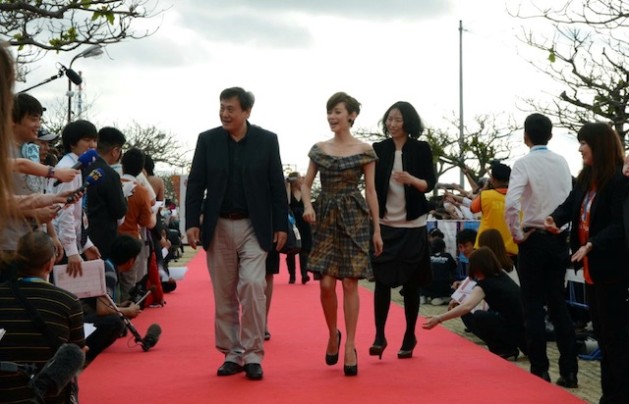 GINOWAN, Japan, Apr 10 2013 (IPS) - The island of Okinawa has long been known as the base camp for a majority of the United States’ 50,000 troops in Japan. But now, against the backdrop of escalating nuclear threats from North Korea, local leaders are pushing hard to promote this island – the largest of 60 that comprise Japan’s southern prefecture – and its surrounding islets as a lucrative site for commercial enterprises.

“Okinawa, with its unique culture and natural surroundings, wants to expand its tourism industry and become an Asian hub for education and entertainment,” Shigenobu Asato, chairman of the Convention and Tourism Bureau, said in his keynote address at the Okinawa Film Festival that ended Mar. 30.

“The Okinawan slogan now is ‘Be Innovative’,” he added, referring to official efforts to push investment in entertainment and entrepreneurial activity on this island.

Under the terms of the U.S.-Japan Mutual Cooperation and Security Treaty Okinawa is home to two-thirds of U.S. military and naval bases in Japan and has long played a critical role in East Asian security. For the U.S., the archipelago fanning out into the Pacific Ocean towards Taiwan is the perfect spot from which to observe – and contain – China’s naval presence in the region.

The island witnessed the only land battle fought between Japan and the U.S. in World War II that ended with Japan’s defeat in 1945. Though the U.S. handed control over the island back to Japan in 1972, it retained bases on 18 percent of the territory, a situation that over 90 percent of Okinawans continue to protest today.

Striking an upbeat note about an incendiary topic, Asato outlined a host of new strategies developed by local governments in the prefecture—such as plans to establish university campuses and transform the island into an Asian entertainment centre — as priority goals in a bid to replace Okinawa’s dependence on military bases.

Currently, U.S. military and naval bases lease large swaths of land, mostly in central and southern Okinawa where 80 percent of its 1.5 million residents live. The rent, which amounts to a little less than six percent of the prefecture’s gross income, supports local landowners and allows those areas hosting camps to receive large government subsidies: In 2012, central government subsidies for Okinawa amounted to over two billion dollars; in 2013, the number was estimated at 3.1 billion dollars.

The U.S.’ military presence has shored up the island’s struggling economy: Okinawa’s per capita income is roughly 20,000 dollars, the lowest in Japan. The bases have not only provided rent and subsidies but have created a market for entertainment venues, bars, restaurants and taxi services for military personnel.

But the resulting social and political costs have been high.

The security cooperation treaty brought with it impunity for U.S. servicemen based here. A wave of violent crimes – including several rapes of local women — by U.S. personnel, combined with environmental damage and pollution, pushed many more Okinawans into the ranks of the anti-military base protest movement.

With opposition heating up since last November, local officials have been working hard to “wean” Okinawa’s economy off the military bases.

The city of Ginowan, home to military stations like the controversial Futenma Air Base, is one of the locations in urgent need of alternative forms of development and income.

Ginowan Mayor Atsushi Sakima used the recent film festival as a platform to present plans for the establishment of the Ginowan City Entertainment Village, an ambitious project being done in partnership with Yoshimoto Kogyo Company, a major mainland-based player in the entertainment industry. The project aims to establish art schools and creative spaces as alternatives to military sites.

“Making peace with the Okinawans has become a crucial domestic challenge for Abe. Okinawa (has been) a vexing issue for Japanese prime ministers, (none of whom) have made much breakthrough,” Tetsuo Kawakami, professor of international relations at Takushoku University, told IPS.

He believes the hawkish prime minister is especially keen to win Okinawa’s support for his attempts to change Japan’s “peace” constitution that “renounces war as a sovereign right of the nation and the threat or use of force as means of settling international disputes” under Article 9.

Abe argues that constitutional revision regarding this article is crucial to guarantee Japan some protection and make provisions for self-defense as tensions rise in the Asia Pacific region.

The latest annual Diplomatic Blue book report unveiled last week by Japan’s Foreign Ministry stressed the need for strengthening the Japan-U.S. Security Alliance to contain “threats” to Japan’s land, sea and airspace and the lives of its people.

The report cites territorial clashes with China over the Senkaku Islands in the East China Sea, claimed by both sides. Known in China as Diayou, the chain of uninhabited islets is rumoured to shelter large deposits of natural gas. Though the territory has long fallen under Japanese jurisdiction, South Korea, which refers to the islands as Dokdo, and Taiwan, calling them the Tiaoyutai Islands, have also laid claim to the archipelago.

Set against this tense background, the Japanese government made the landmark decision last week to publicise its timeline to return land leased to the United States military near the Kadena Air Base in Okinawa to the municipal government.

The deal was reached last year, based on the condition that U.S. troops would be transferred overseas. Abe has attempted to accelerate the process with Washington with the intention of nudging Okinawa to agree to the relocation of the Futenma Air Base in the densely populated city of Ginowa to Nago, a picturesque seaside resort.

Miko Higa, who heads the Okinawa-based Research Institute for Peace and Security, told IPS the government’s proposal to return the land at the Kadena base is welcome, but will face opposition if linked to the concept of relocation.

“The core issue facing Japan’s security is building trust with Okinawa. That process will take long and should not be linked to Abe’s defence plans that aim to strengthen military relations with the United States, which will be a heavy burden on Okinawa,” he said.

A Mar. 23 editorial in Okinawa’s leading newspaper ‘Ryukyu Shinpo’ expressed similar sentiments, describing Abe’s proposed plan as “nothing less than a denial of democracy in Japan”.

Now, according to Higa, “Abe faces an excruciating gamble” – and so do the people of Okinawa, who may only experience peace at the expense of economic security.