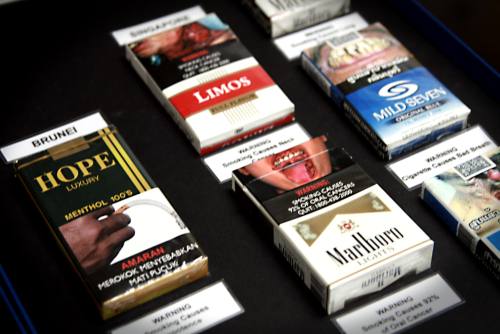 A large portion of cigarette packages must be devoted to warnings on the health risks of smoking. Credit: Kara Santos/IPS

RIO DE JANEIRO, Apr 4 2013 (IPS) - Brazil has taken another step to combat the harmful habit of smoking with the creation of the Centre for Studies on Tobacco and Health (CETAB).

But the new centre, established by the state-run Oswaldo Cruz Foundation (FIOCRUZ) as part of the Sergio Arouca National School of Public Health, has set its sights even further. CETAB will also undertake research on three other risk factors for non-communicable chronic diseases, in addition to smoking: excessive alcohol consumption, lack of physical activity, and poor eating habits.

In 2011, Brazil adopted the Strategic Action Plan to Combat Non-Communicable Diseases, such as cancer, diabetes, heart disease and respiratory ailments.

“We are going to focus on these and conduct research on the risk factors. Cigarette smoking stands out as one of the worst villains. It offers no benefits whatsoever. There is no such thing as a reasonable level of cigarette smoking that could be considered harmless. It has only negative effects,” the coordinator of the new centre, Vera da Costa e Silva, told Tierramérica.*

The Ministry of Health will devote 6.2 million dollars to the plan adopted in 2011, which establishes actions to be undertaken up until 2022.

The World Health Organization (WHO) considers tobacco to be the leading preventable cause of death in the world, and estimates that about a third of the global population aged 15 and older, or one in three adults, are smokers.

The more than 4,700 toxic substances found in tobacco smoke make it a cause of roughly 50 different diseases.

In Brazil, lung cancer is the most lethal type of cancer and also one of the leading causes of death.

Reducing exposure to the risk factors associated with diseases will make it possible to reduce the incidence of the diseases as well, stressed Costa e Silva.

CETAB will focus on teaching, research and technical cooperation, both within Brazil and abroad.

“We want to work with information, education, regulation and public policies for prevention. We are going to provide health care professionals in the public health system with training and treatment options for the risk factors. The courses we offer can be taken long-distance,” said the CETAB coordinator.

In terms of international cooperation, the centre plans to work with other countries in Latin American as well as Portuguese-speaking African countries. This will mean sending Brazilian specialists to the offices that FIOCRUZ operates abroad, such as in Mozambique, and attracting specialists from these other countries to Brazil.

CETAB also plans to support the efforts of WHO and the Pan American Health Organization (PAHO).

“We have already had good returns with them as international partners, and we see a number of possibilities on the horizon,” said Costa e Silva.

The centre is starting out with a team of nine researchers from fields such as economics, engineering, pharmaceuticals, medicine and biology.

Tobacco use is an epidemic and the biggest known risk factor, according to the president of Brazil’s National Academy of Medicine, Marcos Moraes.

In the late 1980s, almost 40 percent of Brazilians were smokers. In 25 years, this percentage fell to around 15 percent. Brazil currently has a population of 192 million.

“We achieved these results thanks to the control measures we have adopted,” Moraes told Tierramérica. “The tobacco industry is always very active, even though they are fully aware that they are selling a disease, and our goal is for the country to safeguard its health and prohibit the sale of harmful products,” he added.

Moraes reported that a marked decline in smoking has been observed in middle-class youth, although there has been a “slow but steady increase” in young smokers from poorer segments of the population.

“One of the most important strategies for combating tobacco use is raising the price of cigarettes. In 2012, Brazil increased taxes on cigarettes substantially, but they are still among the lowest in the world. Where there is poverty, there is smoking,” said Moraes.

According to WHO, he added, for every dollar collected through these taxes, 4.5 dollars are spent on health care for tobacco-related diseases.

Around 10 billion dollars of public health care spending in Brazil goes towards the treatment of problems caused by smoking, while the revenues earned through taxes on the tobacco industry amount to only three billion dollars, he noted.

Statistics on the evolution of the number of smokers in Brazil serve as a measure of the efficacy of the country’s prevention policy, but “this policy is always under threat,” he warned.

Although it is recognised as an example for the rest of the world, Brazil cannot celebrate or “set off fireworks, because this is an ongoing battle,” Moraes commented.

The creation of this new study centre will serve as another tool to contribute to the work of the network of institutions already active in this area.

Brazil is frequently called upon to provide international cooperation and share its experiences in the fulfilment of the WHO Framework Convention on Tobacco Control, which sets out specific steps for governments to combat tobacco use.