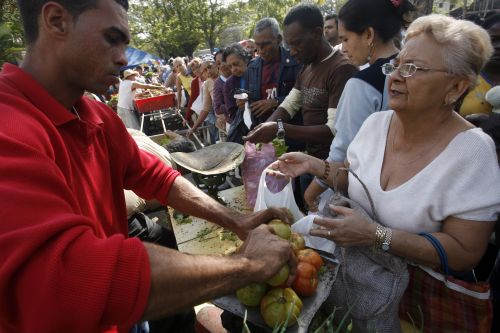 Nearly 18 percent of the Cuban population is over 60, most of them women. Credit: Jorge Luis Baños/IPS

HAVANA, Apr 29 2013 (IPS) - Paediatrician Grisel Navarro says she is “a different kind of retiree,” because she still practises her profession, goes out and about and refuses to be “at the beck and call of her family’s and everyone else’s needs,” something that diminishes quality of life for many Cuban women when they retire from work.

Navarro retired five months ago and now has a part-time job at the “Ángel Arturo Aballí” Hospital in Havana. “I’m still working at what I like, but at a gentler pace,” this 62-year-old member of a generation of women who have by far excelled the educational and employment attainments of their mothers told IPS.

Women in this Caribbean island nation who are now reaching retirement age, raised in 2008 by the authorities from 55 to 60 for women and from 60 to 65 for men, had mass access to education from infancy onward, and the majority took jobs.

They did so imbued by the so-called “revolution within the revolution,” as women’s emancipation was known as part of the process begun in 1959 in Cuba, which raised women’s participation and made strides such as wage equality with men.

However, activists today are advocating even greater changes in support of gender equity, and calling for public policies targeting the particular needs of women and girls in this country of 11.2 million people, where machismo is still strong.

Older women like Navarro aspire to “living a full life as older adults,” but their dream may be frustrated by factors like gender-related and age-related disadvantages, such as the low incomes of many older women.

The responsibilities of caring for the home, children and the sick remain firmly on their shoulders. Increasingly they are widowed and left alone, looking after grandchildren when young people leave the country, and many of them lack economic security because they have always been homemakers or receive only tiny state pensions.

“Women are living longer, but they tend to suffer from poor health, or from episodes of disability or disease, which result in lower quality of life,” demographer Sonia Catasus told IPS. “This phenomenon is to some extent due to factors linked to gender subordination.”

The life expectancy of Cuban women is 80.7 years, compared to 76.6 for men. The trend is for these figures to rise for both sexes, according to the Office of Statistics and Information (ONEI).

The span of years between retirement and death is increasingly lengthening for the population. This demonstrates the social and healthcare advances in the country, but at the same time constitutes a challenge to the economy, which is typical of developing nations.

Cuba is also still trying to emerge from the severe crisis it has suffered for more than 20 years.

For biological reasons, women live longer on average than men in all latitudes, Catasus said. That is why the process of “feminisation of ageing” is being discussed globally as a matter that requires special treatment on the part of governments.

Furthermore, three out of 10 older Latin American women were aged over 75 in 2010.

This scenario will be more critical in the near future, as it will affect families, care systems, carer support systems, social assistance and health services, and the way the labour force is planned in countries like Argentina, Brazil, Chile, Costa Rica, Cuba, the Dominican Republic, Puerto Rico and Uruguay.

The report “Ageing in the Twenty-First Century: A Celebration and a Challenge” published in 2012 by the United Nations Population Fund (UNFPA) estimates that by 2050, 25 percent of Latin Americans will be over 60.

By then, Cuba will be among the 11 countries with the most elderly populations on the planet, with 38 percent of it population aged over 60.

While adequate pensions and health services are vital to improving quality of life for the elderly, Caridad Pegudo, a 67-year-old retired teacher, says it is essential to “be prepared and change your attitude.”

“We (older women) need to get outdoors and not stay at home all the time, as we tend to do. When we go out, we need to pay attention to our appearance, and always talk to other people,” Pegudo, a member of Tula, a group of women who sew patchwork handcrafts, told IPS.

“Keeping socially active helps us stay well and puts us in touch with new knowledge,” said this Havana resident, who in late March attended the Third Meeting on Meditation, a community initiative in Havana that attracted over 1,000 participants, especially older women.

“Women have been trained to look after their families and other people. But with the changes nowadays, many older women are worrying more about themselves. I think meditation helps them reconnect with themselves, and has benefits for their health,” said Juan Dávila, the president of the organising committee.

A number of other civil and state initiatives offer support to Cuba’s growing elderly population, including the more than 500 branches of the University for Older Adults offering courses on progress in modern science, and “Grandparents’ Circles” for carrying out physical exercises in groups.