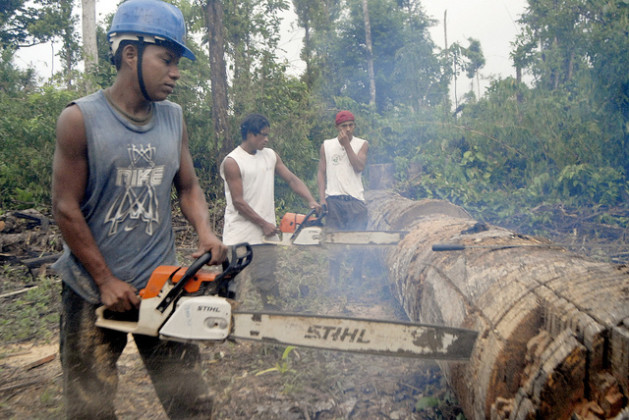 The offsets would serve as a mechanism by which emissions-producing companies in California could continue to pollute if they compensate foreign governments for the protection of their own forests.

"The carbon market is just proving to be extremely complicated, and not benefiting people at all." -- Bill Barclay of Rainforest Action Network

But critics say the consequences of such a policy would have repercussions that extend far beyond the environment.

“Independent investigations into the promotion of international forest offsets have raised serious concerns related to human rights violations and there is major opposition from indigenous peoples and local communities in both Chiapas, Mexico and in Acre, Brazil,” the groups said in an open letter sent this weekend.

Environmental groups say the move would simply shift the pollution from one country to another, rather than addressing the root causes of deforestation and climate pollution. The scheme would also create another set of economic and social problems for the communities in the regions paid to preserve their forests.

“Offsets are problematic in a number of ways,” Jeff Conant, director of the International Forests Programme at the U.S. office of Friends of the Earth, an activist network, told IPS. “First, they don’t actually reduce emissions. They just misplace emissions.”

The recommendations to include the offsets in new climate change-related legislation in California (known as AB-32) came from the REDD Offset Working Group (ROW), formed to implement a collaborative effort designed by the United Nations called REDD (which stands for Reduced Emissions from Deforestation and Forest Degradation).

As described by the U.N., REDD is “a mechanism to create an incentive for developing countries to protect, better manage and wisely use their forest resources, contributing to the global fight against climate change.”

Although California’s AB-32 already has a domestic offset exchange programme, the move to expand it globally prompted a vehement response last week from groups in Mexico worried about the possibility of “land-grabbing”.

“This Agreement is underpinned by the logic of capitalist accumulation: it enables the purchase of carbon credits that will legally allow the continuation of the predatory and consumerist model.”

The response recommends instead that the “consumerist countries of the North … implement urgent mechanisms to reduce greenhouse gas emissions without substitutions or offsets, and with a focus on the reduction goals of their own countries”.

“In Chiapas, you have customary titles and [land] rights that haven’t been fully resolved,” Bill Barclay, climate policy advisor at Rainforest Action Network, and advocacy group based here, told IPS.

“It’s a very complicated situation, and when you bring in someone who might come in and impose that and do it quickly and cheaply, it elevates social conflict.”

These critics are also wary of the potential pitfalls that could accompany payments to countries with little oversight and government accountability.

“Once you involve international entities – especially the most impoverished states in the hemisphere – you’re getting to a state … with a lot of gaming, corruption, fraud and error,” Jeff Conant says.

Activists say these problems shine a light on the broader complications that tend to lurk in a system as complicated as emissions trading or “carbon markets”.

“This is about the most complicated way you could come up with to try to bring money into the market to reduce emissions and generate innovations,” Conant says.

“There’s an ideology that says that allowing the markets to fix the climate problem is the most efficient way to go… Unfortunately, [the market] does not work in the favour of the most marginalised communities that are on the front lines.”

In fact, carbon offsets have critics even among pro-market economists. The new letter references the findings of a 2011 report that examined REDD from a “market perspective”, using the authors’ “experience in derivatives trading and systems architecture”.

Known as the Munden Report, it found that “using carbon markets to finance REDD… is likely to be a drain of resources, both in terms of money and time, away from the very serious problems REDD seeks to address.”

The letter from environmental groups also comes just as new reports have emerged on collapsing carbon prices in Europe, where the world’s first and most established carbon market is floundering.

Although the European system decided not to rely on forest offsets, many are still suggesting that the collapse of the E.U. carbon prices could have ripple effects for similar markets worldwide, particularly as advocates push for interlinking these systems down the road.

Both the price collapse in Europe and the social consequences of an international carbon offset exchange have bolstered support for the more direct carbon tax. Although this has been the preferred mechanism by environmental groups, it continues to be thought politically unviable in the U.S., at least for the time being.

“I think there is going to be a greater shift to carbon fees and away from carbon markets,” Barclay of the Rainforest Action Network told IPS.

“The carbon market is just proving to be extremely complicated, and not benefiting people at all. There’s just too much gaming and speculation, and it’s been too poorly regulated.”