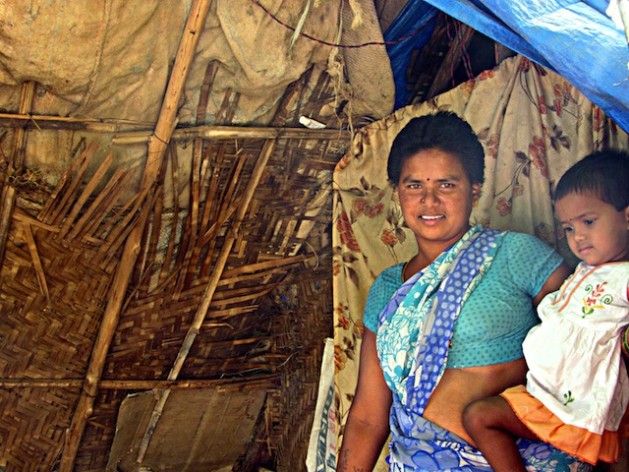 Laxmi Yarragantla, a 20-year-old mother of three, lives in the Warangal district, where over 50 percent of girls are married before they reach 18 years. Credit: Stella Paul

HALDIYAGANJ, India, May 28 2013 (IPS) - In the small village of Haldiyaganj in the northeastern Indian state of Meghalaya, 17-year old Injuara Begum is nursing her son who was born right here on the floor of her home three years ago.

She has never heard of Janani Suraksha Yojana (JSY), a government health scheme that provides free medicine, midwife assistance and 30 dollars in cash to all pregnant women who deliver at a government hospital.

“In marginalised communities, early marriage is the only way to…ensure a girl’s physical safety.” -- Mamatha Raghuveer
Nor is she aware that marriage before 18 years of age is illegal and punishable by law. “My parents arranged my marriage when I was fourteen,” she tells IPS in a whisper – a result of shyness coupled with intense fatigue that has plagued her ever since giving birth.

Injuara comes from a poor Muslim family that migrated to India from Bangladesh in 1980. Her father, a brick kiln worker, says the early marriage was intended to “protect his daughter’s future” in this volatile border village where there are few opportunities for women beyond motherhood.

Injuara’s story is indicative of a worrying trend in India, where, according to a 2012 study by the United Nations Children’s Fund (UNICEF), 22 percent of women become mothers before the age of eighteen.

Research indicates that over 70 percent of these child mothers are from marginalised groups like the Scheduled Caste (Dalits) and other tribal communities, who comprise 24 percent of the country’s total population of 1.24 billion people, or refugees who have few economic opportunities.

Experts say lack of access to, and awareness of, health services compounds the problem.

The exclusion of marginalised women from health services is holding India back from achieving the Millennium Development Goals, which set the target of reducing maternal mortality and achieving universal access to reproductive healthcare by 2015.

According to the UNFPA, 25 percent of the 56,000 maternal deaths in India in 2010 occurred within marginalised communities.

D C Sarkar, head of the Haldiyaganj Public Health Centre, tells IPS that most first-time mothers here are below 18 years. “Almost 70 percent of them suffer from low haemoglobin levels and weakness,” he said, which results in premature deliveries and miscarriages.

Since his own centre is ill equipped to deal with pregnancy-related complications, he often refers his patients to the district hospital. But it is an exercise in futility, since none of the village’s residents can afford to pay hospital fees.

Sunil Dhar, one of the leading gynaecologists in the northeastern region, says over 70 percent of his patients are from minority communities, while most are below the age of 20.

Drawing on his 50 years of medical experience in the border state of Tripura, Dhar told IPS, “Over 50 percent of my patients are as young as 14 and 15. Elderly female relatives, who want to know the health of the foetus, usually accompany the young girls who come here – but one look at the expecting mother tells me she is the one in need of treatment,” for conditions like jaundice, or swollen ankles.

He links poor health and early marriages to the socio-economic status of refugee communities in these northern border regions, where over two million people fleeing the bloody Liberation War in Bangladesh arrived in 1970.

The 1990s also saw an influx of refugees from Myanmar (formerly Burma) and the Chittagong Hill districts of Bangladesh. Still living in abject poverty in informal camp settlements, these communities “can’t be expected to go to the hospitals – the hospitals must come to them,” according to Dhar.

Further south, in the central Indian state of Chattisgarh, a Gond tribal woman named Khemwanti Pradhan tells IPS she was married at 15, and became pregnant shortly after.

A resident of the Sindurimeta village in the conflict-ridden Bastar region, she was forced to delivered both her sons at home because the closest health centres were shut when she went into labour late at night. “My mother-in-law helped me cut the umbilical cord,” she said.

An ongoing Maoist insurgency against the government keeps most people indoors for fear of being caught in the crossfire.

Though Pradhan was aware of the JSY government health scheme, violence prevented her from accessing the services. “Doctors and nurses will not work after dark because they are scared of the Maoists. No transport is available after four in the evening. If our men go out to fetch a car or a doctor, army personnel suspect them of being terrorists and arrest them for interrogation,” she lamented.

According to UNICEF, over 52 percent of girls in the Warangal district of the southern Indian state of Andhra Pradesh are married in their teens. Experts say the region is in dire need of targeted interventions that can slow this trend.

Here, an NGO called ‘Thaurni’ trains adolescent girls from vulnerable communities, such as children of migrant labourers, landless farmers and nomadic tribes, to become anti-child marriage campaigners. In the past five years, the organisation has stopped 56 child marriages in the district.

Still, hundreds of girls continue to get married every year because existing laws do not cater to their specific problems, Mamatha Raghuveer, head of Thaurni, told IPS.

“According to the Prohibition of Child Marriage Act, anyone found guilty of planning or conducting a child marriage can be fined up to 2,000 dollars and also be jailed for a maximum of two years.”

But while this law has relevance for mainstream society, where families have other options, it does not address the specific problems in marginalised communities.

For people in dire economic and political straits, living in regions where rape and sexual abuse is rampant, “early marriage is the only way to…ensure a girl’s physical safety.” Unmarried teenagers face untold risks, including being kidnapped and sold to brothels. “We need a policy that focuses on reaching out to these people,” Raghuveer stressed.

According to Swapan Debnath, a local homeopathy practitioner and school teacher in Tripura, the prevailing “anti-immigrant” climate in India also forces many families to turn to early child marriages as insurance against deportation.

Debnath hopes that the Women Deliver global health summit, scheduled to run from May 28 to 30 in the Malaysian capital Kuala Lumpur, will provide the perfect opportunity to discuss such integrated strategies.

While activists and experts from around the world debate on what action can be taken, women in vulnerable situations have no choice but to rely on the support of their families.

At the moment, Injuara is happy that her husband Zakir Mohammed is not asking for another child just yet.  Since contraceptives and abortions are considered a sin, family planning means abstaining from sex – something that her husband has agreed to do until she regains her strength. “I am happy,” she says, “that he understands.”