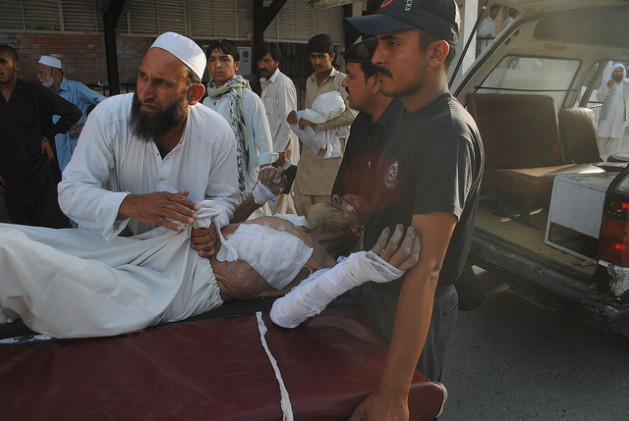 Victims of a May 17 explosion at a mosque in a village in Malakand district of Khyber Pakhtunkhwa province, which killed 13 people. Credit: Ashfaq Yusufzai/IPS

PESHAWAR, May 27 2013 (IPS) - Peshawar is breathing a little easier. Prime minister designate Nawaz Sharif’s offer of talks with the outlawed Tehreek-e-Taliban Pakistan (TTP) has rekindled hope for peace in this Pakistan border town.

The TTP have had a long run of terror in Pakistan’s northwestern Federally Administered Tribal Areas (FATA) and the adjacent Khyber Pakhtunkhwa (KP) province, of which Peshawar is the capital. And the terror had intensified in the run-up to the May 11 elections in the country, as bomb and suicide attacks left a bloody trail of political casualties in the region.

Tackling terrorism, therefore, would have been the foremost priority of any government that came to power. And when the Nawaz Sharif-led Pakistan Muslim League (PML-N) emerged the winner, the mandate before it was clear.

Sharif’s statement that “talking to Taliban was not a bad option” has sent a wave of relief among the residents of KP, and of FATA in particular, which has borne the brunt of the militancy since 2001.

Especially as the TTP has responded favourably. Its spokesman Ihsanullah Ihsan welcomed the offer and considered it a positive sign. “We are devising a strategy over the course of action to be taken in response to the peace talk offer,” he said.

Terrorism is the number one problem the new government needs to solve if it is to put Pakistan on the path to progress, PML-N activist Rehmanullah Khan told IPS. “We have lost 49,000 people, including 5,000 soldiers, to the Taliban since 2005,” he said.

Other parties too have endorsed this initiative. The Pakistan Tehreek-e-Insaf party (PTI), under the leadership of former cricket legend Imran Khan, had, in fact, been at the forefront of a campaign to hold a dialogue with the militants.

The party will now be forming a government in coalition in Khyber Pakhtunkhwa. It has appointed Pervez Khan Khattak as the chief minister.

“We are according top priority to the establishment of peace and ending terrorism,” he told IPS. Without stopping terrorism, he said, there can be no prospect of social and economic development.

“The army has been engaged in a military operation in FATA since 2005,” Khattak added. “But the outcome has been zero and the TTP is still calling the shots in the majority of the seven tribal districts under FATA.”

If you have not been able to eliminate them by force in the last eight years, he said, talks would be your best option.

Regarding Sharif’s offer of the olive branch to the Taliban, Dr Said Akram at the political science department of the University of Peshawar told IPS that the Taliban had in March this year offered to talk with the government. “But the then government (led by the Pakistan People’s Party) did not show an interest, due to which no headway was made,” he said.

At that time, the TTP had also asked Nawaz Sharif, who was then in the opposition, as well as religious leaders like Maulana Fazlur Rehman of the Jamaat Ulema-e-Islam (JUI) and Syed Munawar Hassan of the Jamaat-e-Islami, for guarantees before the dialogue.

“While in opposition, Nawaz didn’t become the guarantor, but now that he is in government and prime minister, it would be his first priority to start negotiations with the TTP,” said Akram.

Both the PML-N and PTI have also sought the help of Maulana Samiul Haq, chief of JUI’s other faction, and patron-in-chief of Pakistan’s biggest Islamic seminary, Darul Uloom Haqqania, to facilitate talks between the government and the TTP.

But he needed the full guarantee not only of the PML-N and PTI but also of Pakistan’s army chief Gen Ashfaq Pervez Kayani, he said, before launching a formal dialogue process with the TTP.

“We are sure that peace will prevail if the government, opposition, army and the Taliban display sincerity,” he said.

Muhammad Aslam Khan, a Pakistan Studies teacher at the Abdul Wali Khan University in Mardan, 50 km northeast of Peshawar, says it’s the brightest chance for the government to rein in the TTP. “The government needs to take the peace offer seriously if it wants to have peace in the future,” he said.

In fact, the people had voted for the PML-N and PTI precisely because of the failure of the Pakistan People’s Party (PPP) and Awami League Party (ANP) to maintain peace, Khan added. They saw hope in the former’s slogans of peace and would be very disappointed if they too failed to contain terrorism.

However, even the ANP, which had been in power in Khyber Pakhtunkhwa for the last five years and on a collision course with the TTP, having lost 800 of its leaders and workers in sustained attacks by the group, is in favour of making peace with them. “We want peace at any cost and will support the government because people have become sick of terrorism,” ANP spokesman Zahid Khan told IPS. Peace, it would seem, finally has a chance in Pakistan.