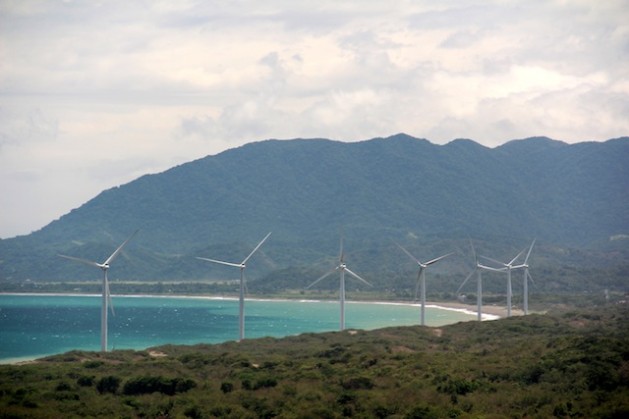 MANILA, May 29 2013 (IPS) - As the Philippines grapples with frequent power outages and a growing demand for energy, government agencies and private groups say the answer to the country’s power needs may lie in alternative sources.

Currently, three million households lack access to electricity in this country of 94 million people. Some provinces only have electricity for several hours each day, while countless households on the country’s more remote islands still rely on diesel-powered generators.

“While prices for fossil fuels and diesel will only escalate in the coming years, prices for renewable energy will be pegged at the same rate for the next 20 years.” -- Mario Marasigan
Energy rates in the country remain among the highest in Asia, placing a heavy burden on the 26 percent of the population that lives below the poverty line.

According to a 2011 survey by the Japanese External Trade Organisation (JETRO), electric rates in Manila were pegged at 0.23 dollars per kilowatt-hour (kWh), higher even than Tokyo and Singapore, which both stand at 0.20 dollars per kWh.

A growing demand for energy has accompanied the Philippines’ economic growth, which hit 6.6 percent in 2012, according to the World Bank. Supply can barely cope with the increasing demand, which is projected to grow by four percent annually from 2011 to 2015.

In light of this, the country’s Department of Energy (DOE) is ramping up renewable energy initiatives.

In a recent forum on enhancing energy security in Manila, director of the DOE’s renewable energy management bureau, Mario Marasigan, said the department has two solar-powered projects in the pipeline, as well as “three wind farms and several hydropower plants, in a bid to reduce dependence on fossil fuels.”

He says the Philippines currently uses between 38 and 39 percent renewable energy in its primary energy mix. DOE figures on gross power generation in the Philippines show that geothermal and hydropower plants each account for 14 percent of renewable power.

Other renewable sources such as wind, solar and biomass are still either underrepresented or nonexistent, and therefore offer the largest potential.

“The DOE has approved three new wind projects to proceed with commercial operations including Alternergy‘s 67.5-megwatt (MW) facility in Pililla (in the eastern province of Rizal), the Energy Development Corp.’s 87-MW wind farm in (the northern region of) IIocos Norte and Trans Asia’s wind farm in Guimaras (a western island province in the Visayas region),” said Marasigan.

So far, the Bangui Wind Farm located on the foreshore of Bangui Bay in Ilocos Norte is the only commercial wind farm in the Philippines. Managed by the North Wind Power Development Corporation, it hosts 20 wind turbines with a total rated capacity of 33 MW.

Solar power also remains largely untapped despite its huge potential. The Philippines is still lagging behind in terms of policy implementation and deployment for solar, said to be the most environment-friendly and promising energy source. To date, existing on-grid solar capacity is limited to the one-megawatt CEPALCO Solar Power Plant in Cagayan de Oro, located in the southern Philippines.

The country has set the target of tripling its renewable energy capacity by 2030 to at least 15,000 MW installed capacity.

This will also bring it closer to meeting global targets on carbon emission reduction, since “every kilowatt of electricity from renewable sources (represents a) saving on carbon dioxide emissions,” said Dr. Markus Poller, managing director of M.P.E. GmbH, a German consulting company specialised in wind and solar farm planning.

Environmental groups like Greenpeace believe that bolder moves are in order if the country wishes to secure a sustainable energy future, adding that power generation is still dominated by coal (37 percent) and natural gas (30 percent).

According to Greenpeace Climate and Energy Campaigner Anna Abad, the government continues to embark on projects for coal-fired power plants, even while claiming renewable energy is a priority.

“Despite the passage of the Renewable Energy Law in 2008, the DOE has been approving coal-fired power plants left and right, further stalling the development and mainstreaming of renewable energy systems in the country,” Abad told IPS.

The 2008 law was intended to facilitate implementation of renewable energy projects. It encourages the establishment of various incentives and supportive schemes in order to stimulate investments in renewable energies.

DOE figures cited in the Greenpeace publication Green is Gold show that in addition to ten existing coal-fired power plants, there are 23 others in the pipeline, at least three of which are located in the middle of urban communities.

Abad fears that, once operational, these plants will “edge out any potential for renewable energy and…lock the country into use of dirty energy for the next three to four decades.”

“Variable energy sources like wind and solar energy represent new challenges for the Philippines in terms of forecasting, planning and operation of the power grid, grid stability and market development,” explained Poller, a grid integration expert.

He stressed that planning is crucial, since wind farms need to be built in places where the wind is strongest, often far from urban areas. Meanwhile, hydropower is most viable during the rainy season, and must be tapped accordingly.

Part of the uphill climb for the DOE includes winning support for renewable energy from a consumer base that equates alternative sources with higher prices.

Speaking to the press on the sidelines of the forum, Marasigan dismissed these fears as a “misconception”, adding that the switch to renewables would actually benefit the average consumer “in the long run.”

“While prices for fossil fuels and diesel will only escalate in the coming years,” he said, “prices for renewable energy will be pegged at the same rate for the next 20 years.”

Following a petition by the National Renewable Energy Board (NREB), the Philippines’ Energy Regulatory Commission (ERC) approved an initial feed-in tariff (FiT), which sets a fixed price for each kWh of electricity from a defined source of renewable energy.