UNITED NATIONS, May 6 2013 (IPS) - Secretary-General Ban Ki-moon is one of the most vociferous advocates of a world free of nuclear weapons. 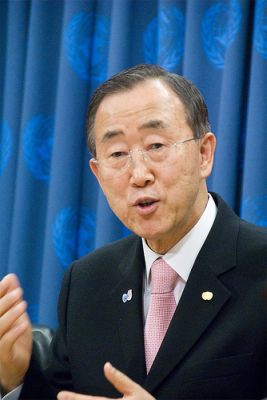 The lack of publicity stands in contrast to the strong public stand taken by Secretary-General Ban Ki-moon, who has consistently called for the total elimination of nuclear weapons. Credit: Bomoon Lee/IPS

“Nuclear disarmament and non-proliferation are not utopian ideals,” he says. “They are critical to global peace and security.”

Still, the Group of 77, the largest single coalition of 132 developing countries, implicitly accuses the United Nations of falling short in its efforts to publicise a meeting on nuclear disarmament scheduled to take place Sep. 26.

He said the meeting is of importance to developing nations, and therefore, all efforts should be made to give it timely and wide publicity.

A G77 delegate told IPS the conference is not getting the advance publicity it should, probably because three of the big powers, the United States, UK and France, are not supportive of the meeting.

“We have not seen anything on the high level meeting so far,” he added.

The lack of coverage stands in contrast to the strong public stand taken by the secretary-general, who has consistently called for the total elimination of nuclear weapons.

Asked about the significance of the upcoming meeting, Dr. John Burroughs, executive director of the New York-based Lawyers Committee on Nuclear Policy, told IPS the meeting is a chance for world leaders, including U.S. President Barack Obama and others, to give direction to the nuclear disarmament enterprise, “which is now drifting aimlessly despite much rhetoric over the past five years.”

“Of course they should reassert that the global elimination of nuclear weapons is a shared aim of the international community,” he said.

But they can and should do more, he said, specifically to set in motion concrete, multilateral processes to achieve that objective.

“If there can be a Nuclear Security Summit process, focused on securing nuclear materials, why can there not be a Nuclear Disarmament Summit Process?” he asked.

Or definitive action could be taken to overcome the 16-year deadlock in the Conference on Disarmament, if necessary by establishing a separate process, Dr Burroughs said.

The resolution calling for the high-level meeting, which was sponsored by Indonesia and the 120-member Non-Aligned Movement, was adopted last December in the General Assembly by a vote of 179 to none against, with four abstentions (Israel, and three of the five permanent members of the Security Council, namely France, UK and the United States).

The other two permanent members, China and Russia, voted for the resolution.

In an explanation of his country’s decision to abstain on the vote, Guy Pollard, deputy permanent representative of the UK, told delegates last December, “We question the value of holding a high-level meeting (HLM) of the General Assembly on nuclear disarmament when there are already sufficient venues for such discussion.”

“We are puzzled about how such a HLM will further the goals of the NPT (Nuclear Non-Proliferation Treaty) Action Plan that was agreed by consensus in 2010,” Pollard said.

“In our view,” he said, “this roadmap of actions offers the best way of taking forward the multilateral nuclear disarmament agenda, along with related issues.”

“We continue to believe that nuclear non-proliferation and nuclear disarmament are mutually reinforcing and therefore regret that this high level meeting doesn’t treat both of these aspects in a balanced manner,” Pollard said.

Meanwhile, in a new study released last month, George Perkovich, director of the Nuclear Policy Programme at the Carnegie Endowment for International Peace, points out one of the few ways that President Obama could restore confidence in U.S. intentions would be to update the declaration of the role of nuclear weapons in U.S. security policy, including in defence of its allies.

“In his searching Nobel Peace Prize speech (in December 2009), Obama recognised the occasional inescapability of war and the imperative of waging it justly,” Perkovich said.

So, too, Obama now could examine how the ongoing existence of nuclear arsenals, even if temporary, can be reconciled with the moral-strategic imperative to prevent their use, says the study titled “Do Unto Others: Toward a Defensible Nuclear Doctrine.”

“The president could articulate a limited framework for the legitimate use of nuclear weapons that the United States believes would be defensible for others to follow as long as nuclear weapons remain,” it says.

Such a nuclear policy, says Perkovich, could then be conveyed in the U.S. Defence Department’s Quadrennial Posture Review, which is due later this year.

Dr. Burroughs told IPS that non-nuclear weapon states have been doing their best to create opportunities to set a clear course on disarmament.

At the initiative of Austria, Mexico and Norway, the General Assembly in 2012 established an open-ended working group on taking forward proposals on multilateral nuclear disarmament negotiations, scheduled to meet for three weeks this summer in Geneva.

Norway hosted a conference in Oslo in March on the humanitarian impact of nuclear explosions.

And Indonesia and the Non-Aligned Movement proposed the resolution last year that scheduled the September high-level meeting on nuclear disarmament.

“However, the P-5 in the Security Council have been recalcitrant. So far they have said they will not participate in the open-ended working group,” said Dr. Burroughs.

They also declined the invitation to participate in the Oslo meeting. And last year the UK, the United States, and France, along with Israel, abstained on the resolution scheduling the high-level meeting, expressing doubt as to its value, he added.

“So the personal engagement of heads of state/government and foreign ministers is clearly necessary,” Burroughs said.

At lower levels, the Permanent Five officials have been floundering, he added.

“Unless there is a change of tune coming from the very top, the September meeting will turn out to be a fruitless exercise,” he said.

The crisis on the Korean peninsula should be a wake-up call.

The nuclear threats exchanged by North Korea and the United States have once again laid bare an often underappreciated fact, the unacceptable risks arising from reliance on nuclear weapons.

In September, P-5 leaders and other governments possessing nuclear arsenals should seize the moment to signal clearly, to their own governments as well as to the world, that they will now engage constructively with non-nuclear weapon states on a process for the global elimination of nuclear weapons, he said.

Parliamentarians, mayors, and civil society groups working for a nuclear weapons-free world should also take advantage of this global platform, which surprisingly is the first time a General Assembly high-level meeting will be held on nuclear disarmament, Dr Burroughs said.