ROME, Jun 21 2013 (IPS) - The U.N. Food and Agriculture Organisation (FAO), which works to end malnutrition among more than two billion people worldwide, is expressing strong support  for enriching the micronutrient content of plants. 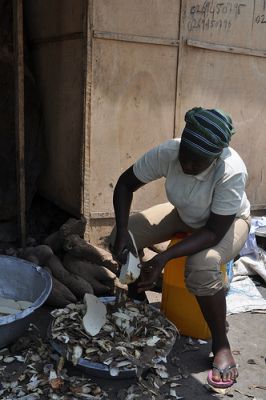 Cassava is a staple crop in Africa. The new variety promoted by CGIAR is more nutritious, contaning higher amounts of vitamin A, zinc, or iron. Credit: Busani Bafana/IPS

In technical terms, it is called biofortification: a nutrition-specific intervention designed to enhance the micronutrient content of foods through the use of agronomic practices and plant breeding.

The breeding is taking place at HarvestPlus, an international programme supported by the Consultative Group on International Agricultural Research (CGIAR) and at national agricultural research centres, mostly in developing countries.

The first nutritious crop, developed by African scientists and released in partnership with the Internal Potato Center (CIP), was the orange sweet potato, which has been effective in providing up to 100 percent of daily vitamin A needs for young children, according to CGIAR.

Six additional nutritious crops are now being developed through the use of conventional breeding methods: vitamin A-rich cassava and maize, iron-rich beans and pearl millet, and zinc-rich wheat and rice.

The first three crops are targeted to Africa and the rest to South Asia.

New varieties of the first four crops were launched in 2012, says CGIAR, with wheat and rice expected to follow later this year.

While it takes time to produce the amount of seed necessary to meet demand, up to half a million farmers will be growing these nutritious crops by year end, it predicts.

Asked how far plant breeding can go in resolving hunger and nutrition problems worldwide, Dr. Erick Boy, head of nutrition at HarvestPlus, told IPS, “Our focus is on hidden hunger, caused by not getting enough minerals and vitamins in the diet – that is the major hunger problem the world faces today.

“The six new varieties of staple crops we are developing are more nutritious—they contain higher amounts of vitamin A, zinc, or iron,” he added.

Lack of these nutrients is what causes widespread suffering and health problems, especially for women and children.

Boy said these crops will be distributed to more than three million farming households in seven countries in Africa and Asia by 2015.

“Not bad for a programme that started from scratch to develop these crops beginning only in 2003,” he noted.

When eaten regularly, these nutritious crops could provide on average 50 percent of vitamin A, zinc, or iron requirements. According to CGIAR, more than two billion people worldwide do not get enough of these crucial nutrients in their diets.

Deficiencies can lead to lower IQ, stunting, and blindness in children; increased susceptibility to disease for both children and adults; and higher health risks to mothers – and their infants – during childbirth.

According to the World Bank, malnourished children are more likely to drop out of school and have lower incomes as adults, thus reducing overall economic growth.

In its latest annual flagship publication The State of Food and Agriculture (SOFA) released here, FAO explains that unlike food fortification, which occurs during food processing, biofortification involves enriching the micronutrient content of plants.

Questions remain about the readiness of consumers to purchase biofortified foods, especially when they look or taste different from traditional varieties. But, FAO says, early evidence suggests that consumers are willing to buy them and may even pay a premium.

In Uganda, FAO discovered consumers were willing to pay as much for the orange-fleshed varieties of sweet potato as for the white varieties, even in the absence of a promotional campaign.

Similar results were found for nutritionally-enhanced orange maize in Zambia, where consumers did not confuse it with ordinary yellow or white maize. They were also willing to pay a premium when its introduction was accompanied by nutrition information.

Asked why the project targets Asia and Africa and not Latin America, CGIAR’s Dr. Boy said, “Our focus is on subSaharan Africa and South Asia because if you look at any map of hidden hunger, these are the regions marked in red.”

Latin American countries have done a better job of improving nutrition over the past two decades, he added. There are still, however, pockets where hidden hunger is a problem.

“So we are also working in this region. In fact, I am in Guatemala now to work with stakeholders to buy in to our high-iron beans and high zinc-maize initiative there. We anticipate that we could have varieties of two to three crops that are rich in iron and zinc to LAC farmers by 2015,” Boy added.

The grant was announced at a high-level international meeting in London that brought together a range of partners to make strong political and financial commitments to improve nutrition globally.

In his opening remarks, British Prime Minister David Cameron said, “It has to be about doing things differently…For science, it’s about harnessing the power of innovation to develop better seeds, [and] more productive and nutritious crops.”