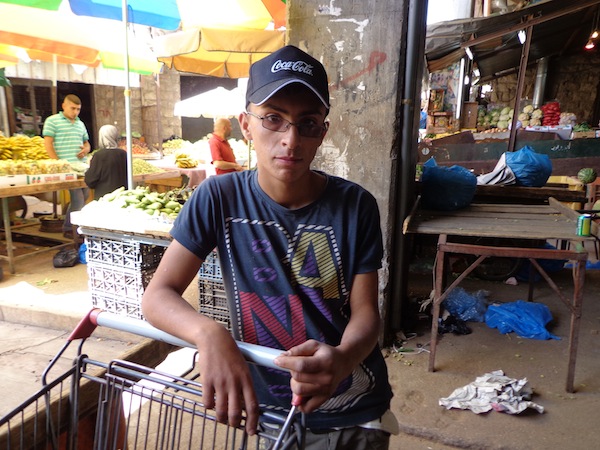 Hazem Maher, 16, from Hebron, works as a porter in a fruit and vegetable market in a city near Ramallah. Credit: Mel Frykberg/IPS

RAMALLAH, Occupied West Bank, Jun 4 2013 (IPS) - Hazem Maher, 16, from Hebron in the southern West Bank, works a backbreaking 12-hour day in the fruit and vegetable market in the city of El Bireh, next to Ramallah. He earns just over 15 dollars a day as a porter.

“My father is blind and both my parents are unemployed. I am the sole provider for my parents and my three brothers and two sisters. They depend on me to be able to eat,” Maher told IPS, adding that poor grades and his family’s financial situation forced him to drop out of school.

“I work from 6 am to 6 pm,” he described. At night, he sleeps with other boys because the drive from Hebron to Ramallah takes one and a half hours. “Transportation by service taxi is expensive,” he added.

Maher is not alone in the work he does and the life he leads. Physical and verbal abuse, exploitation, long hours, little pay, exposure to danger, a missing childhood, and a future scarred by physical and psychological damage are what some of the thousands of Palestinian child labourers in the Palestinian territories face.

“If the Israeli occupation continues and Palestinians are unable to implement a national strategy and enforce legislation protecting children in the workforce, the future of these children will be seriously compromised,” said Osama Damo, from the aid organisation Save The Children in Gaza.

“The physical and psychological damage they experience could affect their ability to be good parents and this damage could pass on to the next generation,” Damo told IPS.

‘I have no other choice’

Anis Issa, 17, is also from Hebron. He too works as a porter at the fruit and vegetable market to help support five brothers and supplement the wages of his father, who works in a photography office.

“At the end of the day I’m very tired. I hate this work but I have no other choice. I don’t even think about going to university because my family could never afford that,” Issa told IPS.

Thousands of Palestinian children are currently employed as child labourers in Gaza and the West Bank, though hundreds more are believed to be excluded from those statistics.

Six and a half percent of the children employed were aged 5-11, and less than five percent were between 12 and 14 years. These figures, however, exclude children working in family-owned businesses or on agricultural land and construction sites. Children enrolled in primary United Nations Relief and Works Agency (UNRWA) schools were not included in the statistics.

The percentage of children aged 5-14 years attending school and also engaged in child labour was 5.9 in 2010 – 7.8 percent in the West Bank and three percent in the Gaza Strip.

Palestinian children can be found working as street and kiosk vendors, car cleaners, newspaper sellers and porters. They also work in construction and agriculture and sell goods at border crossings, traffic lights and in markets, either working for themselves or for employers.

According to Palestinian law, children younger than 15 cannot legally work. From the ages of 15 to 18, they are employable with certain limitations and restrictions, according to Damo. However, “this law is not being enforced adequately, and the children are being exploited as adults,” Damo told IPS. “They are working long hours for less pay than an adult because they are more profitable.”

One reason children enter the labour market is because they drop out of school. In the Palestinian territories, the secondary school dropout rate for boys was 1.9 percent and 2.1 percent for girls.

Poverty and unemployment in Gaza have been exacerbated by a ban on exports, severe restrictions on fishermen off the Gaza coast, and Palestinians’ inability to reach their agricultural fields in the Israeli-imposed buffer zone.

The separation barrier in and around the West Bank also prevents Palestinians from working in Israel. In addition, “numerous checkpoints and barriers make transportation longer and more expensive for school children, leading many to drop out from school,” Damo elaborated.

Other factors behind the children working and often spending hours in the streets are the lack of public recreational facilities and a high population density, of which children comprise 60 percent. Meanwhile, high birth rates ensure that few Palestinian children ever experience the luxury of a room to themselves at home.

In order to tackle the problem of child labour, Save The Children has embarked on a three-year project, funded by the European Union, in partnership with a number of non-governmental organisations and the Palestinian ministries of social affairs, labour and education. “Our aim is to develop a national strategy for implementing and enforcing child labour laws and protecting children,” Damo described.