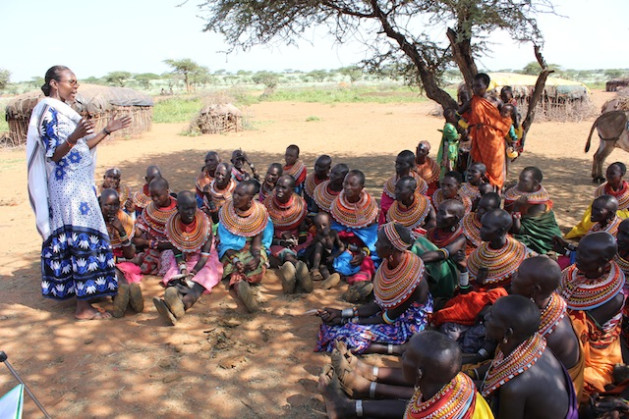 NAIROBI , Jun 11 2013 (IPS) - When she was nine years old, Jane Meriwas, a Samburu from the Kipsing Plains in Kenya’s Rift Valley region, was considered of no use by her father. After all, nine of his goats had been eaten by hyenas under her watch.

But there was a chance that she could still redeem herself by being a second, third or fourth wife to an old man and earn her father more goats than the ones the hyenas had devoured.

“I went to school by chance. Having proven to be a poor herder, my father dumped me in school to bide my time till a suitable suitor came along,” Meriwas tells IPS.

“Of course school meant sitting under a tree. This cost my father nothing; a Catholic priest took care of the expenses,” she adds.

“Among the pastoralist community, ours was an unusual family,” Meriwas says of the family she was born into. Her parents only had two children – both of them girls. “But my father never married a second wife, even when my mother died.”

The Samburu are closely related to, but distinct from, the Maasai tribe of Kenya. While the Samburu account for only 1.6 percent of the country’s entire population of 41.6 million people, they have gained notoriety for their firm grasp on a long list of harmful cultural practices performed on girls, which include crude forms of abortion.

Lolonju Lerukati, a Samburu activist who speaks out against Female Genital Mutilation (FGM) in pastoralist communities, tells IPS: “The Samburu girl child has cried for help for far too long, and in keeping with this year’s theme (of the Day of the African Child, Jun. 16) to eliminate harmful cultural practices that affect children, society must heed her cry.”

Lerukati says that it is unfortunate that in this day and age, a girl born into the Samburu community has little chance, if any, of escaping FGM, an early marriage, crude forms of abortion, and multiple births before her 18th birthday, or of acquiring an education.

At the age of 12, Meriwas did not escape FGM; after all, the Samburu’s FGM practice rate is 100 percent, according to the most recent Kenya Health and Demographic Survey (KHDS). This is despite the fact that the Prohibition of Female Genital Mutilation Act of 2010 outlaws FGM in Kenya.

But attending school saved Meriwas from an early marriage. Upon completing college, rather than seek employment, she went back to her community to create awareness against the Samburu’s harmful cultural practices, and has been speaking out against the ills meted out on girls in her community for the last 10 years.

She has a reputation as a local rights activist and has started the Samburu Women for Education and Environment Development Organisation, which pays for the education of a handful of girls rescued from early marriages and FGM.

Lerukati says that Meriwas’ strength, resilience and bravery in the face of strong resistance from the community is leading to a change of heart among some.

The rite of passage known as beading is a cultural practice performed only among the Samburu. And thanks to Meriwas’ efforts, the practice is changing.

Traditionally, a Moran or warrior buys about 10 kilos of beads, which are made into necklaces for a girl he is interested in. Upon wearing the necklaces, the girl, who is usually between nine and 15 years old, is considered “beaded” and the Moran’s girlfriend.

Meriwas speaks about the effects of beading. “Since sex between the young girl and the Moran is usually unprotected, the girl gets pregnant at some point,” she says.

But, she adds, the pregnancy will be terminated at all costs, because sex between the Moran and the girl, though permitted by culture, is considered incestuous because they are both from the same clan. So the baby is not allowed to live. 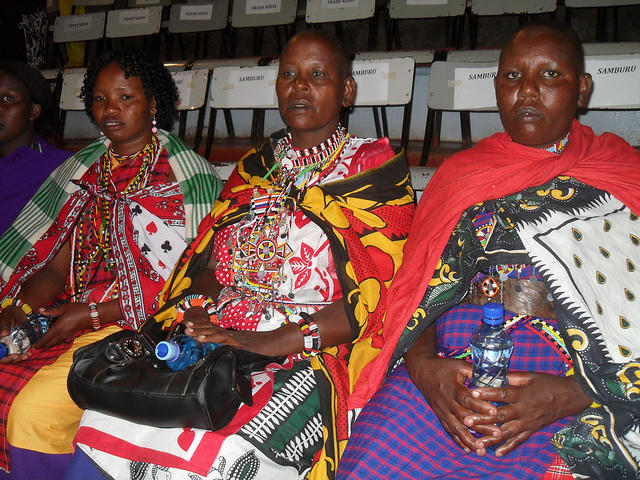 Women from the Samburu community in a meeting to address the plight of the Samburu girl child. Credit: Miriam Gathigah/IPS

There are possible dangerous outcomes when a young girl falls pregnant.

“The older women lure the girl into the forest once they suspect she is pregnant. They press her stomach until she bleeds and the foetus comes out,” says Meriwas.

If this fails, the girl, upon delivery, is forced to poison her newborn. If she refuses, then the child is to be left in the forest to be eaten by hyenas, or is given to a non–Samburu, often in the neighbouring Turkana community.

Lerukati adds: “Many deaths have resulted from this exercise. But no one in the community will speak about it.”

Due to Meriwas’ efforts, the community is opening up to the possibility of an alternative rite of passage for girls.

“Rather than have the Moran ‘beading’ the girl, women are slowly taking up the role. This means that the girl can wear her beads without being at the beck and call of a Moran,” Meriwas explains.

Lerukati adds: “The change is slow, but is happening. The practice of beading was little-known beyond the Samburu community. But Meriwas has blown the whistle at great risk to herself, and even her life.”

FGM activists such as Grace Gakii who are working in pastoralist communities say there is something to celebrate on the Day of the African Child. “There is a prominent decline of FGM among younger women aged 15 to 19 years.”

“I attribute this to a combination of factors. The push for the pastoralist girl child to attend school is definitely a contributing factor. But it is those people like Meriwas who have experienced harmful traditions who are bringing real change,” Gakii tells IPS.

“People like Meriwas understand this culture and have learnt to change it from within,” she adds.