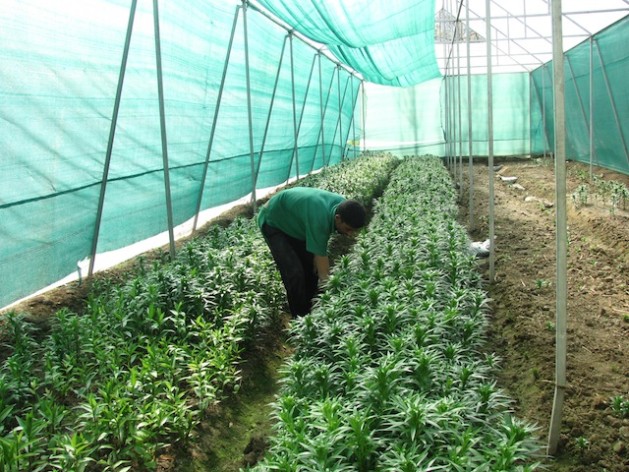 A worker bends over the rows of flowers in one of Rubeena Begum's polyhouses. Credit: Athar Parvaiz/IPS

SRINAGAR, India, Jul 9 2013 (IPS) - As a little girl, Rubeena Begum had big plans: she would become a doctor and secure a decent income working in one of the 30 hospitals in the Himalayan state of Kashmir in north India.

She had pictured sterile medical establishments and well-lit corridors that reeked of disinfectant, never dreaming that she would one day make a living in a much more organic environment.

Standing in front of a handsome collection of polythene-covered greenhouses, or polyhouses, Rubeena points proudly to the fragrant blossoms inside – Lilium, gladiolus, gerberas, carnations, lavender and Bulgarian roses – that have changed her life forever.

She does not cultivate these flowers for their aromatic and medicinal properties alone: they also fetch her a tidy sum at the local market, enough that she has been able to pay back a considerable portion of the loans she took to get this floriculture business off the ground.

Starting with just three polyhouses erected on half an acre of land in the Budgam district of Kashmir in 2006, Rubeena has doubled her business in six years, and now manages 12 growing units.

Banks that once baulked at the idea of providing a loan to this intrepid young woman – demanding countless documents as proof that she would be able to repay – now approach her with offers of even bigger loans to sustain her successful venture.

Rubeena tells IPS that she has become the veritable poster child for entrepreneurship in Kashmir, where half a million out of roughly ten million people are jobless.

Experts blame this dire situation on the armed conflict that has gnawed at every aspect of life in this scenic yet troubled state for over two decades.

Every year over 2,500 young people graduate from Kashmiri universities with Master’s degrees in hand – but those who are unable to bag the few available jobs in the government sector, or in the tourism, agriculture or handicrafts industries, end up searching desperately for work that simply does not exist.

Now, floriculture seems to be offering a way out of a cycle of poverty that many youth were beginning to fear they would never escape.

Rubeena had been on the lookout for employment opportunities when she happened to tune into a radio programme extolling the virtues of agricultural ventures, and of flower cultivation in particular.

“As a child I was always passionate about flowers – I would gather them and decorate my house with them,” she said. “I knew then that this was something I needed to take up.”

After receiving basic training from the Jammu and Kashmir Entrepreneur Development Institute (J&KEDI) on how to erect polyhouses, as well as advice from the floriculture department on the basic growing seasons and harvesting techniques, she set to work.

While reluctant to divulge details of her profits, she readily shared news of having recently expanded her operations by renting 57 acres of land for the cultivation of Bulgarian roses and lavender.

She transports many of her flowers and aromatic oils to collection centres in Kashmir, where they are picked up by distributors who drive them into major urban centres like Delhi, Mumbai and Hyderabad, where flowers for religious festivals, marriage ceremonies and temple offerings are in high demand.

She also sells extracts like rose oil (used in perfumery), rose water (used for cosmetic and medical products) and lavender oil (used in cosmetics and alternative medicines) at her shop in Srinagar’s Sheikh-ul-Alam International Airport.

The Jammu-based Indian Institute of Integrative Medicine (IIIM) also facilitates sales of her products by putting her in touch with buyers interested in the plants’ medicinal properties.

Experts tell IPS that a bunch of 10 high quality carnations or gerberas typically fetch between five and 15 dollars, while a kilogramme of rose oil brings in up to 7,000 dollars in the Indian market.

According to official estimates, Kashmir’s floriculture industry has the potential to generate 100 million dollars a year in revenue, since the blooms here are said to be of exceptionally high quality.

Whether this is due to the crisp, clean mountain air or the rich Himalayan soil does not seem to matter much to the youth who are flocking to the sector.

“I was working in a private company outside Kashmir but after realising the potential of floriculture in Kashmir, I rushed back here,” Dar told IPS at his farm where he cultivates gerberas, carnations and roses.

Dar’s Bismillah Flora Company is still in its infancy, fetching around 4,000 dollars a year, but he says he is confident that he can transform it into a major business operation.

Well educated and tech-savvy, Dar spends hours online researching the best scientific practices such as the ideal distance between rows of flowerbeds and optimal irrigation techniques; he also buys seeds from reputed companies.

According to Kashmir’s Floriculture Department, in the last year alone more than 1,100 youth started growing flowers for a living.

Popular regions for floriculture include the Budgam, Srinagar and Baramulla districts of the Kashmir Valley, a fertile basin of the river Jhelum, where the climate is ideal for nurturing the delicate flowers, according to Sunil Mistri, director of Kashmir’s Floriculture Department.

“The average farmer can earn an additional annual income of 3,000 dollars if he also grows flowers,” Mistri told IPS.

According to Javid Ahmad, a floriculture officer in Budgam, the number of flower-growing farmers reached 375 in the last year. Once registered with his department they are entitled to regular advice from experts and subsidised loans ranging from 3,300 to 16,600 dollars to encourage more people to venture into the field of floriculture.

As Javid was talking to IPS, two young men dropped into the office and expressed their desire to start a flower cultivation project using a small portion of their farmland.

Bashir Ahmad, who graduated from Kashmir University two years ago and has since tried – unsuccessfully – to secure a livelihood cultivating mushrooms, is desperate for an income.

Lured by the many success stories of floriculture entrepreneurs like Rubeena, Bashir is now “quite keen to take this up as a profession,” he told IPS.

Individual ventures have a multiplier effect on employment. For instance, Rubeena now hires 53 workers to tend to the flowers, paying day labourers about five dollars a day, and her regular employees between 70 and 100 dollars per month.

Anxious to capitalise on these developments, the government is laying plans to develop the sector on a national level. Mistri says the floriculture department will soon create cold storage facilities at various centers across Kashmir, to ensure that flowers stay fresh until buyers come for them.