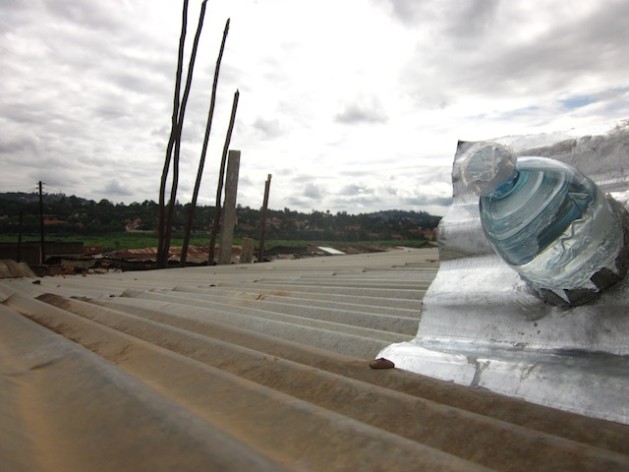 A clear plastic water bottle stuck through the ceiling of the iron roof illuminates a room. Courtesy: The Daylight Project

KAMPALA , Jul 10 2013 (IPS) - As he sits in the family lounge in Kamwokya, an informal settlement in Kampala, with the afternoon sunshine streaming through the door, Joseph Senkungu remembers a time when life, and his home, was very dark.

“I like the weather, it is always sunny. We have a lot of sunshine,” says the 19-year-old part-time songwriter and musician, and part-time mechanics student.

“But it was dark in there,” he tells IPS. He gestures towards the small bedroom behind the lounge that he shares with his grandmother Kataita, 65, and father Semakula, 46. Now, a clear plastic water bottle stuck through the ceiling of the iron roof illuminates the room.

“We did not get too much light in here,” explains Senkungu. “It was so dark, you may have stepped on a snake or something else dangerous.”

“Electricity is not affordable to us because we are poor.” -- Alison Odong, a member of the National Slum Dwellers Federation of Uganda

They have power in the living room of their house. But most of the money the family earned went towards their electricity bill, which used to cost about 19 dollars a month, until it got too expensive. But theirs is not a unique situation. According to the World Bank, only nine percent of Uganda’s 34.5 million people have access to electricity. And in 2012, the Ugandan Electricity Regulatory Authority approved an average 47 percent increase in rates.

“It wasn’t good. We used to buy torches. We used candles,” says Senkungu.

“They are too expensive these days. They are 350 shillings (15 cents) each. You may buy two in one day.”

His father is a part-time teacher who earns a mere 31 dollars a month. The family also relies on the matriarch, Senkungu’s grandmother, who sells tomatoes and onions in Kamwokya. But Senkungu says this brings in only about five dollars a month.

The family become used to fumbling around in the dark bedroom during daytime, for instance when Senkungu’s grandmother needed “balance” (change) to give a customer. They just got on with things.

That is until his grandmother heard from a neighbour about the Daylight Project, a community innovation scheme and the brainchild of Jennifer King, a Canadian living in Kampala. The project uses plastic water bottles – something that has become an environmental nuisance in Uganda – to directly improve the daily living conditions of people in informal settlements through simple solar technology.

Residents are asked to contribute the water bottles as a way to reduce waste in their area and buy in to the project.

After residents collect 1.5 litre transparent plastic bottles, Jik, a household bleach used to wash clothes, is poured into the bottles to purify the water. A hole is then cut in an iron sheet, and the bottle inserted. Silicone purchased from local hardware shops is used to keep the bulb in place.

The lights are assembled for just under one dollar, with the cost borne by the Daylight Project.

The bulbs take about 30 to 45 minutes to build, and another half hour to install. The silicone takes about six hours to dry fully. If properly made and installed, the bulbs emit up to 60 watts of light, generated from the sun, and last between five and seven years, according to the Daylight Project.

This has been proven, the project says, by the same scheme run on a much larger scale by MyShelter Foundation in the Philippines – where King got the idea from.

“What ends up happening is the plastic bottle cracks from exposure to the sun and the water then evaporates,” says King, who co-applied for funding from a United States organisation, the Congressional Hunger Center, after seeing a story on how the project was working in the Philippines.

“But we’ve have had lights in for a year-and-a-half now, and they are as sound as the day we installed them,” she tells IPS.

In the past four months the Daylight Project has constructed more than 250 lights and installed over 100. More than 500 people have benefitted from this.

These plastic bottle lights are working in six Kampala parishes – Katwe, Makindye, Kamwokya, Namuwongo, Kisenyi III and Ndeeba. And in Nagalama town, just outside Kampala, the project has lit up their first school.

The Daylight Project asks the community to select members who would benefit most from having the lights installed. In every case it has turned out to be a grandmother caring for many children.

“The reaction we get when the lights have been installed is extremely positive,” says King.

“For many, they don’t believe the bottles will produce such a bright light. I didn’t believe it until the first time I saw it either. When we complete the installations and people go inside for the first time, they are taken back by how bright it is.”

She adds: “We considered renaming the project the ‘The Banange Project’ (banange means “wow” in the local Luganda language), because that was everyone’s first reaction.”

Alison Odong, a member of the National Slum Dwellers Federation of Uganda (NSDFU), who lives in Kampala’s Kamwoyka slum, says she is delighted with the project’s work.

“Electricity is not affordable to us because we are poor,” she tells IPS.

“We are happy with these lights because they’re easy to make, you only need to have a few materials and it uses natural light.”

The Daylight Project, which receives funding from a private donor in Australia, has also trained 350 people to install their own water bottle bulbs.

“We are training it to do it themselves,” says Tom Luba, the project’s assistant manager. “Our aim is not to do for them.”

Today, daily life is a bit brighter for Senkungu and his family. “I was really so surprised seeing these plastic bottles can make lights,” he says.

“All of us are happy. It has helped with so many things. Like right now, children may be playing outside and I want to read my books, or go into the bedroom and write my songs. There is light.”