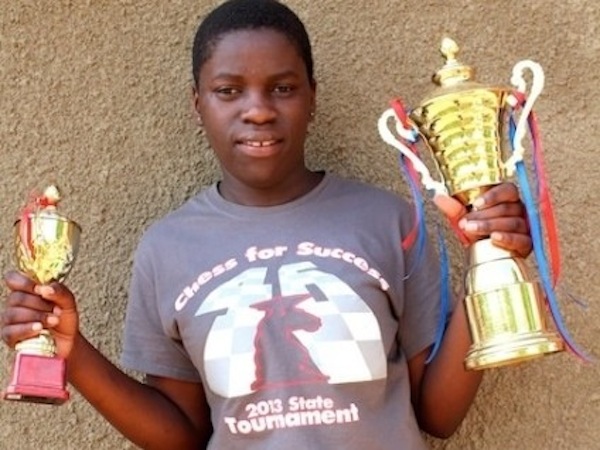 Phiona Mutesi began playing chess because she wanted the free meal the programme offered. She is now a world prodigy and was named a Woman Candidate Master, the bottom-ranking title given by the World Chess Federation. Credit: Amy Fallon/IPS

KAMPALA, May 28 2013 (IPS) - Phiona Mutesi was a muddy, desperate nine-year-old foraging for food in Uganda’s biggest slum, Katwe, when she discovered, through her older brother Brian, a chess programme.

It was not pawns, rooks, bishops, knights or a king that drew her to a church verandah in Katwe, Kampala – it was what came with the lessons: a free bowl of porridge.

“We didn’t have food. We were sleeping on the streets because we didn’t have the money to rent a house. It was a hard time,” says Mutesi, 17, whose father died of AIDS when she was three.

“The pieces looked attractive to me. I didn’t want to learn the game. That time I just wanted to get a cup of porridge.”

Mutesi was dirty and barefoot. The other children in the programme, run by Robert Katende of Sports Outreach Institute, a Christian mission, told her to leave.

“I didn’t feel bad because that’s the life in Katwe,” she tells IPS, speaking from the lounge in Katende’s house where she is currently staying. In the cabinet behind her, her trophies are piled high.

Mutesi returned again and again to the chess programme, but only for the free meal.

“That’s when I got to practice and I got better. Then I got an interest in chess,” she says.

“I was only thinking how can I manage to get something to eat. But now I've got hope of becoming a grandmaster, a doctor, even building an orphanage for slum kids." -- Phiona Mutesi

“The life I’ve been living, it also involved planning. When you’re living in a slum you also have to plan ahead: how am I going to get food tomorrow?”

Chess had been introduced in this East African nation in the early 1970s by a group of doctors working at Mulago Hospital in Kampala, according to Christopher Turyahabwe, General Secretary of the Uganda Chess Federation.

“They thought it would bring back reasoning,” Turyahabwe tells IPS. “Later on it spread through the army to help them plan strategy.”

It was largely thanks to Father Damian Grimes, a former English principal who headed the progressive Namasagali College between 1967 and 2000, that the game was introduced into schools. Grimes started a Namasagali chess club, organising tournaments with other schools.

“At first we only had two or three or four visiting schools,” Grimes tells IPS. “We could not persuade any girls to take part.

“Gradually, however, things developed and by the late 1970s and early 1980s it had gone up to something like 30 or more visiting teams including girls.”

A team consisted of four players and a school could send several teams to compete if they wanted. The competition became an annual chess festival, later named the Father Grimes Schools Tournament.

Little did Grimes know when it began that more than two decades on a girl from Katwe slum and her team would take the title five times in a row.

“Wow, I was so excited and couldn’t believe it, until we reached (our destination),” she recalls. “I thought we are near heaven.”

Since then she has competed in two chess Olympiads in Siberia and Turkey. She was also named a Woman Candidate Master, the bottom-ranking title given by FIDE, the World Chess Federation, after last year’s event in Istanbul.

She recently spoke at the Women in the World summit in New York, attended by Hillary Clinton and Oprah Winfrey.

In the United States, Mutesi also played her hero, grandmaster Garry Kasparov, one of the game’s greatest champions of the 20th century. Bill Gates has reportedly asked to play her and Disney is in the early stages of production of a movie on her life. One U.S. school has even started a tournament in her name.

“I was only thinking how can I manage to get something to eat. But now I’ve got hope of becoming a grandmaster, a doctor, even building an orphanage for slum kids.

“I never believed I’d become an inspiration to other people.”

Before Mutesi began attending St. Mbuga Vocational Secondary School in Makindye, Kampala, on a full scholarship, there were only four female players. Now there are over 50 and chess is a compulsory subject at the school.

“I was bored. I used to play more active games,” the law graduate from Mbuya, Kampala, tells IPS. “I tried soccer, I tried volleyball.

“It (chess) is fun. It’s not something that depends on my physical ability.”

Today Mutesi is the Ugandan national ladies’ captain. She has competed in two Olympiads and the World University Games.

“The common factor that we all have is chess, irrespective of the ages,” says Amoko, who is on her way to a karaoke night out in Kampala with other UCF members.

“I like the kind of association that it creates.  Phiona is 17 years old but we have a common ground. There’s a number of girls and the number’s growing.”