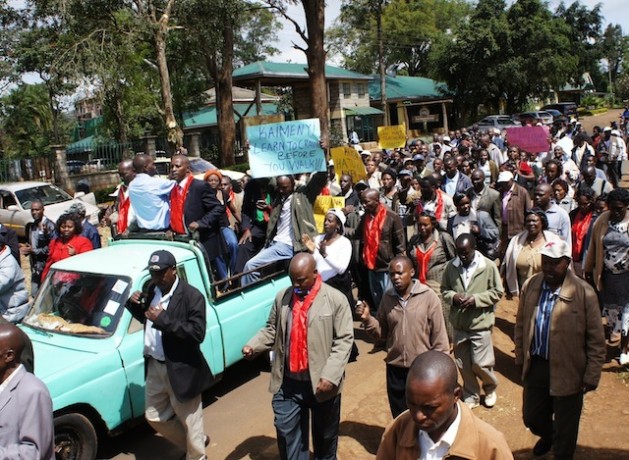 In President Uhuru Kenyatta’s first 100 days of power, from Apr. 9 to Jul. 19, there have been a series of street protests and labour strike threats in the public sector. Credit: Miriam Gathigah/IPS

NAIROBI, Jul 25 2013 (IPS) - Kenyan police are said to be investigating the rise of a group dubbed the March 4th Movement (M4M), which aims to make Kenya ungovernable by recruiting youths to take part in protests, similar to those that saw Egyptians overthrow their president. But politicians and analysts here say they do not foresee the movement capable of creating an East African Spring.

“Demonstrations are a good indicator of the degree of dissatisfaction among citizens, but there is no country in East Africa with a political consciousness that can sustain the kind of protests that we have seen in the Arab world,” Gideon Ochanda, member of parliament from the Bondo Constituency in Nyanza Province, tells IPS.

This week, activist Okiya Omtatah, who claims to have founded the movement, was summoned by police to give a statement. Previously it was believed that Eliud Owalo, an aide to former prime minister Raila Odinga, was the movement’s founder.

According to reports by local newspapers, M4M aims to exploit the discontent among Kenyans, many of whom are upset about rising food prices, to overthrow President Uhuru Kenyatta. They had allegedly planned massive nationwide protests similar to those seen this July in Egypt that led to Mohamed Morsi, Egypt’s first democratically elected president, being overthrown by the army. In 2011 mass nationwide protests by Egyptians led to the ousting of Hosni Mubarak as the country’s president.

In Kenyatta’s first 100 days of power, from Apr. 9 to Jul. 19, there have been a series of street protests and labour strike threats in the public sector, but none to the scale of what was seen in Egypt. From Jun. 25 to Jul. 17, 280,000 teachers from the Kenya National Union of Teachers went on strike. But the strike ended primarily because the government threatened to freeze their salaries.

In May, members of parliament threatened to paralyse the government by going on strike over a new salary package that would mean they earned less than their predecessors. They, however, did not follow through on the threat.

On Jul. 5, the Kenya National Union of Nurses gave notice of a 21-day strike to the government. A date for the strike has yet to be announced.

And in June activists across the country began campaigning against a new Value Added Tax (VAT) Bill, known popularly as the “Unga tax bill”. The bill seeks to apply a 16 percent value added tax rate on basic commodities that have remained untaxed until now. These include rice, bread, maize flour, processed milk and sanitary pads.

Consequently, there are those drawing parallels between the unrest here and the Arab spring.

“When a large constituent lives from hand to mouth, they cannot afford to be on the streets long enough.”

Nyamwamu says that while the middle class in the Arab world own houses and are fairly financially secure, “a large population in Kenya pays rent. Striking teachers in Kenya need their salary to pay rent, they could not sustain their labour strike long enough to get their dues.

“But, backed by a very progressive constitution, Kenya has achieved an expanded political space, and is only surpassed by South Africa and Ghana.”

His meal is often spilt as demonstrators engage police in running battles. But to put his point across, it is a loss that Omondi is willing to incur.

“A two-kg packet of maize floor should come down from two dollars to less than a dollar,” Omondi, a member of Unga Revolution, a lobby group of youths who have been regularly taking to the streets over the high cost of living and food prices, tells IPS.

Peter Kimani, who is also a member of the lobby group, tells IPS: “We will demonstrate, and even remove this government if it remains deaf to the cry of its people.”

Jennifer Massis, a politician from the Ford Kenya party in Rift Valley region, warns that the VAT bill may spark more demonstrations.

“Kenya is a man-eats-man society, we are among the most taxed citizens in Africa and our members of parliament are among the highest paid. People are disgruntled,” Massis tells IPS.

“Already, the wage bill is huge and the money is raised by taxing citizens,” she adds.

Ochanda says that the government’s recurring cost is unreasonably high, and suggests it can be reduced by at least 60 percent.

Ochanda adds that devolution of the government has led to duplication of duties and responsibilities. On Mar. 5, Kenya implemented a new devolved system of government and with the new system decisions affecting Kenya’s 47 counties are now taken at local, as opposed to national, level.

“The government should be brave enough to lay off people and hold county governments responsible to create job opportunities at the county level. A lot of money is going to salaries for people at national level who have no actual work since this work has moved to county level where there are staff doing the job,” Ochanda says.

Nyamwamu says that while Kenya is seen as the most progressive among its neighbours, “street protests are not a solution. The judiciary has been reformed, Kenyans should learn to take their battles to court.”

“It is actually the poor who demonstrate and they tend to be reactionary in their protests. The politically conscious middle class who can engineer a series of events that can rearrange power and force the leadership to be accountable to its citizenry behave as if they do not need the government to make ends meet,” he says.