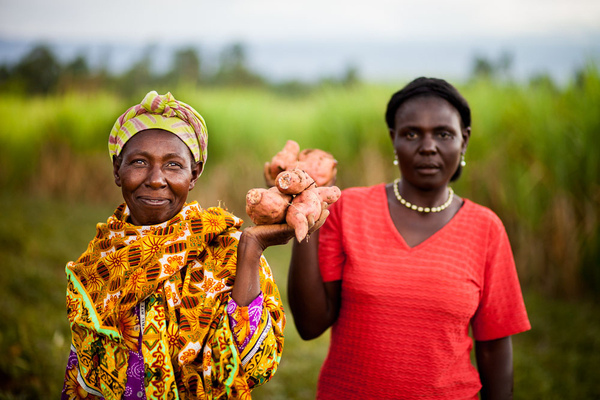 Through a Feed the Future project in Kenya, smallholder farmers, particularly women, are introduced to high-value crops such as orange flesh sweet potatoes that can both boost household food security and increase incomes. Credit: Fintrac Inc.

WASHINGTON, Jul 27 2013 (IPS) - In the face of global climate change and currency devaluation, improved strategies are being used to combat high international poverty and malnutrition rates, and to increase global food security.

“The U.S. has a proud history of providing food and services to the most in need countries,” said Shah at a Feed the Future progress report on Capitol Hill Thursday.  “It will continue to be our goal to modernise and strengthen these programmes, to create a pathway from receiving food when you are hungry to living in a food secure society.”

One of the recently announced labs, the Feed the Future Innovation Lab for Collaborative Research on Sorghum & Millet is a partnership between the organisation and Kansas State University.

The lab will attempt to find new technologies and techniques for smallholder farmers to use in order to ensure that their productivity of grasses raised for grain, including sorghum and millet, increases in times of climate change.

“The perspective from us is that we think the emphasis that has been given to agriculture is critical, not just for food security but for economic development and growth in developing countries overall,” senior policy advisor on agriculture and food security at the advocacy organisation Oxfam International, Eric Munoz, told IPS.

“We certainly have questions about USAID’s direction, but they are intended to strengthen their direction as opposed to redirect them.”

The second of the two new labs, the Feed the Future Innovation Lab for Food Security, is a partnership with a number of universities including Michigan State University and the University of Pretoria.  The lab will attempt to improve food security policies and increase private sector investments to support smallholder farmers.

“The food security policy innovation lab is intended to increase the body of knowledge and understanding of the best way to go about influencing policy and what the best ones are to accelerate the impact that we are trying to achieve,” the food policy advisor for USAID’s Food Security Bureau, David Atwood, told IPS.

Both of these labs will focus on Senegal, Niger and Ethiopia.

“If you look at the big food crises, some 17 million people were affected in 2012, including people in those three countries,” Munoz told IPS.  “They have large populations of food insecure and hungry people.  Focusing on those countries makes a lot of sense.”

Launched in 2011, Feed the Future issues annual reports analysing progress during the fiscal year.  The reports outline overall goals for 2015 and yearly targets along the way.

“The programme is still just a couple years in so we are starting to see some nice results, especially on nutrition,” Katie Lee, advocacy and policy coordinator for international development at the alliance of nongovernmental organisations InterAction, told IPS.

“More gendered data were provided in this second progress report, but the data show that work needs to be done to make sure the programme is reaching more women.”

According to the report, Feed the Future has met the majority of the goals it set for fiscal year 2012 in terms of who is receiving aid and how it is benefitting them.  Leaders at the organisation say that they put more of an emphasis on providing food aid to women.

“Women tend to invest more in family and child education and health, so investing in women can really help take the whole development effort a long way,” Atwood told IPS.

According to Feed the Future, women make up 45 percent of the agricultural labour force in developing countries, and if they were given the same access to land as men, their agricultural output could potentially reduce the number of hungry people in the world by 150 million.

In 2011, Feed the Future supported a group of 65 female farmers in Ghana for five months by training them in record keeping, planning and management.  The group was eventually able to buy new technologies to increase their rice production.

“The progress report is not just about technology, it’s an opportunity to understand where we can do better,” said Shah at the talk on Capitol Hill.  “We’ve gendered out data and learned that we have a great deal further to go to ensure that every dollar is preferentially benefitting women and girls.”

By fiscal year 2013, Feed the Future hopes to see over 15 million rural households directly benefit from U.S. government intervention, over eight million people apply for technologies or management as a result of intervention, and over 13 million children under the age of five have access to U.S.-supported nutrition programmes.

“We want to ensure that when American assistance touches the lives of the hungry, we help them immediately and help them stand on their own two feet in the future,” said Shah.

“When we lead with our values and we partner with our great academic and scientific institutions, our efforts are recognised an appreciated.”