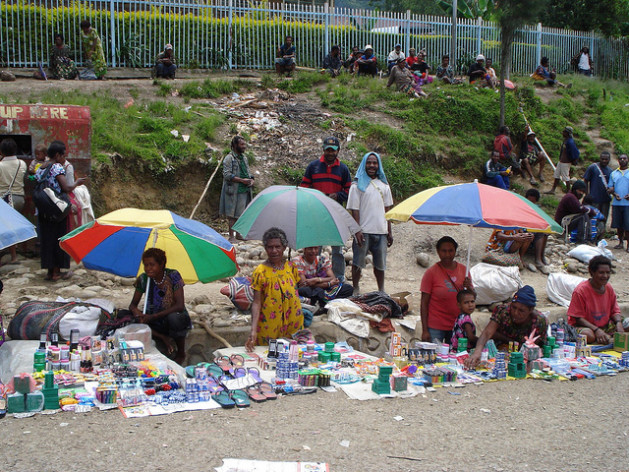 SYDNEY, Aug 19 2013 (IPS) - Governments in the Western Pacific Islands, believed to be home to a third of the world’s smokers, have begun a long battle with the growing crisis of non-communicable diseases. Such diseases currently account for 75 percent of the region’s fatalities.

Kiribati and the Marshall Islands have the highest rates of diabetes in the world at 25.7 percent and 22.2 percent respectively. Fiji carries the greatest burden of non-communicable diseases (NCD)-related deaths in the region at 501 per 100,000 in the population.

Major factors include heavy tobacco and alcohol consumption, physical inactivity, and poor nutrition. These are exacerbated by rapid urbanisation, and spreading consumerism.
In 2011 Pacific Island leaders declared NCDs to be at the centre of a health and development exigency with long-term impacts including lower economic productivity, loss of household income and unsustainable health costs.

The limited capacity of health services to cope with escalating financial and service delivery demands is of growing concern. Most national health expenditure, up to 90 percent in Vanuatu and 87 percent in Samoa, is already met by governments, and there is limited potential to increase budgets further.

“I don’t think any country can cope with the burden of NCDs, not even high-income countries,” Dr Wendy Snowdon of the Pacific Research Centre for the Prevention of Obesity and Non-communicable Diseases at the Fiji School of Medicine told IPS.

“NCDs are expensive to treat, and while countries in the region are increasing their investment in treating NCDs, the only viable solution is effective promotion [of prevention] which could reduce the burden.”

Challenging entrenched lifestyle habits and controlling access to tobacco are imperative to reducing the prevalence of hypertension, diabetes and cancer, and addressing cardiovascular disease, which is the greatest killer of all.

The World Health Organisation (WHO) cites tobacco as the second highest risk factor in NCD-related deaths, 80 percent of which occur in low- and middle-income countries.

Stephanie Erick of Tala Pasifika, a New Zealand heart service aimed at empowering Pacific peoples in tobacco control, told IPS: “Smoking practices over the years have embedded themselves in [Pacific] cultural practices, for example, with kava drinking. Socially it has become a part of gift giving [of duty free cigarette packs] from overseas travellers coming into Pacific Island countries.”

A report last year by the United States-based health foundation Legacy and the Pacific Partnership for Tobacco Free Islands (PPFTI) highlighted the very young age at which dependence starts. Twenty-five percent of high school students in the Northern Mariana Islands are smokers. In the Marshall Islands, almost 90 percent of smokers start in adolescence, and two-thirds are daily consumers by18 years.

The socio-economic repercussions for this generation as it ages will be serious in a region striving, with mixed progress, to achieve the Millennium Development Goals.

The connection between NCDs and disability, such as stroke paralysis, amputations and blindness, is already taking its toll. In Fiji, diabetes is the main cause of amputations and the second main factor in adult blindness.

A report by the University of Sydney, Australia, blames smoking for the burden of lung cancer in 39-47 percent of men in the Pacific Islands and predicts this will increase to 70-84 percent within the next two decades.

However, there are significant challenges to implementation, with many health service providers constrained by low funding and resources.

Prevention through ‘whole of society’ and ‘whole of government’ approaches is being advocated by health ministers as the most likely to reverse the present scenario.

A critical step has been ratification of the World Health Organisation (WHO) Framework Convention on Tobacco Control (FCTC) by all Pacific Island member states and territories. The framework is supported by the MPOWER strategy which promotes tobacco price and tax increases, tobacco advertising bans, regulation of tobacco use in public spaces and cessation services.

Jeanie McKenzie, NCD adviser on tobacco and alcohol at the Secretariat of the Pacific Community (SPC) in Noumea, New Caledonia, told IPS that the FCTC was an important catalyst to the emergence of tobacco policies in the region.

“SPC has been undertaking tobacco enforcement workshops in Vanuatu, Solomon Islands, Cook Islands and Palau, and these reflect the fact that there is legislation in place in these countries,” she said. “Countries in the Pacific are also increasing the tax on tobacco, with many increases at or above 20 percent.”

“Increasing the price of tobacco affects price-sensitive [social groups], usually youth and women, and acts as a disincentive,” McKenzie explained. “Laws that prevent the sale of small cigarette packs and the illegal breaking open of a pack and selling of single cigarettes also assist in dealing with the problem of young people being able to access cigarettes for a smaller financial outlay.”

WHO claims that every 10 percent increase in the retail price of tobacco induces a drop in consumption in low- and medium-income countries by up to 8 percent.

The coral atoll nation of Niue, located northeast of New Zealand, with a population of 1,611, has emerged as an early success story. Last month it announced that sustained tobacco control and health support measures had led to a massive drop in the smoking rate in men from approximately 58 percent in recent decades to 15.8 percent, and in women from 17 percent to 7.6 percent. This places the island state well ahead of its 2021 objective of less than 25 percent for men and 13 percent for women.