MONTEVIDEO, Aug 14 2013 (IPS) - Latin America and the Caribbean should play a central role in the construction of “sexual citizenship” – a concept that covers a series of population-related issues, rights and guarantees that this region helped build since the United Nations first emerged, says Brazilian expert Carmen Barroso.

Latin America has long been in the vanguard in the promotion of women’s rights, and still is today, Barroso, Western Hemisphere regional director for the International Planned Parenthood Federation, tells IPS in this interview. 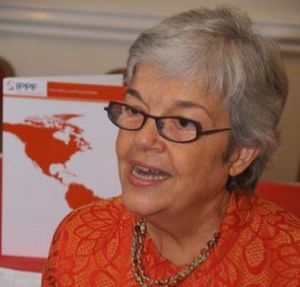 Barroso, who was a key player in the negotiations for the 1994 International Conference on Population and Development in Cairo, says all innovations and creative solutions in this area come from civil society, where youth movements particularly stand out today.

For that reason she does not believe there will be any backsliding at the first session of the Regional Conference on Population and Development in Latin America and the Caribbean, running Aug. 12-15 in Montevideo, the Uruguayan capital.

In this week’s meeting, the region is assessing its progress and failures and hammering out a common position to take to the U.N. General Assembly.

Q: Do you expect setbacks in this first regional conference?

A: No, I don’t. The region has made great strides since the 1990s. Governments are aware that this is a development issue. There is no one here who wants to move backwards.

Furthermore, there are at least 12 government delegations here that have incorporated civil society – which sends a message that governments want to feel they represent different voices in their countries.

Civil society is essential; it gave rise to the rights agenda. Governments don’t have time to create things in that terrain. When they act in a creative manner, it is due to the influence of civil society.

I also think there will be a global impact. This region has always been in the vanguard. It was an extremely central actor in promoting women’s rights in the process of the United Nations charter and in the creation (in 1946) of the Commission on the Status of Women. That was a long time ago.

Now, the region is changing; there are many middle-income countries and Brazil is part of the BRICS group (along with Russia, India, China and South Africa). That means the world looks at us differently.

Q: What issues could stand in the way of a consensus?

A: The danger I see is that references to abortion could stay the same as they are in the Cairo Programme of Action: that it’s a public health problem; that when it is permitted it must be safe; and that it is necessary to act in line with national laws.

This will be a major focus of debate. The reality in the region has changed. Uruguay decriminalised abortion, the Mexican capital did so as well, and so did Guyana and Puerto Rico. Colombia adopted more flexible rules, and Brazil expanded the circumstances in which abortion is legal. In Cuba abortion has been legal since the 1960s.

It’s important for this to be reflected in the regional position, but that won’t be easy.

Another aspect is the demand for comprehensive sex education, particularly for young people. There is still this terribly daft idea that sex education encourages “sin”, or earlier sexual initiation.

The research shows that this isn’t true, and that the start of sexual activity is even sometimes delayed, because girls and young women are empowered and feel they can say no if they aren’t really sure.

There is also talk of explicitly including the right to gender identity and respect for sexual diversity.

But sexual and reproductive rights are broader. Women also have the right to not be harassed in the street or in their workplace. Many of these aspects have been forgotten.

To sum up, we are creating what we could call “sexual citizenship” – and comprehensive sex education is essential for that.

Q: How have the civil society groups that have formed part of this process in the last two decades evolved?

A: The most important thing is to look at young people. We have numerous delegations of very active young people here who also express and organise themselves as such. When I got involved in these issues I was young, of course, but I didn’t define myself as such. What defined me was being a feminist and a woman. This is new.

Q: Now that we’re talking about young people: one problem where there have been setbacks rather than progress is teenage pregnancy.

A: It’s true. A study by ECLAC (Economic Commission for Latin America and the Caribbean) shows that, in half of the countries where statistics are available, the figures have remained the same, and in the other half, they have gone up.

There are some new developments, however: many adolescent girls who have a first child don’t have a second child (in adolescence), which is what used to happen.

Q: What explains this?

A: That they only have access to birth control methods and information once they enter the health system because of the pregnancy and birth.

Q: It would seem that adolescents today enjoy greater sexual freedom than 20 years ago, but don’t have the tools to handle it…

A: Not all of them. There are class-based differences. In the wealthiest quintile of the population, there are no teen pregnancies, which are concentrated in the poorest quintile.

A: Governments should start out by living up to their promises. In 2008, the region’s education and health ministers pledged to ensure comprehensive sex education mechanisms in schools. What we have seen so far are a few timid steps in a handful of countries.