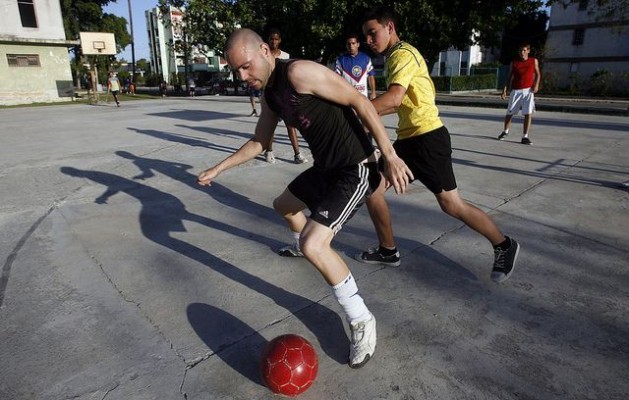 HAVANA, Sep 20 2013 (IPS) - It is unusual to see Cuban sports legends in public service announcements. However, a handful of champions and rising young stars are wearing messages or appearing in TV spots against violence among men or toward women.

“We can reach our fans with campaigns like this one,” Daniel Luis, a member of Cuba’s under-20 football team, told IPS. And such campaigns “are also helpful in professional training for young athletes like me,” he added.

Luis is one of a number of athletes who have joined the Cuban branch of the Ibero-American and African Masculinities Network (RIAM), an umbrella group that brings together more than seven million men and women in 40 countries on three continents who are trying to overcome “machista” stereotypes.

RIAM began investigating violence in sports in 2007. This year, it has attracted dozens of athletes to participate in preventive actions. In Cuba, athletes had never been involved in anything like it.

“It has to do with social immobility. It had never occurred to us to try to involve them in campaigns like this,” RIAM Cuba coordinator Julio César González Páges told IPS.

However, it is key to do so, because “nowadays, people follow athletes much more than politicians or social leaders.”

The athletes wear pro-peace messages in games in Havana, Pinar del Río (in the west) and Matanzas (east). Cuba’s youth football team – the first in history to classify for an international championship – also brought messages against domestic abuse to this year’s FIFA U-20 World Cup in Turkey, held in June and July.

These are the public expressions, which are the result of a slower task: athletes are trained in workshops and talks at sports schools in Havana and in Pinar del Río.

To spread the word, on Aug. 30 RIAM launched the UNETE Athletes Network for non-violence against women and girls. Eugenio George, who was declared the world’s best women’s volleyball coach of the 20th century, and footballers Luis Torres, Abel Martínez and Andy Baquero were the network’s founding members.

In joining, athletes promise to be ambassadors of a culture of peace and non-violence. The network is open to all countries in Latin America and the Caribbean as part of the UNiTE To End Violence Against Women campaign led by U.N. Secretary-General Ban Ki-moon.

By February, a group of about 70 Cuban athletes had been created, 30 of whom are Olympic or world champions, such as high jumper Javier Sotomayor and boxer Félix Savón. The group has produced TV spots.

“It’s great to send out these messages, but curbing this problem requires a lot of time spent on educational work and strengthening laws,” says store clerk Alejandro Roque, a football fan. “The stadiums are very violent, and even more so when key baseball games are being held,” he adds.

During the 2010-2011 National Baseball Series, about 50 athletes and 26 coaches were expelled for poor behaviour.

A homemade video that is circulating in different formats depicts a major scuffle between members of Havana’s Industriales baseball team and the Sancti Spíritus team that occurred in 2010 at the José Antonio Huelga stadium in the city of Sancti Spíritus in central Cuba.

“Our main target is men, especially young men,” said González Pagés. The strategy, therefore, is to focus on footballers, heroes of a sport that is becoming increasingly popular among young people in this baseball-crazed country.

In a survey that RIAM conducted in 2012 among 5,000 teens and young people in 18 Cuban cities, football was the favourite sport of 87 percent of the respondents.

Coach Darién Díaz told IPS: “The more that interest grows, the more the stands fill up during games. We have to do preventive work, talk to the athletes, show them audiovisual materials, and teach them how to manage situations of violence.” And the first goal is to eradicate acts of violence from the sports scene.

Perhaps because football is just now gaining ground in Cuba, this country is relatively safe from the extreme violence associated with that sport in Latin America and other regions. Brazil leads the list worldwide, with 23 football-related deaths in 2012, according to a study by the University of Salgado de Oliveira in that country.

In Latin America, hooligans are known as “barras bravas”, and the groups are often associated with the leaders of football clubs and with illegal activities, such as drug trafficking.