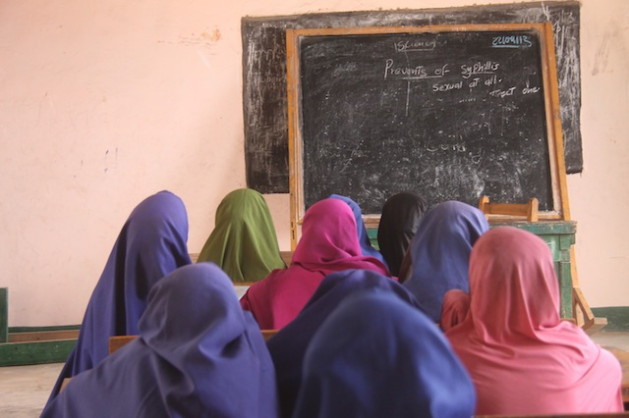 Islamic studies curriculum in Somalia’s schools is a radical form of Islam that analysts say is contributing to the growing militancy of the country’s youth. Credit: Ahmed Osman/IPS

MOGADISHU, Oct 4 2013 (IPS) - Mukhatar Jama has been teaching at a secondary school in Mogadishu for the past decade. Religious education is part and parcel of the curriculum of all schools in Somalia, but he says most parents are unaware of exactly what their children are being taught – a radical form of Islam.

“The Islamic studies curriculum you hear is the pure Wahhabism, exported from Saudi Arabia, that teaches children that all those who are not Wahhabi are non-believers, including the children’s parents, and that it is ok to kill non-Muslims,” Jama told IPS.

While there are no statistics on how many schools there are in Somalia, most here follow the Saudi curriculum, which advocates and inculcates Wahhabism. This is a far more radical interpretation of Islam than the moderate Sufi school that older generation of Somalis follows.

The radicalisation of Somalia’s youth has already started spilling over the war-torn country’s borders to its neighbours, influencing the region’s fragile security situation.

"Al-Shabaab, which means youth in Arabic, has realised the potential of Somalia’s young and are working to capitalise on it in our schools." -- analyst Omar Yusuf

It has taken root not only in Somalia and Kenya, but in the whole sub-region, Omar Yusuf, an analyst in the Somali capital, Mogadishu, told IPS.

“The event of Westgate is perhaps one of many wake-up calls for governments in the region to tackle the growing radicalisation and the logical next step of deadly militancy in the youth of the region,” Yusuf said.

The Sep. 21 attack on the Westgate Shopping Mall in Nairobi by the Somali Islamist militant group Al-Shabaab left more than 70 dead and dozens injured.

The Al-Qaeda-linked Al-Shabaab had repeatedly vowed to target Kenya after the country’s troops crossed over the border into Somalia in 2011 and ousted the radical group’s fighters from key areas in southern Somalia, including Kismayo.

Al-Shabaab advocates the establishment of an Islamic State not only in Somalia, but in East Africa. It adheres to the fundamentalist Wahhabi school of Islam. The extremist group’s ideology seems to be gaining ground in Somalia due to a number of factors.

“Think about it, schools in Somalia provide Al-Shabaab with the radical ideological teaching for the youth and when they graduate what they just need is to give [them] military training and there you have a qualified Al-Shabaab fighter,” Yusuf said.

Both teachers and parents seem divided over what is being taught at Somali schools, with some accepting it as part of the children’s religious education, and others expressing concern that their children are being indoctrinated to be Wahhabists without their consent.

“I came to know that my son gets indoctrinated with extremist views at school. He had to change schools a number of times but all schools in Mogadishu use the same Wahhabi books that we took from Saudi Arabia. The whole country will covert to Wahhabism in no time,” one parent, who sought anonymity for fear of reprisals, told IPS.

Another parent, Omar Kulmiye, disagreed that his children were being radicalised by this teaching. “I don’t [know] much about religion but I think since they are learning Islam it is ok with me and I have not sensed anything different in my children since they started school five years ago,” he told IPS.

Zakia Hussen, a researcher with the Mogadishu-based Heritage Institute for Policy Studies (HIPS), explained “there’s no one root cause but several factors that have led to Somali youth being recruited into militancy.”

Hussen said three factors have contributed to radicalisation and militancy among Somali youths. Lack of political participation, and of employment and education opportunities draws youth to militant groups, she said.

“The search for a ‘second family’ and a sense of belonging offered by militant groups…has attracted many youths,” Hussen said. “Young recruits are offered a group to belong to, a job with salary as well as marriage – things that are otherwise hard for them to obtain in Somali society.”

The unemployment rate for youth aged 14 to 29 is 67 percent — one of the highest in the world. According to the United Nations Development Programme’s “Somalia Human Development Report 2012”, 70 percent of Somalia’s 10.2 million people are under the age of 30.

The attack on the Westgate Shopping Mall comes as no surprise as Al-Shabaab has been spreading its radicalising tentacles in the region, local security expert Muhumed Abdi told IPS.

“This was a crisis that has been simmering for years because the radical groups have found not only Somalia but neighbouring countries fertile ground to grow and recruit, with governments in the region seemingly unprepared,” Abdi said.

However, the Somali government, along with the U.N. Children’s Fund (UNICEF) and international partners, is currently trying to implement an ambitious initiative to put one million children to school. Through this Go 2 School Initiative the government has also proposed changes to the curriculum in the hope that this will help fight radicalism. According to UNICEF, enrolment rates here are among the lowest in the world with only four out of every 10 children attending school.

But the government faces huge resistance from private school administrators and parents who fear the changes would make education devoid of religious moral teaching for the young.

Islamist groups have condemned the campaign as an attempt by the government to westernise Somali education and sideline religious studies.

Numerous calls by IPS to Somalia’s ministry of education remained unanswered while one official declined to comment on the allegations that schools are used as breeding grounds for militancy in Somalia.

But Hussen said the Somali government recognised that youth are the “future of Somalia” and need empowerment.

“However, the government has not been very forthcoming in the implementation of this … as youth are still very much marginalised from the political arena,” she explained.

Yusuf agreed, but said the approach needs to be far more radical and start with a critical look at the kind of education Somali children receive in school during their formative years.

“There is a need for holistic approach to youth problems in Somalia because Al-Shabaab, which means youth in Arabic, has realised the potential of Somalia’s young and are working to capitalise on it in our schools. We need to change that,” Yusuf said.