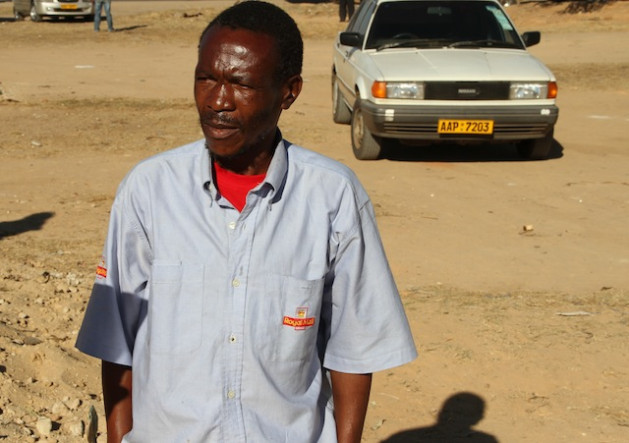 HARARE, Oct 28 2013 (IPS) - It is a common sight in Zimbabwe’s rural areas – dilapidated old cars making their way from one district to the next overloaded with chickens, maize, luggage and people.

Tazviona Matutu, 76, from Zimbabwe’s Mwenezi district in Masvingo Province, has been a passenger in these cars and he is grateful that the operators of these old and sometimes unroadworthy vehicles are willing to accept something other than cash for his fare.

“There are no buses here to ferry people from one point to another. These aged vehicles are [helping us] as we often pay our fare in hens and maize, as most of us are very poor,” Matutu told IPS.

But the use of these battered, old and noisy cars, which emit heavy exhaust fumes, has come at a high cost and is reportedly worsening air pollution in this southern African nation.

According to environmental lobby group Save the Environment Association, and independent environmentalist Gibson Mamutse, the continued use of these old cars could lead to disaster.

“[As of] August this year, pollution related to old cars used as public transport in villages has seriously worsened nationwide, which is really a disaster growing out of control,” Sifelumusa Mbihwa, director of Save the Environment Association, told IPS.

“In 2012, 23.3 percent of the country’s rural population complained of pollution resulting from old cars, while in August this year about 32. 4 percent complained [about pollution from old cars],” she explained.

In January, the Traffic Safety Council of Zimbabwe noted that 21,122 old vehicles were licenced in Zimbabwe’s rural areas and were being used as transport on rural routes traditionally shunned by legitimate public transport providers.

But Mbihwa said that the number of aged vehicles operating across the country was much higher.

“In our 2012 survey of rural car ownership in Zimbabwe … out of approximately seven million people in the countryside, three out of every 15 people own a working or dysfunctional aged vehicle through inheritance,” she said.

Zimbabwe National Traffic Police spokesperson Tigere Chigome said that most of the cars were unregistered and pointed out that it was difficult to police their use.

“We know there are unroadworthy vehicles operating in different places countrywide, but most of these aged cars are not registered nor licensed to carry passengers and really they have ultimately no paperwork legitimising their operations.

“There are no records for some of them and so to know how many they are nationwide would be difficult as they always avoid routes that are frequented by traffic cops,” Chigome told IPS.

Independent environmentalist Mamutse told IPS that the old vehicles were “worsening air pollution, threatening our environment in both cities and villages now.”

“Mwenezi’s case of [using old cars for transport] is merely an epitome of a larger problem in the country. Zimbabwe must brace to witness the worst consequences of these old cars in the countryside.

He said that according to his own ongoing research titled “Digging out the causes for Zimbabwe’s incessant droughts”, 65 to 70 percent of the total rural emissions were from veld fires, mining, agricultural and domestic activities, with emissions from old cars contributing 30 percent to this figure.

According to Clean Air Asia, an air quality network for Asia, over nine million tonnes of carbon dioxide was emitted in Zimbabwe in 2008 through industrial activity, vehicular and energy generation. Figures from the U.S. Energy Information Administration show that also during 2008 neighbouring Zambia, which has a population of 14 million, compared to Zimbabwe’s 13.7 million people, emitted 2.2 million tonnes of carbon dioxide.

But old cars are popular here. In 2010 the Zimbabwean government banned the importation of vehicles older than five years because they were polluting the environment. But a year later the government was forced to suspend the ban after pressure from second-hand car dealers who wanted to remain in business.

Though some of the cars used to provide transport in rural areas are more than 40 years old.

“The Peugeot 404 that I’m using to ferry passengers was used by my grandfather in the 1970s and I had to resuscitate it to earn a living, transporting passengers,” Artwell Muhomba, from Mwenezi district’s Maranda village, told IPS.

“[Old cars] are not only polluting the atmosphere, but they have become agents of noise pollution,” Isaac Maramba, a health inspector from Domboshava village in Mashonaland Central Province, 27 km north of Harare, told IPS.

But Arnold Nerupiri, the chairperson of the Domboshava Old Transport Association from Domboshava village, said that even though operators of old vehicles knew the environmental consequences of using them, many had no other way of earning a living.

“People operating businesses here [driving old cars] are aware of the environmental consequences of their practices. But really they want to put food on their tables as most of them are not formally employed,” Nerupiri told IPS.