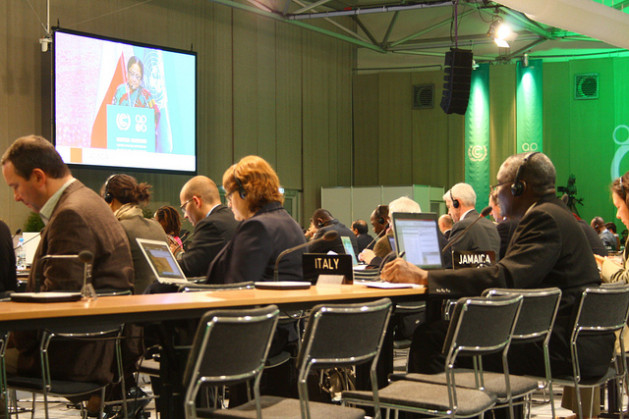 WARSAW, Nov 21 2013 (IPS) - Cleopatra is the name chosen for the younger sister of Haiyan, the cyclone that wreaked havoc in the Philippines last week. This latest storm caused massive floods and left 16 dead and hundreds displaced in Sardinia, Italy.

More than 450 mm of rain fell in just 12 hours on this Mediterranean island – half of the usual quantity that falls in a year, Environment Minister Andrea Orlando reported to the lower house of parliament Tuesday.

“I felt it was right to call the attention of this assembly [Thursday’s plenary session] to what happened in Sardinia,” the minister told IPS on his arrival to Warsaw for the Nov. 11-22 COP19 climate change summit.

“This is clearly an event which is connected to what we are discussing here, climate change and its impact on peoples’ lives and security. Yet,” he added, “it seems to me that there is still too much distance between denunciations of such phenomena and the capacity of the international community to concretely act for a common adaptation strategy.”

It is not possible to scientifically prove a direct link between climate change and the floods in Italy or the super typhoon Haiyan that claimed at least 4,000 lives in the Philippines on Nov. 7. But there is scientific evidence that extreme weather events are likely to increase in frequency and intensity as a consequence of global warming.

“Due to climate change, and more specifically global warming and the warming of the oceans, phenomena that were once happening every hundred years are now repeated every 20 to 30 years, and this last one [floods in Sardinia] perfectly fits the picture,” Luca Lombroso, an Italian meteorologist and delegate of the environmental organisation Fondazione Lombardia per l’Ambiente, told IPS.

Controversy over the efficiency of the early warning system and scarce abilities in risk management has been sparked across Italy after the tragedy. Civil Protection, however, claims that it did everything in its capacity.

While damage, and maybe victims, could have been spared through better urban planning and by measures to curb unauthorised building, “when we face such heavy rainfall, there is no way to prevent flooding, it is unavoidable,” Lombroso said.

“This is a very good illustration that no country is immune to losses and damage from climatic events from now on,” Saleemul Huq, senior fellow at the International Institute for Environment and Development (IIED) and a leading expert on loss and damage, told IPS. “All countries are going to suffer and are going to have to deal with this; the new mechanism is supposed to discuss that.”

Yet, fearing that the establishment of a third ‘loss and damage’ pillar – next to mitigation and adaptation – would turn this new mechanism into a compensation tool, developed nations are making their stand.

The “behaviour and tone” of the Australian delegation was such, according to Huq, that the lead negotiators of the G77 group of developing countries plus China decided to walk out of the negotiations at 4am on Wednesday morning.

“They felt they were blocked, they were frustrated by the attitude [of Australia], but my understanding is that they are still prepared to negotiate, if Annex I countries [industrialised nations and economies in transition] are serious about it,” Huq added.

Despite their milder approach, other industrialised actors don’t seem to be willing to create an additional loss and damage track.

“Our aim has been to move into a more constructive debate, into a debate which will allow us to make progress with our partners from the developing world,” Paul Watkinson, leading negotiator on adaptation and loss and damage for the EU, told IPS.

“We know it’s a very important project to many of them, particularly the small islands and some of the more vulnerable countries who find themselves having to deal with the effects of climate change. They are adapting but they are very worried that in the longer term they will face impacts which they won’t be able to manage.”

But, Watkinson continued, this is something that can be done through the institutions that have already been created under the climate convention and also outside the convention.

The debate keeps revolving around a different perception of what the loss and damage proposal is actually about.

One side stresses its universal scope, insisting on how recent events such as the Italian cyclone, and also the hurricanes in the U.S. or the floods in Germany, show that everyone will have to deal with extreme events and consequent losses.

Meanwhile, the bloc of developed countries fears that this will automatically lead to the creation of a compensation fund, with less universal scope.

Indeed, had a mechanism on loss and damage already been established, on what basis would a country like Italy expect developing countries to dig into their pockets?

“Let’s not reduce this mechanism to simply money from one side coming to another side,” Huq insisted. “It may be about compensation, but money is not the only transaction to be made here. This is about the expression of human solidarity across the globe, it’s about sharing knowledge. We can help the Italians from other parts of the world. We may be money-poor but we are knowledge-rich, and we can share it with [them]”.