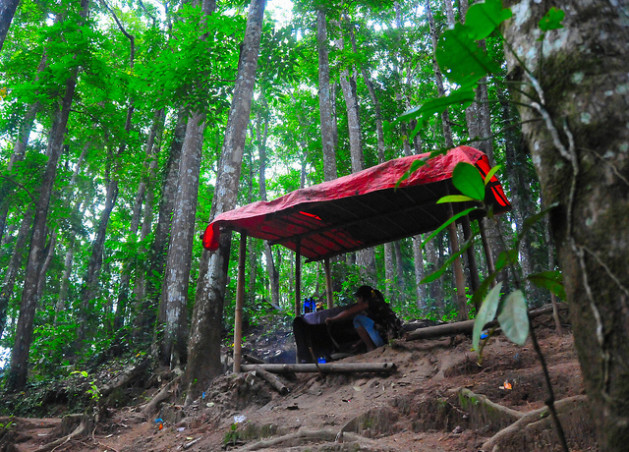 Indonesia’s Sesaot where a village committee has ably managed a forest reserve extending 3,600 hectares for over 50 years. Credit: Amantha Perera/IPS

JAKARTA, Nov 15 2013 (IPS) - Indonesia’s rainforests are facing “legal land grabs”, allege NGOs. Its ancient communities are finding that their ancestral lands are slipping into the hands of foreign companies for oil palm cultivation, as demand for the product grows in Europe, India and China.

“There are 33,000 villages in Indonesia’s forest zone, and many thousand more in areas marked for agriculture,” said Marcus Colchester, senior policy advisor at Forest Peoples Programme, an international NGO.

“The government allocates these areas to companies without even consulting the communities. So concessions have been handed out over lands where these communities have lived for hundreds or even thousands of years,” he told IPS.

Last Friday, Colchester flew to Medan to present the findings of his research, carried out in conjunction with two local organisations, on the impact oil palm cultivation has on the lives of Indonesian communities.

“It is being left to the conscience of the companies – whether they want to give a fair deal to the communities and recognise their rights or not,” Colchester said.

“What our study shows is that the communities’ rights are not being adequately recognised. The people lose access to the land they have traditionally depended on for forest produce, for hunting, fishing, medicines, agriculture and many other purposes.”

According to Sawit Watch, an Indonesian network against palm oil plantations, the country already has 3.2 million hectares of oil palm plantations, mainly located in Sumatra. Oil palm is known as “Sawit” in Indonesia.

Every year, 330,000 hectares of forest is targeted for conversion into new plantations and 650 investors – 75 percent of which are foreign companies – are applying to convert forests into oil palm plantations, it says.

Palm oil companies and the government are both involved, alleges Augustin Karlo Lumban of Sawit Watch.

“Companies first ask the communities to release their lands, saying they are taking it [to] rent. But later when these people want the land back, they are told it belongs to the state. The government, in turn, puts a business permit on the land and gives it again to companies.”

“This is land grab[ing] by legal means,” Lumban told IPS.

For a while now, the palm oil industry has been criticised by human rights and environmental organisations for its operations in Indonesia. It has also triggered a debate in the scientific and political arena.

Mark Winslow, communication consultant at the International Crops Research Institute for the Semi-Arid-Tropics, an organisation that works on sustainable ecological farming, says there are many ways of producing palm oil.

“Palm oil is generally considered the most energy-efficient biofuel and has the highest yield per unit of land area. The problem is that its cultivation is carried out in a very sensitive ecological area – Indonesia and Malaysia,” Winslow told IPS.

But there are alternatives to land grabbing, suggests Winslow.

Data from the World Resources Institute shows that there is at least six million hectares of degraded land in Indonesia. “These lands are not used at all because they are covered in dense grass called ‘alang alang’, but if you use herbicides to kill it, you could then plant oil palm there without clearing any new forest,” he said.

Also, rainforests are not the only option for oil palm plantations.

“The oil palm is a forest tree by nature, but it has potential to expand into drier areas which have a lot of rivers, or underground water, especially in Africa,” Winslow said.

Oil palm is an edible crop. Its cultivation has gone up vastly over the last decade, reaching 50 million tonnes in 2012 to become the leading vegetable oil in terms of production and trade, according to the Food and Agriculture Organisation of the United Nations (FAO). In 2011, Indonesia and Malaysia accounted for 85 percent of worldwide palm oil production.

According to the U.N. Conference on Trade and Development, 80 percent of palm oil is used for food, the rest is used in oleochemistry – for products like cosmetics and soaps, and increasingly, for biofuels.

After India and China, Europe is the third top importer of palm oil, according to FAO data for 2011.

As part of the so-called “20-20-20” climate and energy targets, the European Union aims to raise the share of its energy consumption from renewable sources to 20 percent by 2020, out of which 10 percent is for the transport sector, according to European Commission data.

While this directive has made the projection for future palm oil import higher, signs of a course reversal are coming from the European Parliament.

But no measure is in sight as far the social impact of biofuels like palm oil is concerned.

“As far as including social standards in the sustainability criteria goes, unfortunately the European Union is not moving at all,” Eickhout said.

The Roundtable on Sustainable Palm Oil (RSPO) is an organisation that represents all stakeholders throughout the industry supply chain.

“RSPO is not yet ready to show that palm oil is sustainable in climate terms,” claimed Colchester.

When it comes to the social dimension, RSPO certification should be enough to prevent human rights abuses. “It would, if they were complying,” Colchester said.

“Our report shows that even companies that are members of the RSPO and are certified still have problems in the way they deal with the communities,” he said. “And that’s what is so shocking.”