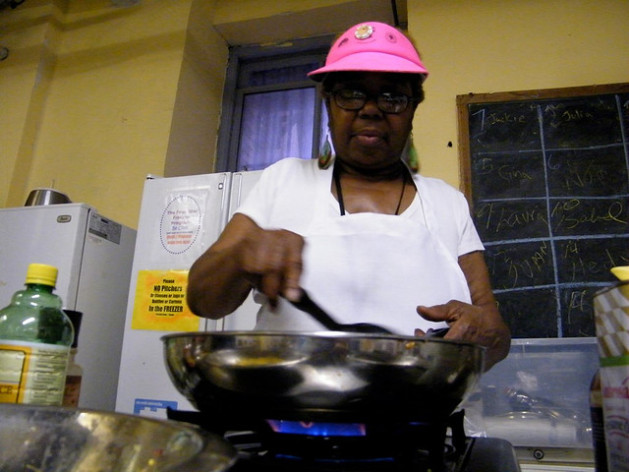 WASHINGTON, Nov 5 2013 (IPS) - Deep cuts in food aid for poor people in the United States are poised to bring higher demands on charities and food pantries across the country that provide food to families in need – and which are already overstretched.

“How are people going to feed their families?” Earle Eldridge, a volunteer at St. Anthony Catholic Church’s food pantry in Washington, told IPS on Monday. “We’re becoming a country where the government cuts such essential things as food, and we don’t know how people are going to survive.”

"They’re just worried to death that they’re not going to be able to feed their families." -- food pantry volunteer Earle Eldridge

The nearly 50 million U.S. citizens who currently rely on government food aid are set to see a substantial decrease in their assistance as part of a federal cut that came into effect on Nov. 1.

According to recent statistics, some 14 percent of U.S. households are currently dependent on food assistance, widely known as food stamps or formally as the Supplemental Nutrition Assistance Programme (SNAP).

The federal cuts come at an already difficult time for millions of people in the United States, many of whom are still struggling to recover from the recent economic crisis.

“Ever since the beginning of the recession, people have been coming to us because they’re not making the money they were supposed to be making,” Elaine Schaller, another volunteer at the church, told IPS. “But lower incomes also mean fewer donations, and that is quite problematic as we rely on donations for most of our distributions.”

Indeed, the depressed economic situation currently affecting the country exposes the larger and indirect implications of the cuts. As people have less money, they’re also less likely to make donations to distribution centres, which means food pantries are likely to be even tighter in the months to come, Schaller says.

The Nov. 1 cuts are happening as part of the 2009 American Recovery and Reinvestment Act (ARRA) – commonly known as the “stimulus package” – that aimed at boosting the national economy, including through a temporary expansion of the food stamp programme.

Since then, the ARRA has provided over 45 billion dollars in food assistance funding, or did until Friday, when several related provisions expired.

“We’ve talked about this issue with the families coming to us, and they’re just worried to death that they’re not going to be able to feed their families,” Eldridge says.

Advocates say that the situation was already critical before the Friday cuts. Slow economic growth in the aftermath of the recession, and a recent government 16-day shutdown that left thousands of families with no income, has only contributed to an increased demand on food donors.

According to U.S. Department of Agriculture statistics, in as many as 37 U.S. states, food stamp demand went up between 2012 and 2013, with states such as Illinois and Wyoming seeing the highest percentage increase. But even in those states where demand did not go up in the past year, the aggregate amount of households that rely on food stamps is still high.

At 21 percent, Mississippi has the largest proportion of its population currently depending on food stamps – nearly 630,000 people. Oregon, Tennessee and West Virginia are next, where people relying on food stamps are at around 20 percent of the total state populations.

In West Virginia, one of the states that will be most affected by the cuts, SNAP benefits went down from nearly 42 million dollars in September to a little less than 39 million, a West Virginia Department of Health and Human Resources (DHHR) spokesperson told IPS. The nearly three-million-dollar cut for November will affect almost 300,000 people in the eastern state.

States that see their SNAP funds decreased often have no alternative funding to replace the loss.

“Clients were notified of this change via mail for [the] decrease effective November. Workers were provided tools to educate recipients of this decrease in advance,” the DHHR spokesperson told IPS. However, West Virginia is not going to supplement this loss with other funds and is not currently aware of any plans to support other donor organisations such as food pantries.

Other states are likely to face similar situations.

Days before the Nov. 1 ARRA expiration, Al Franken, a Senator from Minnesota, joined 38 other lawmakers in organising a letter calling for Congress to stop the new SNAP cuts that is currently under legislative scrutiny.

“I met with farmers and farm leaders from across Minnesota who want us to ensure that we don’t hurt children, seniors, and families in Minnesota and across the country by slashing SNAP funding,” Sen. Franken said in a statement on Oct. 28.

The 39 senators write that the SNAP programme “is our nation’s first line of defense against hunger [and it] plays a critical role at a stressful time in the life of families [as it] allows struggling families to put groceries on their tables when they face financial troubles.”

The senators urge Congress to approve a bill that will not include those changes that are designed to raise new barriers to participation in the programme.

In the meantime, advocates can do little but wait.

“I really hope that bipartisanship will eventually make people in this town realise what they should do,” Earle Eldridge, the church volunteer says. “All I can do is pray.”