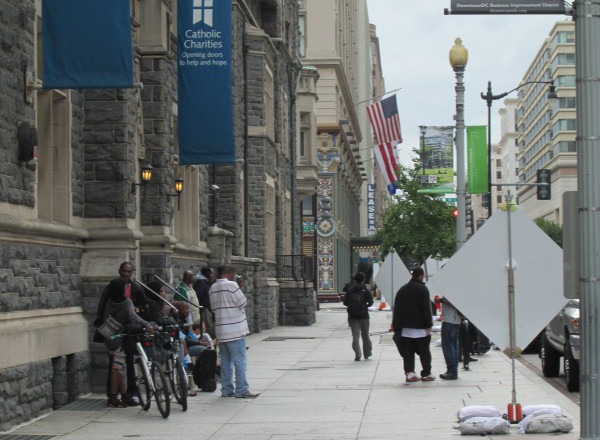 Homeless people in front of the Martin Luther King Jr. Library in Washington DC, waiting for shuttles that will take them to food shelters. Credit: Ramy Srour/IPS

WASHINGTON, Oct 17 2013 (IPS) - Near the Martin Luther King Jr. Library in downtown Washington, just a few blocks away from the federal district, dozens of homeless men and women wait for the evening shuttles that will take them to their dinners at one of many food shelters around the city.

They can get by during the day with the few dimes and quarters spared by passersby, but the only daily meal they can really count on is the one they will get at the local food shelter, and so for them, hunger is a very real problem.

Two weeks before federal legislation that will cut funding from the Supplemental Nutrition Assistance Program (SNAP), also known as food stamps, goes into effect on Nov. 1,  thousands of families around the country wonder how they will put food on the  table, while the homeless wonder about meals from shelters, because the one meal they used to count on is no longer a guarantee.

"The bill comes at a terrible time, when the needs in this country are tremendous."
-- Josh Protas

Last month, the Chairman of the House Agriculture Committee, Frank Lukas (R-OK), introduced new legislation that will cut almost 40 billion dollars from the SNAP programme, the main source of food funding for thousands of struggling families across the country.

According to a statement released by Lukas after the bill was narrowly approved in the House, the new bill “encourages and enables work participation, closes programme loopholes, and eliminates waste, fraud and abuse while saving the American taxpayer nearly 40 billion dollars.”

‘This is not right’

But while the SNAP cuts may save the U.S. government budget billions, the effects on millions of struggling Americans will be catastrophic, critics say.

“The bill comes at a terrible time, when the needs in this country are tremendous,” Josh Protas, the director of government affairs at Mazon, a Jewish advocacy group that fights hunger in the United States, told IPS. He said the cuts will have a devastating effect on people struggling economically and on food banks and shelters across the country.

“The new cuts will not be able to compensate for the high demand at food banks and shelters, which are already incredibly stretched,” he said.

Bread for the World, a Christian advocacy group, has been pushing Congress to protect the SNAP programme since the new cuts were introduced last September.

“Any kind of cut is really going to hurt families,” Christine Ashley, an analyst at Bread for the World, told IPS. “We estimate that the new cuts will take as much as 36 dollars a month from each family…Think how [many] groceries you can buy with that amount.”

Feeding America, one of the largest hunger-relief organisations in the country, noted in a recent report that up to 75 percent of SNAP households include a child or an elderly or disabled person, all of whom will be affected by the cuts.

Mr. Valentine, 52, is a U.S. Marine Corps veteran who served for eight years. He is now homeless and unemployed, and he told IPS that he relies on food stamps for all his meals. When asked about the upcoming cuts, he expressed desperation and much frustration.

“These cuts, this is not right,” he told IPS. “I don’t know what I’m going to do if they take this money away from me. I have a wife and an 11-year old daughter. We live off food stamps.” He cannot hide his exasperation as he awaits the daily 6:15 pm van that will bring him and others like him to Adam’s Place Emergency Shelter in northeast Washington for a hot meal.

Valentine also believes that a consequence of the cuts will be an increase in crime. “If people get their stamps cut off, you’re going to see more desperate people committing robberies and things like that. Crime is just going to go up.”

The SNAP cuts come at a critical juncture, as federal employees are still trying to recover from a government shutdown that left them without income for over two weeks. In fact, those federal workers with lower incomes have turned to community shelters to get food on their tables.

“With the government shutdown, we have seen a huge increase in people coming to us for food,” David O. Treadwell, executive director of Central Union Mission, Washington’s oldest social service agency, told IPS. “The SNAP cuts are only going to exacerbate this situation.”

The Central Union Mission is one of several non-profit organisations that provide food for people who do not receive food stamps. Located in the Chinatown district, the Mission runs a Food Place Centre in northeast Washington, where volunteers give away up to 125 food bags per day.

According to Jeff, the food service manager at the Mission, people who come to the Mission simply cannot make it from one paycheck to the next. “It’s already a bad situation,” he said. “It’s only going to get worse.”

As the cuts go into effect, organisations like the Central Union Mission will face considerable increase in demand as people turn to organisations that will feed them without stamps.

The SNAP cuts are part of the larger Farm Bill that was approved by a small majority in the House last month. The new bill is likely to penalise millions of unemployed Americans who cannot find work and who will be immediately removed from the SNAP programme.

“Rather than help unemployed workers who have been hit hardest by the recent economic downturn, this bill would penalise many of those who can’t find jobs by throwing them off SNAP,” Bread for the World and Mazon said in a joint statement with other hunger-relief organisations.

“We will continue to push Congress to protect the SNAP programme in any budget bill,” Bread for the World’s Ashley told IPS. “The bill passed only by a seven-vote margin. This means that there is still enough bipartisan support to keep SNAP alive.”