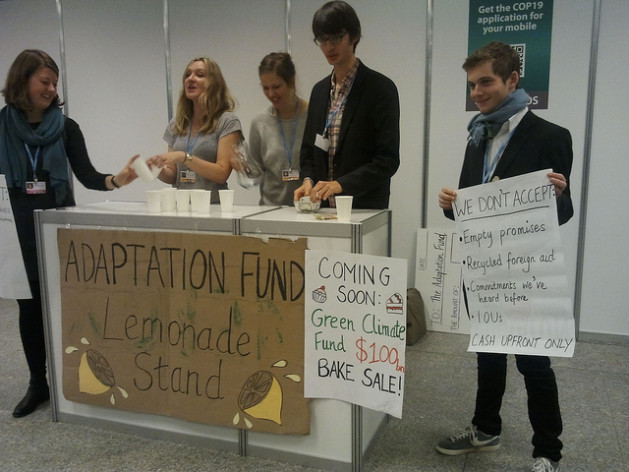 Youth activists organising a mock lemonade sale to get money for the Green Climate Fund to highlight the lack of serious commitments. Credit: Claudia Ciobanu/IPS

WARSAW, Nov 14 2013 (IPS) - The U.S. delegation negotiating at the U.N. international climate change conference in Poland is pushing an agenda of minimising the role of “Loss and Damage” in the UNFCCC framework, prioritising private finance in the Green Climate Fund, and delaying the deadline for post-2020 emission reduction commitments, according to a State Department negotiating strategy which IPS has seen.

The document, which has been leaked to a pair of journalists covering the Nov. 11-22 COP in Warsaw, outlines the U.S. strategy for the negotiations to diplomats at their various embassies as well as ‘talking points’ for them to push with their respective countries before the talks began.

The paper makes it clear that, despite President Barack Obama’s progressive stances on climate issues over the past year, the U.S. continues to pose difficulties to closing an international global climate deal by strongly resisting the concept of historical responsibility for emissions and positioning itself in opposition to developing countries on the main issues at stake.

COP19 started this year under the shadow of the Haiyan typhoon in the Philippines which put a tragic emphasis on what was anyway going to be one of the main issues to be debated here in Warsaw: the so-called “Loss and Damage” – that is, assistance for countries that are already hit by the devastating effects of climate change (what is already “beyond adaptation”).

Loss and Damage is a relatively new issue on the public agenda of COP meetings: it was in Doha at COP18 last year that negotiators decided to establish in the future a mechanism for dealing with LD.

On Nov. 12, the developing countries’ group G77+China made a public submission to the U.N. Framework Convention on Climate Change (UNFCCC) with their proposal for what an international mechanism for Loss and Damage under the UNFCCC framework could look like and how it could function. This would now constitute the basis for further negotiations here.

But according to the U.S. State Department position, any work on Loss and Damage should be done under the already existing framework for dealing with adaptation to climate change, not as a third, separate pillar (in addition to the two existing ones, mitigation and adaptation), as the G77+China submission requests.

“A third pillar,” says the U.S. position, “would lead the UNFCCC to focus increasingly on blame and liability which in turn could be counterproductive from the standpoint of public support for the conference.

“We are strongly in favour of creating an institutional arrangement on loss and damage that is under the Convention’s adaptation track, rather than creating a third stream of action that’s separate from mitigation and adaptation,” writes the leaked U.S. document.

The U.S. fears an increased “focus on liability” during the international negotiations on climate because that would de facto translate into an admission of historical responsibility by developed countries for emissions leading to climate change and a subsequent legal obligation to pay a price for this responsibility.

The issue of historical responsibility for emissions has been one of the main bones of contention, if not the main one, over successive COP meetings.

Yet for most developing countries coming to Warsaw, particularly for small island states and the least developed countries, making solid progress on Loss and Damage is a key point on their agenda.

“And if we have failed to meet the objective of the Convention [i.e., preventing anthropogenic climate change], we have to confront the issue of loss and damage,” said Philippine head of delegation Yeb Sano in his emotional introductory speech at the COP.

“Loss and damage from climate change is a reality today across the world. Developed country emissions reductions targets are dangerously low and must be raised immediately, but even if they were in line with the demand of reducing 40-50 percent below 1990 levels, we would still have locked-in climate change and would still need to address the issue of loss and damage,” he said.

“Loss and Damage has been causing very intense discussions,” said Chinese negotiator Su Wei during a briefing Nov. 14. “It will all depend on the political will of developed countries, if they are going to take action to assume responsibility for the emissions they historically produced.”

When it comes to the Green Climate Fund, meant to assist developing countries with adaptation and mitigation and on whose set-up and financing progress is expected in Warsaw, the U.S. position writes, “We’re also working to intensify our coordination in the context of the Green Climate Fund board to shape an institution that could leverage private investment more effectively than any other multilateral climate fund.”

Yet some developing countries are extremely wary of financial assistance promised by developed countries being translated into private investments as opposed to grants and aid.

“Already in the pre-COP summit organised by Poland, one and a half days out of three were dedicated to companies which were there to present to developing countries technology which they could buy to help with mitigation,” said Rene Orellana, head of the Bolivian delegation, on the first day of the COP. “Linking markets to the financial provisions [under UNFCCC] means a diluted responsibility for developed countries.”

Finally, the U.S. position might turn out to pose problems to the European Union as well, because when it comes to post-2020 emission reductions, it says, “There is divergence [among the parties negotiating] on when Parties will put forward initial commitments and the timing of the conclusion of the future agreement, with the U.S. pushing for early 2015 while the EU wants commitment on the table in September 2014.”

COP19 in Warsaw is supposed to advance negotiations both when it comes to setting up a mechanism for post-2020 emission reductions by countries across the globe and to tightening current emission targets of developed countries (2020 targets are deemed insufficient to keep the world on track for two degrees as a target maximum temperature rise).

On post-2020 emissions, a consensus is emerging that countries would present emission pledges before COP21 in Paris 2015 (when a new international climate agreement is expected to be signed) which would then be assessed for appropriateness in light of what is needed to limit global warming to two degrees Celsius.

Coming forward with emission pledges in early 2015, for which the U.S. is pushing, would mean giving less time for an international review of the appropriateness of the pledges, especially a review that could happen at the COP20 in Peru, a host that could potentially be tougher on developed countries.

Responding today to the leaking of the draft, the U.S. delegation in Warsaw told the Indian newspaper The Hindu: “The U.S. is dedicated to achieving an ambitious, effective and workable outcome in the UNFCCC and in Warsaw, and our positions are designed to further this goal. We are engaging with all countries to find solutions that will give momentum to the effort to tackle climate change.”