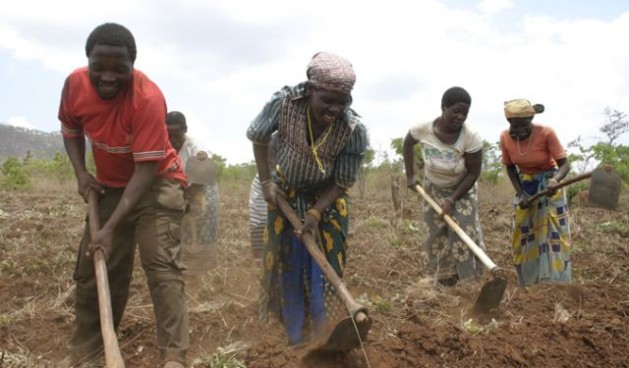 NAMPULA, Mozambique , Dec 28 2013 (IPS) - Rodolfo Razão, an elderly small farmer in Mozambique, obtained an official land usage certificate for his 10 hectares in 2010, but he has only been able to use seven. The rest was occupied by a South African company that grows soy, maize and beans on some 10,000 hectares in the northeast of the country.

He got nowhere filing a complaint with the authorities in the district of Monapo, where he lives, in the province of Nampula. And at the age of 78, he can’t wait much longer.

Brígida Mohamad, a 50-year-old widow, is worried about one of her seven children, whose land was also invaded by a company.

“My son has nowhere to grow his crops; our ‘machambas’ [farms] aren’t for sale,” she complained when she met with IPS in Nacololo, the village in Monapo where she has lived her whole life.

These are two cases that help explain the fear among small farmers regarding the Programme of Triangular Cooperation for Agricultural Development of the Tropical Savannahs of Mozambique (ProSavana), which is backed by the cooperation agencies of Brazil (ABC) and Japan (JICA).

Inspired by the technology for tropical agriculture developed in Brazil, ProSavana is aimed at increasing production in the Nacala Corridor, a 14.5-million-hectare area in central and northern Mozambique that has agricultural potential similar to the Cerrado region – Brazil’s savannah.

But in certain parts of the Corridor, it is possible to go two kilometres without seeing a house, as the families who depend on subsistence farming are spread out and isolated, on farms averaging 1.5 hectares in size.

Cassava is the basis of the local diet. The small farmers also grow maize, pumpkins, sunflowers and sweet potatoes for their own consumption, as well as cash crops: cotton, tobacco and cashew nuts.

The prospect of turning the Corridor into the country’s breadbasket, where agricultural exports are facilitated by the Nacala port on the Indian Ocean, is expected to intensify conflicts over land by attracting companies focused on large-scale, high-yield production on immense estates that displace traditional farming populations.

The arrival of these big investors is a terrible thing, Mohamad said. She is opposed not only to the changes directly brought about by ProSavana, but to others that could be accelerated due to the programme’s influence.

The coordinator of ProSavana, Calisto Bias, told IPS that peasant farmers will not lose their land. He added that the main objective of the programme is to support farmers living in the Corridor and help improve their production techniques.

But Sheila Rafi, natural resources officer with Livaningo, a Mozambican environmental organisation, said the way of life of local communities will be disrupted because the investors will bring in new employer-employee relations as local people produce crops for the companies, and monoculture will undermine the tradition of “producing a little of everything for their own diet.”

Generating jobs by means of investment and value chains is one of ProSavana’s stated missions. Another is modernising and diversifying agriculture with a view to boosting productivity and output, according to the website created by the Agriculture Ministry.

But the greatest fear, the biggest threat, is land-grabbing. Many are trying to protect their land by obtaining the “land usage right” based on customary occupancy (known as DUAT). But the certificate does not actually guarantee a thing, local farmers told IPS.

Under the laws of this southeast African nation, all land belongs to the state and cannot be sold or mortgaged. Farmers can apply to the government for a DUAT for up to 50 years.

Some 250 small farmers in Nacololo gathered Dec. 11 outside the home of the local chief to demand explanations about the alleged grabbing of nearly 600 hectares of land by Suni, a South African company.

The district of Malema, 230 km from the city of Nampula, is also experiencing turbulent times. Major agribusiness companies like Japan’s Nitori Holding Company operate in that area. Nitori was granted a concession to grow cotton on 20,000 hectares of land, and the people who live there will be resettled elsewhere.

Another of the companies is Agromoz (Agribusiness de Moçambique SA), a joint venture between Brazil, Mozambique and Portugal, which is producing soy on 10,000 hectares.

The lack of information from the government has exacerbated worries about what is going to happen. “We only heard from the media and civil society organisations that there’s a programme called ProSavana; the government hasn’t told us anything yet,” said Razão.

Costa Estevão, president of the Nampula Provincial Nucleus of Small-Scale Farmers, said “We aren’t opposed to development, but we want policies that benefit small farmers and we want them to explain to us what ProSavana is.”

The triangular agreement, which was reached in 2011 and combines Japan’s import market with Brazil’s know-how and Mozambique’s land, has already proved fertile ground for controversy.

Social organisations from the three countries have mobilised against ProSavana, rejecting it or demanding that it be reformulated.

Brazil wants “to export a model that is in conflict,” said Fátima Mello, director of international relations for the Brazilian organisation FASE and an active participant in the People’s Triangular Conference on ProSavana, held in Maputo in August.

Millions of landless peasants, a major rural exodus, fierce land disputes, deforestation and unprecedented use of pesticides and herbicides have been the result of the model that has prioritised agribusiness, monoculture for export and large corporations, say activists who defend family farming as one of the keys to food security.

An important component of that model is the Japan-Brazil Cooperation Programme for Development of the Cerrado, which got underway in 1978 in central Brazil and is now serving as an inspiration for ProSavana.

The technology that will be transferred to farmers in the Nacala Corridor comes from Brazil.

The Brazilian governmental agricultural research agency, Embrapa, is training extension workers and staff at Mozambique’s Institute for Agricultural Research (IIAM), in ProSavana’s first project, which will run from 2011 to 2016.

Brazilian participation is also decisive in the rest of the components of the programme: the master plan assessing the rural areas and crops with good potential in the Corridor, and the project for extension and models.

“The breadth and grandeur of the ProSavana Programme contrast with the failure of the law and the total absence of a deep, broad, transparent and democratic public debate,” says an open letter signed by 23 Mozambican social organisations and movements and 43 international organisations.

The letter, addressed to the leaders of Brazil, Japan and Mozambique and signed May 23 in Maputo, also called for the environmental impact assessment required by law.

The signatories demanded the immediate suspension of the programme, an official dialogue with all affected segments of society, a priority on family farming and agroecology, and a policy based on food sovereignty.

They also said that all of the resources allocated to ProSavana should be “reallocated to efforts to define and implement a National Plan for the Support of Sustainable Family Farming.”