UNITED NATIONS, Dec 18 2013 (IPS) - When Anoja Wijeyesekera, an aid worker with the U.N. children’s agency UNICEF, received her new assignment in Taliban-ruled Afghanistan back in 1997, her appointment letter arrived with a “survival manual” and chilling instructions: write your last will before leaving home. 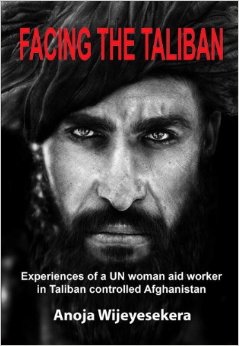 “It was an exercise that helped me to mentally prepare myself for Afghanistan,” she told IPS during a recent visit to New York to launch her just-released book titled “Facing the Taliban”.

The 331-page book details her memorable experiences in a country where “women were reduced to objects of lust.” It not only savages some of the hardcore Islamic fundamentalists but also lambastes the United States for indiscriminate bombings that killed many civilians.

A former UNICEF representative in Bhutan, the Sri Lankan national headed an all-male office in Jalalabad, located in what the U.N. calls a “hardship non-family duty station,” where she “came close to making enemies of the Taliban and getting jailed or shot by them.”

She recounts meeting Taliban mullahs who were “absolute tough nuts” and recalls stories of women covered from head to toe in a country “where animals had greater freedom than these women.”

She speaks of one minister with four wives; of a Ministry for the Promotion of Virtue and Prevention of Vice; and the tragic story of about 85,000 Afghan children under the age of five who died of dehydration resulting from diarrhoea.

After serving four years as Resident Project Officer (RPO) in an ultra-conservative patriarchal society where Taliban officials initially refused to have face-to-face meetings or even shake hands with her, Wijeyesekera says by the time she left Afghanistan in 2001, there was a dramatic change in girls’ education.

The Taliban, which subjugated women by depriving them of formal education, did not object to UNICEF’s strong support for home-schooling.

Although they could have disrupted home-schooling, she said, the Taliban did not (perhaps because they wanted an education for their own children).

Some Victories, But Much Work Ahead

Following a visit to Afghanistan last October, John Hendra, deputy executive director of U.N. Women, singled out some of the achievements over the past decade, including the Afghan constitution, which enshrines equality between men and women – on paper at least.

He said women now make up 28 percent of the National Assembly and commended the country for both signing and ratifying the Convention on the Elimination of All Forms of Discrimination Against Women known as CEDAW in 2003 (although Human Rights Watch and others note that Afghanistan has failed on many levels to honour that commitment).

Hendra also cited the enactment of a new law on the Elimination of Violence Against Women (EVAW) and the fact that 2.7 million girls are now attending school, which was not allowed under Taliban rule.

Yet "many serious gaps remain and there are concerns about regression of women's rights and opportunities in Afghanistan," he said.

In meetings with the parliament, Ministry of Women Affairs, Afghanistan Independent Human Rights Commission and other stakeholders, Hendra called for the full implementation of the EVAW law, increases in women's participation in peace processes, maximising women's participation as voters and candidates in the upcoming elections, and ensuring women's economic empowerment in rural and urban areas.

"While I have only been in this country for a short time, there are certainly serious concerns," said Hendra. "One is clearly the very high levels of violence against women and girls.

"Secondly, the series of targeted killings against senior female journalists and senior female government officials, and that is of great concern. And thirdly, to ensure that there will be much more focus on women's political and economic empowerment."

UNICEF also successfully launched a campaign to vaccinate some 4.5 million children against polio – under the watchful eyes of the Taliban.

She said the mainstream media worldwide had failed to make the clear distinction between the relatively moderate Taliban in Afghanistan and its more vicious offshoot in Pakistan (which was responsible for the 2012 shooting of the 16-year-old Pakistani schoolgirl Malala Yousafzai for promoting girls’ education).

According to the United States, the government of President Hamid Karzai – which took over after the ouster of the Taliban government following the U.S.-led invasion in 2001 – continued reinforcing the education of children.

Speaking before the General Assembly last week, U.S. Ambassador Rosemary Dicarlo told delegates there were marked improvements in livelihoods in Afghanistan over the past 12 years.

“Today, nearly eight million children are in school, more than a third of them girls. In 2001, life expectancy had been 42 years; today it is 62, and rising,” she said.

Dicarlo, who is U.S. deputy permanent representative to the United Nations, said 60 percent of Afghans were now within an hour of basic health services, and while there had been virtually no cell phones in 2001, now there are 18 million.

But Manizha Naderi, executive director of Women for Aghan Women (WAW), a New York-based advocacy organisation, said she did not see any radical improvement in the treatment of women in Afghanistan.

She told IPS that President Karzai “has been nothing if not two-faced about the situation of women in his country”.

“He made one forward move when he signed the Law on the Elimination of Violence Against Women, but he has since turned a blind eye to its non-implementation,” said Naderi, who was born in Kabul and raised in New York.

She said Karzai tried to hijack the many shelters run by non-governmental organisations (NGOs) and deliver them to the Ministry of Women’s Affairs, whose minister, probably under Karzai’s orders, immediately proposed to return all women in shelters to men who came to claim them (“a death sentence”).

He also endorsed the calamitous Ulema Councils’ recent Code of Conduct, which radically curtails the gains women have made in securing freedom of movement and makes them the official property of men, she added.

And Karzai’s Ministry of Justice recently proposed reviving the law that sentences men and women convicted of adultery to death by stoning, said Naderi.

“A huge outcry caused the ministry to back away from this sadistic plan, but the intention tells us that Taliban-style tactics are just around the corner,” she warned.

After the Sept. 11, 2001 attacks on the United States, the administration of President George W. Bush not only invaded Afghanistan but also continued a barrage of air attacks in its desperate hunt for Osama bin Laden, described as the brains behind the terrorist bombings.

UNICEF’s Wijeyesekera told IPS: “By simply bombing people out of existence, I don’t think you can solve any problem.

“What was needed was a long-term approach. You kill a hundred, another hundred will join the Taliban,” she added.

She was told by Afghan staff that several U.S. drone attacks were directed at wedding convoys because of the customary celebratory firings in the air (which was probably mistaken for enemy fire).

The New York Times said last month the United States had spent over 43 billion dollars in weaponry and military training of Afghan forces since 2001.

But Wijeyesekera said she saw no evidence of any expenditure on reconstruction, rehabilitation, recovery and development during her four-year stay in Afghanistan. She also said there was no attempt to cultivate some of the more liberal elements in the Taliban who were more receptive to the outside world.

“The Taliban was [mistakenly] perceived as a homogeneous organisation, but it was not,” she added.

When the centuries-old Bambiyan Buddha statues were destroyed back in March 2001, one of the Taliban officials, who knew she was a Buddhist, apologised to her.

She was also critical of some of the sanctions imposed by the Security Council because it undermined the humanitarian mandate of U.N. agencies.

As she flew out of Kabul in 2001, she wrote, “I thought of my four years in Afghanistan, a country I came to love and a people I had grown to respect and admire, a people whose future was hanging on the cusp of uncertainty. My heart went out for them. I felt so guilty to leave them behind.”