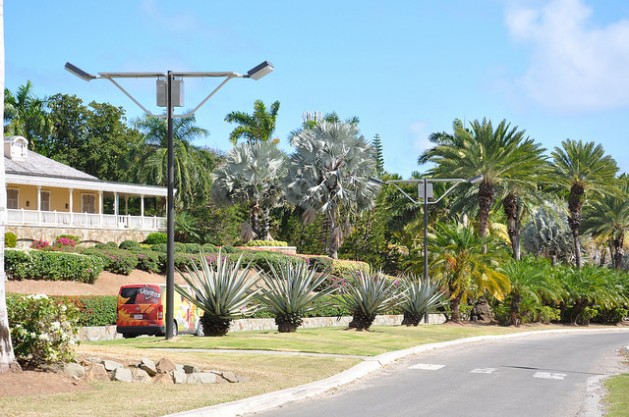 Solar-powered lights have been installed along the road to the VC Bird International Airport in Antigua. Credit: Desmond Brown/IPS

BRIDGETOWN, Barbados, Jan 28 2014 (IPS) - Despite having an abundance of wind and sunshine, Caribbean countries have found that going green is requiring significant shifts in policy, and most importantly, significant financing.

But despite these challenges, they are not daunted. Barbados, for instance, which spends an estimated 400 million dollars annually on fossil fuel imports, has announced plans for a wind, gas and solar energy programme that requires almost one billion dollars in investments.

“The cost of renewables has fallen significantly and [they] are now for the most part cost competitive with traditional sources of energy." -- Selwin Hart

“The bank is in the process of developing an energy sector strategy and policy which will be finalised in 2014,” he told IPS.

“[But] we are not waiting until that policy is finalised for us to make the necessary interventions within borrowing member countries giving the priority and urgency attached to making these investments,” Hart noted.

“We will be supporting the policy and regulatory reforms that are necessary to ensure the deployment of renewable energy and energy efficiency technology.”

Citing the region’s “vulnerability to the negative effects of climate change”, Hart said the Caribbean must be in a position to secure some of the financing needed to help it cope, adapt and reduce vulnerabilities to the serious fall-out from the phenomenon.

“We are extremely vulnerable when it comes to the consequences of climate change and we must do everything to receive our fair share of the resources being made available,” he said.

Hart told IPS global investments in renewable energy and energy efficiency have quadrupled over the last decade and now stand at 244 billion dollars a year.

“The cost of renewables, and using solar, as an example, have fallen significantly and are now for the most part cost competitive with traditional sources of energy,” he said.

The International Energy Agency (IEA) in its World Energy Outlook 2013 conservatively estimated that by 2035, renewables will surpass coal as the main fuel for power generation.

In 2012, another Caribbean country, Belize, which currently generates 63 percent of its electricity from renewable energy sources, announced plans for a National Energy Policy and a Sustainable Energy Strategy.

“We have ambitious targets. We have set ourselves to change from fossil fuel to renewable energy and at the same time decrease our energy intensity,” Energy Minister Joy Grant told IPS.

“We are pursuing all types of renewable energy – hydro, bio energy, solar, ocean, thermal and wind and waste-to-energy,” Grant added.

But like all other small developing countries, Grant said Belize’s efforts in renewable energy were constrained by the high cost of renewable technologies; the lack of domestic capacity; inappropriate frameworks to incentivise the private sector to invest in renewable energy; and small population size.

“From our standpoint in Dominica, we believe as a government and as a people that we must do something, once and for all,” he said.

Blackmore said Dominica was now moving into geothermal production with the hope of cutting the price of electricity to the consumer by 40 percent in the first instance when a 15MW power plant now being constructed is rolled out.

“Our ultimate goal of geothermal production we will also be contributing to the global effort to combat climate change,” he said.

The programme manager for Energy at the Guyana-based Caribbean Community (CARICOM) Secretariat, Joseph Williams, agreed that the cost of energy is just too prohibitive to achieve the economic growth and poverty reduction needed in the region.

“When one looks at the problems currently faced by the Caribbean it is important to note that the cost of electricity is two to three times that of other countries in the Latin American and Caribbean region,” Williams said, adding that this “represents a tremendous drag, not only on the ordinary household but on businesses and commercial activity within our region.”

Opposition legislator Gaston Browne told IPS Antigua and Barbuda presently has the highest cost of electricity in the Organisation of Eastern Caribbean States (OECS), exclusive of taxes, even though it uses cheaper heavy fuel.

“We also have the worst ratio of fossil fuel generation versus renewables in the OECS,” he said.

He told IPS his Antigua Labour Party would modernise the Antigua Public Utilities Authority “into a more efficient entity, thereby reducing the burden that unreasonably high cost of energy imposes on industry, commerce and residential consumers” when compared to Antigua’s OECS neighbours.

In August 2013, Antigua began the installation of solar-powered lights in the east of the island.

A government statement said the lights were intended to serve as a practical demonstration of the use of the nation’s renewable energy resources.

The CARICOM Energy Programme was established in April 2008 within the Directorate of Trade and Economic Integration to provide greater focus on energy matters in CARICOM towards development of the energy sector in the region.

Williams said the Caribbean is on the right track, putting in place a CARICOM Energy Policy and establishing targets for renewable energy in the electricity sector, while a number of the countries have advanced the whole question of policy at the national level.

“It has taken some time but we are making progress,” he told IPS.