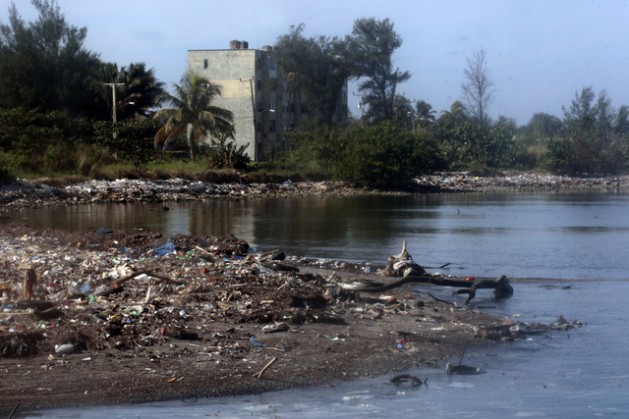 The Quibú river, running through the El Náutico neighbourhood in Havana, is full of garbage. Credit: Jorge Luis Baños/IPS

HAVANA, Jan 10 2014 (IPS) - The stench hits as you walk through the door of one of the pleasant houses along the Quibú river in the Cuban capital’s Náutico neighbourhood. “The garbage piles up, it stinks, and there are even rats,” said María Angélica Suárez, a local resident who is tired of living this way.

“The situation at the mouth of the river has always been bad…and things are worse now,” the 69-year-old pensioner told IPS. She and her neighbours suffer the effects of the urban waste that pollutes the Quibú river because of weak inspection and oversight and lax enforcement of environmental laws, among other causes.

“The trash, which washes down from upstream, accumulates and creates huge islands. It also piles up on the empty lot across the river. It makes you want to weep to see a place with such a beautiful view turned into a garbage dump,” said Suárez, one of the 1,200 people who live in this coastal neighbourhood on the west side of Havana.

She lives right where the river flows into the sea, after emerging 12 km back, from the confluence of the Auditor and Quiebra Hacha streams. Before reaching Náutico, it runs through poor neighbourhoods on the outskirts of Havana, a city that is home to 2.1 million of this Caribbean island nation’s 11.2 million people.

As it winds along the western fringes of the city, streams flow into it, but so does waste from semi-rural and urban slums.

Several Náutico homes and the Eliseo Reyes primary school, with a student body of 280, are located near Suárez’s house along the mouth of the river.

The dumping of sewage and solid waste was mentioned as one of the main causes of pollution of the Quibú basin, by the project “Environmental Sustainability in the City Province of Havana”, published in 2008 by a group of European and Latin American universities.

Other sources of contamination of the shallow river are linked, in different ways, to the activities of the Manuel Martínez Prieto sugar mill, biopharmaceutical companies, health clinics and hospitals, and agriculture, even though there are oxidation ponds and a liquid waste treatment plant in the basin to treat wastewater.

Raquel Duarte, another Náutico resident, told IPS that “the problem gets really bad when it’s been a while since it rained. The river dries up and doesn’t carry to the sea” the huge quantities of bottles, plastic bags, tires, other garbage, and sediment.

And the situation is aggravated by climate change, which has intensified the droughts, among other changes.

“What the institutions have done is sometimes cut the scrub and thickets across the river and clean up with bulldozers. But it keeps happening…and will continue to do so as long as they keep dumping so much stuff in the river,” said Duarte, a 57-year-old accounts assistant.

“I’ve had rats here, even though I keep everything clean. They come from over there,” she said, pointing to the empty lot.

Another local resident, who preferred not to be identified, said “This waste has names and faces. What’s wrong with people who dump waste? Don’t the police and inspectors fine or punish them?”

When asked about irregularities observed in environmental inspection and oversight, Ángel Alfonso, director of the governmental Environment Unit of the western province of Matanzas, told IPS that “the state inspection mechanisms do not all work together in a coordinated way against environmental violations.”

“More staff and funds are needed,” the official said. He pointed out that his unit, in charge of overseeing environmental protection in the western province of Matanzas, only has three specialised inspectors.

His team is currently training other inspectors, to apply articles of Decree Law 200, in force since 1997.

The law provides for fines of between eight and 90 dollars for those who “dump waste of any kind into the coastal area,” and up to 200 dollars in cases of hazardous waste.

But “people should feel the weight of the law more heavily,” said Alfonso, who called for “expanding the range of violations.”

For their part, legal experts Alcides F. Antúnez and Rafael Batista called for “moving from fines to the threat of prison, due to the steady increase in environmental violations” in Cuba, as they wrote in an article published by the Argentine magazine Pensamiento Penal in February 2013.

According to Antúnez and Batista, professors at the University of Granma, 730 km from the Cuban capital, the penal code should include a chapter or section dedicated to “ecological crimes,” in order to protect the environment as a “legal asset.”

They said that would be one more tool to encourage prevention, the most effective means of protecting the environment.

In October 2013, the local parliament began to modify the 1987 penal code and the 1977 law on penal procedure, with the aim of making prevention and law enforcement measures more effective.

Meanwhile, the people of Náutico have revealed another little-known cause of the situation at the mouth of the Quibú river.

On May 23, 2006, the river’s dirty water rose and covered nearly the entire neighbourhood – an unprecedented event according to Duarte, who has lived in Náutico since 1978.

To prevent further flooding, the riverbed was widened, with financing from the provincial office on water resources.

Duarte said she has observed that “now the river is not as deep, and the garbage piles up much more, although there have been no more floods.”

Suárez said “they didn’t dredge enough when they widened the river, which made the garbage problem worse.”

Knocking on doors, Suárez gathered the signatures of 42 local residents in 2007 on a letter that described the deplorable situation of the river and its delta, with photos to back it up. She delivered the petition to the government and the local environmental authorities.

“This was the only response we received,” she said, holding out a letter dated Jul. 17, 2007 and signed by engineer Tomás Rivera of the government Centre for Environmental Inspection and Control.

According to the letter, the Centre talked with the officials in charge of widening the river, in search of an answer.

“The plan is to complete the project in the second half of 2007; with this objective the sediment and waste accumulated at the mouth of the river would be removed,” says the letter signed by Rivera, in which the provincial office on water resources promises, among other things, to dredge the river annually.

But people in the community say the project was left incomplete, and that the river was only dredged once. “We need less garbage to be dumped and we need systematic clean-up actions,” Suárez said.

“Volunteer clean-up efforts are pretty much symbolic,” she said, referring to the campaigns organised several times a year by the Acualina environmental education project, which was founded in Náutico.

The citizen clean-ups bring together children and adolescents as well as adults to contribute their grain of sand, picking up trash in Quibú.