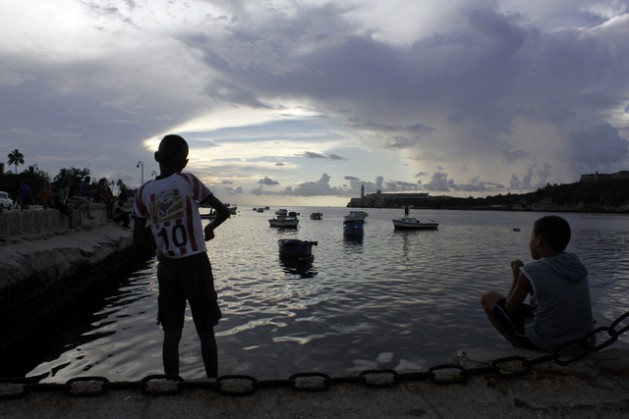 HAVANA, Jun 5 2013 (IPS) - On a piece of paper, Jennifer Rivas draws a beach, with little girls carrying bags of trash and signs that say “Let’s take care of the environment.” The 10-year-old is part of an educational programme, Friends of the Bay, that involves 322 schools in the Cuban capital.

The initiative, created in 2005 by the State Working Group for the Clean-Up, Conservation and Development of Havana Bay (GTE-BH), brings together thousands of students from different grades in environmental “circles of interest,” where they learn to take care of the bay.

Nationwide, Havana Bay is the bay that requires the most investment annually for environmental clean-up.

In 2011, the national statistics office reported that nearly 68 percent of financing for cleaning up harbours and bays of national interest went to Havana Bay, which in the 1980s was included on a United Nations list of the most heavily polluted bays in the world.

Between 1998, when it was founded, and 2012, the GTE-BH reduced pollution levels in Havana Bay by 58 percent, according to sources with the Science, Technology and Environment Ministry. In 1998, the bay’s dissolved oxygen levels were down to zero, making marine life impossible.

In parallel with clean-up work and the reduction of sources of pollution, the GTE-BH also set out to raise environmental awareness among the new generations in the 10 Havana municipalities that surround the bay and its 85-kilometre basin.

“They are the future businesspeople, workers and technicians. If they receive environmental education from an early age, then when they are men and women, many will act responsibly with respect to the environment,” Socarrás said.

Volunteers are teaching children and adolescents about protecting the environment and maintaining the clean-up work achieved by the group — which is also responsible for monitoring the bay’s waters and industrial waste, environmental legislation, and reforestation in the area.

At schools located in the basin’s surroundings, younger students work with scale models, drawings, plays and poetry, while older students get involved in research projects, visit sites that are sources of pollution, and clean up affected areas.

Yusneibi Guibert, a primary school teacher in the Havana municipality of Regla and a member of Friends of the Bay, took her students to observe the coastal health of their community, which is on the bay’s shoreline.

“There was a small dump site, and we cleaned up cans and other rubble. We didn’t continue because we didn’t have more resources. We also went to the Ñico López oil refinery (near the bay) to see how they prevent air and water pollution,” she told IPS.

According to the GTE-BH, due to the activities of this refinery and the transport of fuel through the port of Havana, an environmental accident occurs at least once annually, involving oil spills in the bay, which is pocket-shaped and has a narrow entry.

In addition, 106 sources of pollution dump waste into the bay, which is 5.2 square kilometres and has an average depth of nine metres. Along with its seawall and seaside avenue, the Malecón, the bay is the centre of life in the capital, home to 2.2 million of the country’s 11.2 million people.

On June 5, World Environment Day, the Science, Technology and Environment Ministry informed the local media that 57.6 percent of national entities with dangerous waste and unused, expired chemical products were implementing management plans at the close of 2012.

In Diez de Octubre, Havana’s most densely-populated area, specialist Álvaro J. Pérez is working with more than 100 schools associated with the environmental education programme. “Doing projects with boys and girls multiplies actions. They learn and involve their families and the community,” he told IPS.

Children have been identified as a group with a large capacity for environmental activism in Cuba.

“Children and the elderly have an incredible potential,” Alba Camejo, coordinator of the environmental communication project Árbol de Vida (Tree of Life), told IPS. “Many things are being done through initiatives that come spontaneously from the community, aside from what is done through institutions,” she said.

Sian Pérez, 11, learned in his environmental circle of interest that the bay’s waters need to be protected. “That way, fish and human beings are not affected,” said the student from the Leonardo Valdés school in Regla.

“I used to know a little about it, but now I know more about how to take care of it (the bay) and not throw garbage into the ocean. I also learned that we should tell other people not to pollute, so that the pelicans will always be in our bay,” he told IPS.

“That’s how I would always like to see the bay — clean and pretty,” said Jennifer Rivas, as she looked at her finished drawing.

The science club at Raúl Cepero Bonilla secondary school took a trip to the Luyanó River, which empties into the bay and carries almost 90 percent of waste that comes from tributaries.

Thanks to their trip, the club promoted the construction of septic tanks among hog breeders located on the riverbanks, to prevent the dumping of manure into the water.

In the town of Guanabacoa, schools that are not located within the bay’s basin also joined the project, according to Rosa Tuñón, a school health advisor who oversees environmental work in education.

“The knowledge and understanding that we share are useful for all environments,” she told IPS. “We have seen progress among students in terms of their environmental knowledge thanks to the programme. Clean-up work is done, and students and parents are encouraged to participate in festivals and contests about ecology,” she explained.

Different projects have been carried out in Havana Bay with international financing, from sources such as the Global Environment Facility and Japan’s International Cooperation Agency.