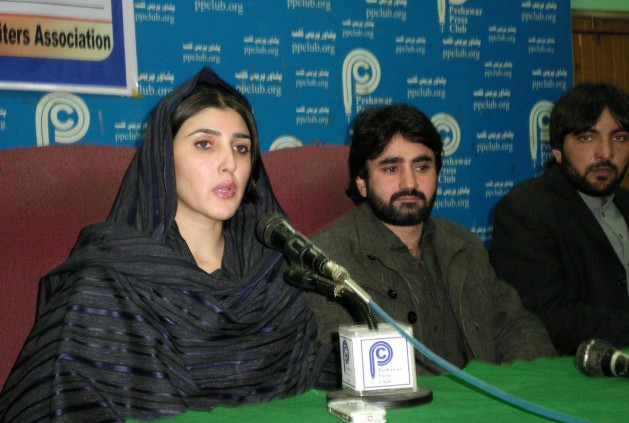 Ayesha Gullalai (left) from the Pakistan Tehreek Insaf is campaigning for an end to military operations. Credit: Ashfaq Yusufzai/IPS.

PESHAWAR, Pakistan, Feb 17 2014 (IPS) - Disturbed by civilian casualties and moved by the plight of people living like refugees in their own country, students from Pakistan’s Federally Administered Tribal Areas (FATA) are demanding an end to army operations against militants on their native soil.

“We are sick of military action in FATA as it has not eliminated the Taliban but killed, injured and displaced innocent people,” Khan Bahadar, president of the FATA Students Federation (FSF), tells IPS.

“The tribal population has been facing a hard time since the Pakistan army took control of FATA in 2004. The army, primarily sent to fight Taliban militants, has caused a mass exodus from the conflict area. The insurgents stay unharmed.”

"Of late, the youth have become a voice for FATA people.” -- Ayesha Gullalai, a member of the National Assembly

The Taliban took refuge in FATA near the 2,400-km porous border between Pakistan and Afghanistan after their government in Kabul was toppled by U.S.-led forces in 2001. As a frontline state in the U.S.-led war on terror, Pakistan began military action against the Taliban in FATA in 2004, triggering mass displacement.

“About 2.1 million people from FATA are now living in the nearby Khyber Pakhtunkhwa province. They are in deep distress as they have had to give up their jobs, businesses and farming activity,” says Bahadar, 19, a student at the University of Peshawar.

Many students from FATA were studying in Khyber Pakhtunkhwa.

FSF was formed last year to build pressure on the government to end military operations in all seven agencies of FATA and facilitate an early return of displaced people to their homes.

Bahadar says the campaign by students from FATA is gathering momentum.

FSF vice-president Burhanuddin Chamkani says, “We have been holding demonstrations in Peshawar and Islamabad to spotlight the problems of our people. Military operations are no solution to prolonged terrorism.”

Chamkani is from the North Waziristan Agency in FATA. He too says civilians have been killed or maimed in military action but the militants remain unscathed.

“At least five people, including women and children, were killed in an army air strike in North Waziristan Jan. 21 in retaliation for a suicide attack on an army convoy that had killed 22 soldiers a day before,” he says.

Another organisation, the Waziristan Students Federation (WSF), is planning to step up its campaign.

Muhammad Irfan Wazir, an office-bearer of the WSF, says around 20,000 youths from FATA are studying in Peshawar, the capital of Khyber Pakhtunkhwa province. Most have not been able to visit their families due to terrorism, he says.

“One has to pass through several army checkpoints before reaching their homes in FATA. They are homesick.”

WSF has planned protests, walks and seminars to sensitise the public, army and government.

“We are demonstrating at the University of Peshawar on weekends,” Wazir says. “We are also holding charity events and musical shows to raise money for displaced people living in camps in Peshawar and other areas.”

The responsibility to stop military operations lies with the federal government which directly controls FATA, he says.

“We have staged at least one dozen demonstrations near the Governor’s House to halt military action, but to no avail.”

Muhammad Javid, a teacher at Gomal University in Khyber Pakhtunkhwa says the continuing military offensive has angered students, who are actively campaigning against it.

“Students are justified in demanding an end to army action as it has not brought peace to these areas,” he tells IPS.

They are campaigning to ask the government to start talks with the Taliban.

The Pakistan Tehreek Insaf (PTI) party, which is in power in Khyber Pakhtunkhwa, also believes that dialogue with militants can end the suffering of people in FATA.

“We have been a staunch supporter of peace talks with militants,” PTI’s Ayesha Gullalai, a member of the National Assembly, tells IPS.

She says the federal government is oblivious to the woes of people in her native Waziristan.

“It’s the government’s responsibility to evacuate the civilian population before any action. It is in contravention of the United Nations charter of human rights to kill and injure non-combatants,” she tells IPS. The military doesn’t target civilians deliberately but there are incidents of civilian casualties, she says.

“The campaign by tribal students is welcome. Of late, the youth have become a voice for FATA people.”

Sagheerullah Khan, 20, who lives in a local hostel in Peshawar, is a native of Waziristan. “Unnecessary military operations in FATA coupled with U.S. drone attacks in which mostly innocent people are killed have caused the local population to turn against the government,” he says. This only produces more militants, he says.

“The indiscriminate army shelling poses a constant threat to people.”

Youths from FATA who are studying in Peshawar say they have been raising the issue of civilian deaths with their representatives in the National Assembly and Senate.

The fight to end army operations on their native soil, they say, will go on.