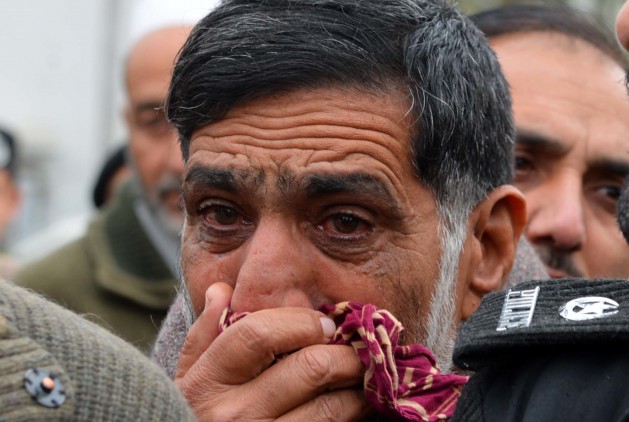 A policeman at a funeral for victims of a Taliban attack. Credit: Ashfaq Yusufzai/IPS.

PESHAWAR, Pakistan, Feb 4 2014 (IPS) - Whether to make war or peace with the Taliban has become a dilemma for the Pakistani government.

Preliminary talks were scheduled to begin Tuesday between a team nominated by Prime Minister Nawaz Sharif comprising officials and journalists, and a team supporting the Taliban, comprising mostly religious leaders. But not everyone believes these are the talks that were needed.

“There is no hope of peace because the committees formed by government and the Taliban have no power to negotiate sensitive matters,” says Muhammad Rasool Bangash, a history teacher at the Abdul Wali Khan University in Mardan in Khyber Pakhtunkhwa province in the north of Pakistan.

“There is no hope of peace because the committees formed by government and the Taliban have no power to negotiate sensitive matters.”

“The committees should have been represented by government and the Taliban. Without bringing [the] Taliban and the government face-to-face it is difficult to have peace.”

The government has been giving mixed signals. On Jan. 23, at a meeting held under the chairmanship of Sharif, and attended by the top brass of the Pakistan army, it was decided that force would be used against the Taliban.

“We cannot surrender state authority to the Taliban. We will talk to those who want to surrender before talks,” Sharif said in a statement.

Voices calling for convincing dialogue are growing louder as international forces prepare to withdraw from neighbouring Afghanistan by the end of 2014 – a move that is widely expected to strengthen the militants. Meanwhile, the Tehreek Taliban Pakistan (TTP) continues to carry out ruthless attacks.

On Feb. 2, a bomb attack in a Peshawar cinema hall killed five persons. “Continuation of Taliban attacks means they aren’t serious in talks,” says Shahabuddin Khan, an elderly man who migrated to Peshawar from North Waziristan. Peshawar is the capital of Khyber Pakhtunkhwa.

“The withdrawal of U.S. forces will give immense strength to the Taliban who can gain complete control of bordering areas of Pakistan and Afghanistan,” says Shahabuddin Khan.

“The Taliban will get stronger as U.S.-led forces withdraw from Afghanistan,” Z.A. Hilali, professor of international studies at the University of Peshawar, tells IPS. “Pakistan and Afghanistan’s border areas are infested with militants who can pose a serious threat to the governments in these countries.”

Cricketer-turned-politician Imran Khan, whose party Pakistan Tehreek Insaf (PTI) is in power in Khyber Pakhtunkhwa province, is a staunch supporter of peace talks with the Taliban.

Khyber Pakhtunkhwa, located near the Federally Administered Tribal Areas (FATA) of Pakistan where the Taliban are very active, bears the brunt of Taliban attacks. The Taliban along with Al-Qaeda members took refuge in FATA when their government was toppled in Afghanistan in 2001. Many Taliban members from Afghanistan have merged with Taliban groups from Pakistan.

Imran Khan says military operations against the Taliban since 2004 have not brought any success and the Taliban have only become stronger.

“I have been listening to statements like ‘the back of the Taliban has been broken’, but the results are before the nation. Every day we see attacks in which innocent people are killed. The only way for durable peace is dialogue with militants,” Imran Khan tells IPS.

His party believes that making peace with the Taliban is essential for the progress of Pakistan.

“Without peace, we cannot make progress. There is no investment in the province, and as a result people will get poorer,” says Asad Umar, member of the National Assembly from the PTI.

“We have planned reforms to bring investment to the province. But for that we need to talk to the Taliban to pave the way for peace,” Umar tells IPS.

The Taliban too have been asking the government to begin “serious and meaningful” talks.

Political analyst Dr Abdul Jabbar says talks are important as the government will not be able to match the Taliban’s might after the withdrawal of international forces from Afghanistan.

“Only 8,000-12,000 soldiers, most of them American, will remain in Afghanistan to assist Afghan forces in their fight against the Taliban,” he says. “In that scenario it would be extremely difficult to battle the Taliban because even at the moment, when there are about 37,500 U.S. troops in Afghanistan, along with 19,000 forces from other countries in the NATO-led coalition, they are very strong.

“The Taliban are carrying out bomb and suicide attacks in Afghanistan and Pakistan at will. And they can pose a serious challenge to both the militancy-prone countries after the international forces leave.”

Sharif has come under much criticism for delaying talks with the Taliban.

Political analysts say he is banking on his party’s good equations with militant groups based in the Punjab province, but that this will not help in the long run. Sharif’s younger brother Shahbaz Sharif has been chief minister of Punjab for the last six years.

“Lately, we have seen several attacks in Punjab. The Taliban have targeted police, army and public places in Punjab, and the situation could get worse,” Jabbar says.

The main opposition Pakistan People’s Party, whose leader Benazir Bhutto was killed in 2007, wants the government to take a clear stand on whether it wants to hold a dialogue or carry out operations against the TTP.

“The entire nation is united on fighting terrorism and the time has come to arrive at a final decision to wipe out the elements who take the lives of innocent people,” Khursheed Shah, PPP member and leader of the opposition in the National Assembly tells IPS.

“The only option we have is talks with militants,” Imran Khan tells IPS.

“If the U.S. can talk to the Afghan Taliban, then why can we not talk to the Pakistani Taliban? It is time we came out of the U.S.-led war because we have lost 50,000 people, including 5,000 soldiers and 100 billion dollars in the so-called war.”