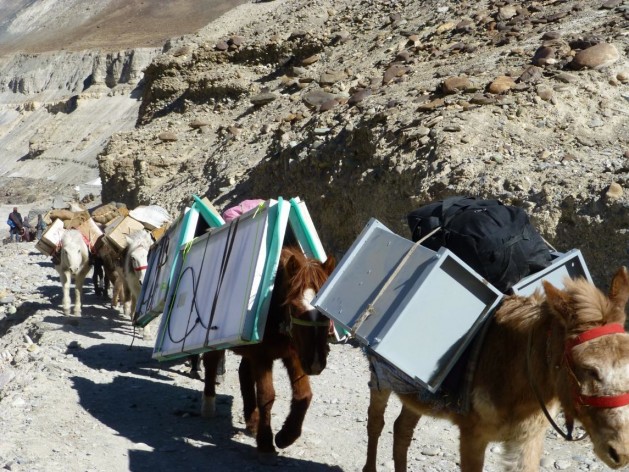 Mules carry a solar energy system to a remote region in the Himalayan desert region of Ladakh. Credit: Athar Parvaiz/IPS.

LEH, India, Feb 24 2014 (IPS) - Surendar Mohan, a catering assistant at the residential school Jawahar Navodiya Vidyalya, looks thankfully up at the sun from this cold high-altitude desert in northwest India.

“Now things have become quite easy for our workers,” he tells IPS. “Earlier, we had to use a lot of dishes for cooking rice, pulses and vegetables, but now the big solar dishes have made our job much easier.” A five-dish solar steam cooking system can cook for up to 600 persons at a time.

The region is now witnessing a significant spread of a solar energy network.

“Apart from reducing the workload, cooking in solar dishes also improves the quality of food,” he says. The solar cooking system can cook as much as 150 kilograms of rice, 100 kilograms of vegetables and 30 kilograms of pulses at a time. More than 570 students and staff have their meals here.

“It is not only very easy to operate, but it provides us [with] hot water for washing the dishes in the cold season,” says Tashi, one of the kitchen staff.

Mohan says solar cooking saves the school a lot of money. “Every day, we save three gas cylinders.”

Over the past few decades, many people from this arid plateau in India’s northern state Jammu and Kashmir have been using diesel generators for lights, and kerosene and firewood for cooking and heating water.

“This not only polluted the atmosphere, but would involve huge finances for transporting diesel, kerosene and firewood to Ladakh given its remoteness from rest of India and its rugged terrain,” says Shahid Wani, who teaches environmental science at Kashmir University.

The region is now witnessing a significant spread of a solar energy network. Takpa says this will not just fulfil the energy needs of Ladakhis, but will produce solar energy for other regions in India.

Ladakh is rich in renewable energy sources and is amongst the world’s most-promising areas for the development of solar projects.

“Ladakh being a cold desert, we don’t have any forests. So all the timber would come from Kashmir while diesel and kerosene would come from India, at a heavy cost,” says Takpa.

But now, says Takpa, after an 87 million dollar project from India’s New and Renewable Energy Ministry for exploiting solar energy in Ladakh, things have changed quite rapidly.

The 50 percent subsidy on solar energy operated devices under the project has captured the imagination of people across Ladakh.

“Every square metre of our land has the potential of generating 1,200 watts of solar power, which is highest in India,” says Lakpa. “And we get more than 320 clear sunny days a year.

“Also, the low outside temperature in Ladakh further improves the efficiency of the solar panels. This is the reason we are regarded as the best for solar energy.”

According to Takpa, the Indian government’s Desert Bank scheme is best suited for Ladakh. He says the government has set a target of generating 400,000 MW of solar energy between 2030 and 2050, of which 100,000 MW will be generated from Ladakh.

“As of now, we have already installed 137 small solar power plants; they have been set up for remote villagers, monasteries, educational institutions and hospitals.”

The impact of this solar energy initiative on the lives of people in Ladakh is already visible. More than 40 villages which had no electricity or had extremely unreliable sources of power have been provided with reliable solar energy and solar water heaters.

Just about every household and hotel in Leh, the capital of Ladakh, has a solar water heating system. A solar cooking apparatus can be seen outside most houses.

“All this has remarkably reduced the dependency on diesel, kerosene and firewood,” says Wani.