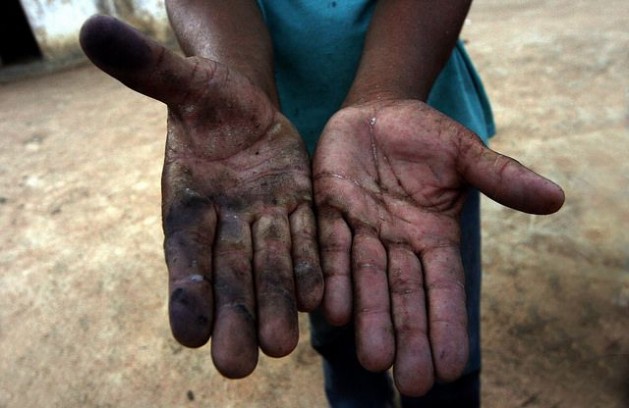 A rural worker on a cassava plantation in Pesqueira, Pernambuco in northeast Brazil holds out his damaged hands, testimony to the appalling slave labour conditions he was forced to work under. Credit: Alejandro Arigón/IPS

RIO DE JANEIRO, Apr 30 2014 (IPS) - The upcoming mega sporting events in Brazil are paving a new route for slave labour among those migrating from rural areas to the cities in search of work.

The dream of a good job draws many rural migrants from Brazil’s poorest regions, as well as neighbouring countries, to try their luck in big cities. But sometimes their dreams turn into nightmares.

Slave labour remains largely a rural phenomenon in Brazil, where it still occurs on cattle ranches, sugar cane plantations and charcoal farms in remote areas. But it has been growing more recently in the textile and garment industry as well.

The shift to urban areas has made it difficult to fight, said experts consulted by IPS.

Cícero Guedes survived several decades of work in slavery conditions, like thousands of other rural workers in Brazil who move around the country in search of work and fall victim to forced labour.

The slow pace of reform

A proposed constitutional amendment for the expropriation, without compensation, of the land of those found guilty of exploitative labour practices was introduced in the Brazilian Congress in 1995 and has still not been passed.

Under the bill, the land seized by the state would be redistributed under the land reform programme or would be used for the construction of affordable housing.

Despite the staunch opposition of the “rural bloc” of legislators, the amendment was approved in the lower house of Congress in 2012. It is now working its way through the Senate.

There are an estimated 18 million victims of forced labour worldwide, including 25,000 to 40,000 in Brazil.

A 2003 reform of Brazil’s penal code incorporated the concept of slave-like labour marked by degrading conditions, long hours and other violations of basic rights that endanger the health and life of the worker. Other characteristics are forced labour – due to fraudulent recruiting, geographic isolation, threats or physical and psychological violence – and debt bondage.

The crime is punishable by two to eight years in prison.

That same year a national commission was created under the presidency’s secretariat of rights, with the aim of coordinating and implementing the National Plan for the Eradication of Slave Labour, which was renewed in 2008.

“I worked hungry many times, without anything to eat,” he told IPS some time ago during a meeting of the Landless Rural Workers Movement (MST). “No one can work a whole day without eating a thing. My lunch was sucking on sugar cane; the suffering is marked on your face. I worked in plantations, sugar mills, factories, and the pay was next to nothing.”

Born in the state of Alagoas in Brazil’s impoverished Northeast, Guedes started to work at the age of eight and never went to school. He began to travel around the country in search of work on sugar cane plantations.

“I worked and worked and couldn’t see any way to improve my situation,” he said. “Slavery is when a person’s dignity isn’t respected, and when they are humiliated.”

In 2002, thanks to the government’s agrarian reform programme, he managed to settle on a piece of land in the north of the state of Rio de Janeiro with his wife and their three children.

But on Jan. 25, 2013, Guedes was shot to death at the age of 58 near the Cambahyba sugar mill in the municipality of Campos dos Goytacazes, in the north of Rio de Janeiro state, where he was organising an MST occupation of a 3,500-hectare complex of seven sugar plantations.

Nearly 20 years ago, Brazil recognised that slave labour exists in the country, formally labelling it “slavery-like labour”, since slavery as such was abolished in 1888.

There are widespread abusive labour recruitment practices in Brazil which lead to debt bondage and deprivation of liberty.

“We are far from putting an end to the problem and not only in Brazil, which took a big step by recognising it. There are countries that don’t acknowledge that it exists, and don’t take measures to fight it,” said Luiz Machado, national coordinator of the International Labour Organisation’s Special Action Programme to Combat Forced Labour.

By ratifying the ILO Forced Labour Convention in 1957, Brazil committed itself to eradicating the practice and promoting decent work.

But a public system to combat the crime was not created until 1995. According to the Labour Ministry, 44,415 people were rescued from slave-like working conditions between 1995 and 2012, and the victims received a combined total of 35 million dollars in compensation.

The ministry also reported that some 2,600 workers a year have been rescued since 2010.

Machado said the United Nations is worried about a sharp increase in slave labour ahead of and during the Jun. 12-Jul. 13 FIFA World Cup and the 2016 Olympic Games, to be hosted by Brazil.

“These major events draw workers from around the country, and immigrants, for the construction of stadiums,” he explained. “Major infrastructure works also have a social impact, in terms of sexual exploitation and even child labour.

“We are on the alert, and we have negotiated agreements with the government and the private sector to promote and guarantee decent work,” he said.

A number of rescue operations have already been carried out this year by a special Labour Ministry mobile inspection team. On Apr. 4, the team rescued 11 crew members working in slave-like conditions on the MSC Magnifica, an Italian cruise liner, after raiding the ship in the northeastern city of Salvador de Bahía.

According to the authorities, the crew members were forced to work up to 16 hours a day and suffered from abuse, bullying and fraudulent recording of the hours they worked, while some were subjected to sexual harassment.

The ship belongs to the Italian company MSC Crociere, one of the world’s biggest cruise operators.

On Apr. 20, a Brazilian court rejected an appeal by Zara, an international fashion chain that belongs to the Spanish company Inditex, regarding its responsibility for the slavery conditions to which 15 workers were subjected. They were discovered in 2011 in a factory where the chain’s garments were produced.

The corporation argues that it was unaware of the irregularities committed by the factory, one of its 50 subcontractors in Brazil. But the court found Zara to be directly responsible for the abuses and asked for it to be included on a list of companies with exploitative labour practices.

In March, 17 Peruvian workers were freed from a textile sweatshop in the southern Brazilian city of São Paulo. They worked more than 14 hours a day, seven days a week, monitored by cameras. Their documents were being held by the owners of the company.

The workers were between the ages of 18 and 30 and earned 1.03 dollars per garment, which in clothing stores sold for 45 dollars each.

The ILO’s Machado said there is a new trend of exploiting mainly foreign workers.

“There is a large contingent of Bolivians, Paraguayans, Peruvians, and recently, Haitians, who come in search of a dream and the chance of a better life. Many of them come in to the country without papers and are afraid of being deported,” he said.

Fear of being caught by the authorities gives rise to “a pact of silence” among the immigrants, who do not file complaints about their employers, which would activate an investigation.

The slave workers tend to be mixed-race young people between the ages of 18 and 35. But in urban areas, there is a growing proportion of women and underage minors in clandestine textile sweatshops.

Nevertheless, slave labour continues to be more common in the agricultural sector in this country of 198 million people. Campos dos Goytacazes, a municipality of 463,000 people in a farming area in the north of the state of Rio de Janeiro, won the dubious title of the “national capital” of slave labour in 2009.

“The biggest rescue operation ever of sugar cane cutters in Brazil was carried out that year,” social worker Carolina Abreu, with the Pastoral Land Commission, which forms part of the Popular Committee for the Eradication of Slave Labour in the Northern Fluminense, told IPS.

“During harvest time, one single sugar mill can hire as many as 5,000 workers, and those who come from outside the area end up becoming trapped in debt to survive, working in precarious conditions.”

In 2009, the Labour Ministry rescued 4,535 workers from slave-like conditions, and 715 cases were discovered in Campos de Goytacazes alone.

“That’s why [the municipality] won the prize,” Abreu said. “Besides the sugar cane sector, irregularities have been found on pineapple plantations and cattle ranches. Workers do not have contracts, and they earn less than the minimum wage [of 320 dollars a month].”

The mechanisation of sugar cane production worries cane cutters, who are afraid of losing their jobs, and as a result accept exhausting hours. According to the Pastoral Land Commission, workers cut between seven and 10 tons of sugar cane each per day.

Labour accidents are frequent. An average of 70 workers a year with machete cuts are rushed to the municipal hospital where Abreu works, in Travessão, a rural area of Campos de Goytacazes.

Then there are the sugar cane cutters who come in because of cramps and other problems caused by the repetitive nature of their work, which are not registered as work-related cases.

“Many come to save up some money to send their families, because in their home regions there is no work,” Abreu said. “They live in the most absolute poverty, and are underfed and exhausted.”