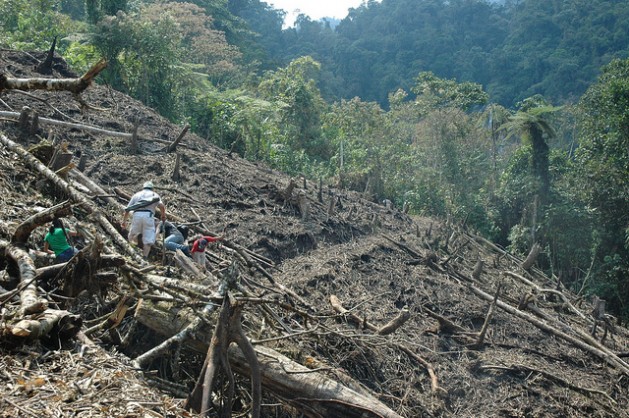 WASHINGTON, Apr 9 2014 (IPS) - Indigenous leaders are warning of increased violence in the fight to save their dwindling forests and ecosystems from extractive companies.

Indigenous representatives and environmental activists from Africa, Asia, Australia and the Americas met over the weekend here to commemorate those leading community fights against extractive industries. The conference, called Chico Vive, honoured Chico Mendes, a Brazilian rubber-tapper killed in 1988 for fighting to save the Amazon.

“Right now in our territory we can’t drink the water because it’s so contaminated from the hydrocarbons from the oil and gas industry." -- Chief Liz Logan of the Fort Nelson First Nation in BC, Canada

The gathering also recognised leaders who are continuing that legacy today.

“His struggle, to which he gave his life, did not end with his death – on the contrary,” John Knox, the United Nations independent expert on human rights and the environment, said at the conference. “But it continues to claim the lives of others who fight for human rights and environmental protection.”

A 2012 report by Global Witness, a watchdog and activist group, estimates that over 711 people – activists, journalists and community members – had been killed defending their land-based rights over the previous decade.

Those gathered at this weekend’s conference discussed not only those have been killed, injured or jailed. They also shared some success stories.

“In 2002, there was an Argentinean oil company trying to drill in our area. Some of our people opposed this, and they were thrown in jail,” Franco Viteri, president of the Confederation of Indigenous Nationalities of the Ecuadorian Amazon, told IPS.

“However, we fought their imprisonment and the Inter-American Court of Human Rights ruled in our favour. Thus, our town was able to reclaim the land and keep the oil company out.”

Motivated by oil exploration-related devastation in the north, Ecuadorian communities in the south are continuing to fight to defend their territory. Viteri says some communities have now been successful in doing so for a quarter-century.

But he cautions that this fight is not over, particularly as the Ecuadorian government flip-flops on its own policy stance.

“The discourse of [President Rafael] Correa is very environmentalist, but in a practical way it is totally false,” he says. “The government is taking the oil because they receive money from China, which needs oil.”

China has significantly increased its focus on Latin America in recent years. According to a briefing paper by Amazon Watch, a nonprofit that works to protect the rainforest and rights of its indigenous inhabitants, “in 2013 China bought nearly 90% of Ecuador’s oil and provided an estimated 61% of its external financing.”

Many others at the conference had likewise already seen negative impacts due to extractives exploration and development in their community.

“We have oil and gas, mines, we have forestry, we have agriculture, and we have hydroelectric dams,” Chief Liz Logan of the Fort Nelson First Nation in British Columbia, Canada, told IPS.

“Right now in our territory we can’t drink the water because it’s so contaminated from the hydrocarbons from the oil and gas industry … The rates of cancer in our community are skyrocketing and we wonder why. But no one wants to look at this, because it might mean that what [extractives companies] are doing is affecting us and the animals.”

Logan described the work of protecting the community as a “little dance”: first they bring the government to court when they do not implement previous agreements, then they have to ensure that the government actually implements what the court orders.

Others discussed possible solutions to stop the destruction of ecosystems, and what is at stake for the communities living in them. The link between local land conflicts and global climate change consistently reappeared throughout many of the discussions.

“My community is made up of small-scale farmers and pastoralists who depend on cattle to live. For them, a cow is everything and to have the land to graze is everything,” said Godfrey Massay, an activist leader from the Land Rights Institute in Tanzania.

“These people are constantly threatened by large-scale investors who try to take away their land. But they are far more threatened by climate change, which is also affecting their livelihood.”

Andrew Miller of Amazon Watch described the case of the contentious Belo Monte dam in Brazil, which is currently under construction. Local communities oppose the dam because those upstream would be flooded and those downstream would suddenly find their river’s waters severely reduced.

“People are fighting battles on local levels, but they are also emblematic of global trends and they are also related to a lot of the climate things going on,” Miller told IPS. “[Hydroelectric] dams, for example, are sold as clean energy, but they generate a lot of methane, which is a powerful greenhouse gas.”

According to Miller, one value of large gatherings such as this weekend’s conference is allowing participants to see the similarities between experiences and struggles around the world, despite often different cultural, political and environmental contexts.

“In each case there are things that are very specific to them,” Miller said. “But I think we are also going to see some trends in terms of governments and other actors cracking down and trying to limit the political space, the ability for these folks to be effective in their work and to have a broader impact on policy.”

Yet activists like Viteri, from Ecuador, remain determined to protect their land.

“We care for the forest as a living thing because it gives us everything – life, shade, food, water, agriculture,” Viteri said. “It also makes us rich, even if it is a different kind of richness. This is why we fight.”