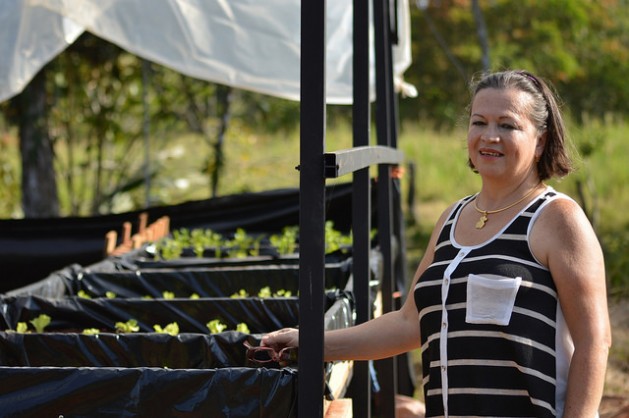 Olga Vargas next to the greenhouse with which the Quebrada Grande de Pital Women’s Association began to revitalise its sustainable business, whose priority is reforestation. Credit: Diego Arguedas Ortiz/IPS

PITAL, Costa Rica , Apr 2 2014 (IPS) - Olga Vargas, a breast cancer survivor, is back in the countryside, working in a forestry programme in the north of Costa Rica aimed at empowering women while at the same time mitigating the effects of climate change.

Her recent illness and a community dispute over the land the project previously used – granted by the Agrarian Development Institute, where the women had planted 12,000 trees – stalled the reforestation and environmental education project since 2012 in Pital, San Carlos district, in the country’s northern plains.

But the group is getting a fresh start.

“After the cancer I feel that God gave me a second chance, to continue with the project and help my companions,” Vargas, a 57-year-old former accountant, told IPS in the Quebrada Grande forest reserve, which her group helps to maintain.

She is a mother of four and grandmother of six; her two grown daughters also participate in the group, and her husband has always supported her, she says proudly.

Since 2000, the Quebrada Grande de Pital Women’s Association, made up of 14 women and presided over by Vargas, has reforested the land granted to them, organised environmental protection courses, set up breeding tanks for the sustainable fishing of tilapia, and engaged in initiatives in rural tourism and organic agriculture.

But the top priority has been planting trees.

A group of local men who opposed the granting of the land to the women from the start demanded that the installations and business endeavours be taken over by the community.

The women were given another piece of land, smaller than one hectare in size, but which is in the name of the Association, and their previous installations were virtually abandoned.

“I learned about the importance of forest management in a meeting I attended in Guatemala. After that, several of us travelled to Panama, El Salvador and Argentina, to find out about similar initiatives and exchange experiences,” said Vargas, who used to work as an accountant in Pital, 135 km north of San José.

The most the Association has earned in a year was 14,000 dollars. “Maybe 50,000 colones [100 dollars] sounds like very little. But for us, rural women who used to depend on our husband’s income to buy household items or go to the doctor, it’s a lot,” Vargas said.

The Association, whose members range in age from 18 to 67, is not on its own. Over the last decade, groups of Costa Rican women coming up with solutions against deforestation have emerged in rural communities around the country.

These groups took up the challenge and started to plant trees and to set up greenhouses, in response to the local authorities’ failure to take action in the face of deforestation and land use changes.

“Climate change has had a huge effect on agricultural production,” Vargas said. “You should see how hot it’s been, and the rivers are just pitiful. Around three or four years ago the rivers flowed really strong, but now there’s only one-third or one-fourth as much water.” 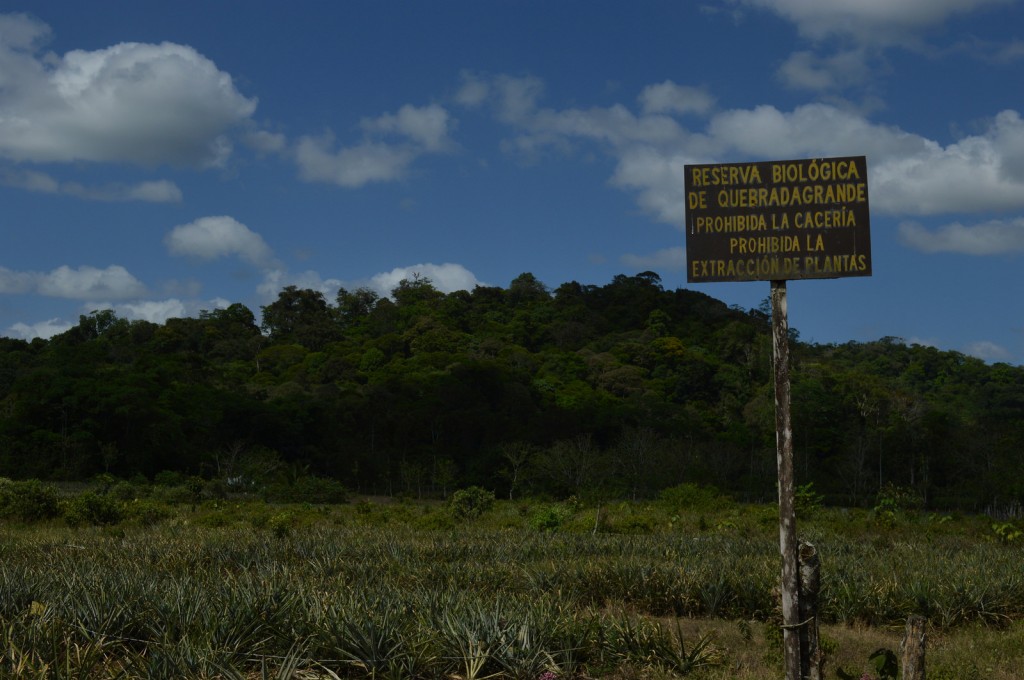 In Quebrada Grande, the Agrarian Development Institute dedicated 119 hectares of land to forest conservation, which the Womens’ Association has been looking after for over a decade. Credit: Diego Arguedas Ortiz/IPS

Since 2007, the six women in the Group of Agribusiness Women of San Ramón have had a contract with Costa Rica’s electric company, ICE, to provide it with acacia, Mexican cedar, and eucalyptus seedlings.

The group’s coordinator, Nuria Céspedes, explained to IPS that the initiative emerged when she asked her husband for a piece of the family farm to set up a greenhouse.

“Seven years ago, I went to a few meetings on biological corridors and I was struck by the problem of deforestation, because they explain climate change has been aggravated by deforestation,” said Céspedes, who added that the group has the active support of her husband, and has managed to expand its list of customers.

Costa Rica, which is famous for its forests, is one of the few countries in the world that has managed to turn around a previously high rate of deforestation.

In 1987, the low point for this Central American country’s jungles, only 21 percent of the national territory was covered by forest, compared to 75 percent in 1940.

That marked the start of an aggressive reforestation programme, thanks to which forests covered 52 percent of the territory by 2012.

Costa Rica has set itself the goal of becoming the first country in the world to achieve carbon neutrality by 2021. And in the fight against climate change, it projects that carbon sequestration by its forests will contribute 75 percent of the emissions reduction needed to achieve that goal.

In this country of 4.4 million people, these groups of women have found a niche in forest conservation that also helps them combat sexist cultural norms and the heavy concentration of land in the hands of men.

“One of the strong points [of women’s participation] is having access to education – they have been given the possibility of taking part in workshops and trainings,” Arturo Ureña, the technical head of the Coordinating Association of Indigenous and Community Agroforestry in Central America (ACICAFOC) , told IPS.

That was true for the Pital Association. When they started their project, the women received courses from the Instituto Nacional de Aprendizaje (national training institute), which made it possible for two illiterate members of the group to take their final exams orally.

Added to these community initiatives are government strategies. More and more women are being included in state programmes that foment agroforestry production, such as the EcoMercado (ecomarket) of the National Forest Finance Fund (Fonafifo).

EcoMercado is part of the Environmental Services Programme of Fonafifo, one of the pillars of carbon sequestration in Costa Rica.

Since Fonafifo was created in the mid-1990s, 770,000 hectares, out of the country’s total of 5.1 million, have been included in the forestry strategy, with initiatives ranging from reforestation to agroforestry projects.

Lucrecia Guillén, who keeps Fonafifo’s statistics and is head of its environmental services management department, confirmed to IPS that the participation of women in reforestation projects is growing.

She stressed that in the case of the EcoMercado, women’s participation increased 185 percent between 2009 and 2013, which translated into a growth in the number of women farmers from 474 to 877. She clarified, however, that land ownership and the agroforestry industry were still dominated by men.

Statistics from Fonafifo indicate that in the EcoMercado project, only 16 percent of the farms are owned by women, while 37 are owned by individual men and 47 percent are in the hands of corporations, which are mainly headed by men.

But Guillén sees no reason to feel discouraged. “Women are better informed now, and that has boosted participation” and will continue to do so, she said.