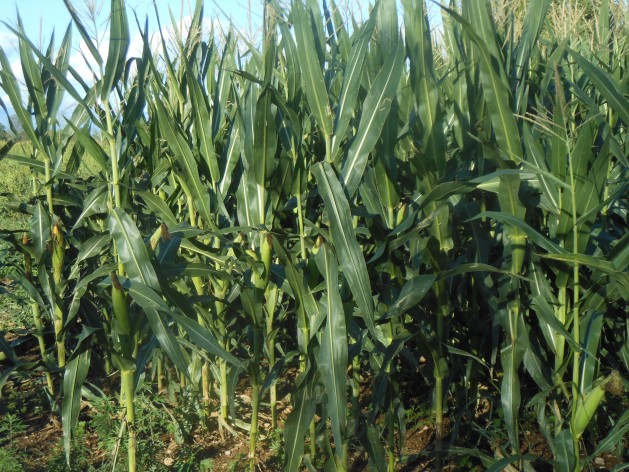 LUCCA, Italy, May 25 2014 (IPS) - “I  want to grow genetically modified organisms (GMOs) because I want to feed my family with biotech products. In no way do I want to eat biological food because I think it’s not so healthy or nutritious.”

This is how Giorgio Fidenato, Italian farmer and President of Agricoltori Federati (Federated Farmers), explained to IPS the reason behind his fight against the Italian ban on Monsanto’s genetically modified MON810 maize.

“I’ve already sown [GMO maize] in three different plots this year and I have self-denounced myself for doing so” -- Giorgio Fidenato, Italian farmer, President of Agricoltori Federati (Federated Farmers)
The Monsanto maize is the only GMO allowed for cultivation throughout the European Union, and the directive that regulates the deliberate release into the environment of GMOs, Directive 2001/18/EC, includes a ‘safeguard clause’ that allows member states to prohibit such cultivation, provided that they “have justifiable reasons to consider that the GMO in question poses a risk to human health or the environment”.

So far, 129.000 hectares of land – roughly the area covered by a city the size of Rome – are being cultivated with genetically modified corn in Europe, 90 percent of which is in Spain, while the rest is spread across Portugal, the Czech Republic, Slovakia and Romania.

“On the other hand,” said Croce, “Italy used an emergency-measure procedure that bans them only temporarily.” The inter-ministerial decree banning GMO maize has a validity of 18 months. “If nothing happens in the meantime, at the end of 2014, Fidenato will be free to grow Monsanto’s genetically modified maize,” Croce explained.

However, Fidenato has no intention of waiting. In the last three years, he has already sown his three hectares of land with MON810, fuelling strong protests by environmentalist groups and sparking a huge debate in the country. “My first harvest, in 2010, was confiscated by the authorities. My farm was under legal possession until May this year, but I’ve already sown in three different plots this year and I have self-denounced myself for doing so.”

Despite the upholding of the national ban by the Regional Court of Lazio, to which Fidenato had appealed in October last year, the farmer is not giving up and has already presented another appeal to the Council of State. “This is my chance to show the arrogance and iniquity of democracy, because here we are facing the pretension that, just because the majority does not want GMOs, I can’t eat them either. What I say is: if you don’t want them, don’t buy my products.”

But not all agriculturists see farming the way Fidenato sees it. Lucca, in Tuscany, is the Italian province with the highest concentration of biodynamic farms. Like the majority of those, Gabriele Da Prato’s ranch farm in the mountain region of Garfagnana, north of Lucca, produces wine. For him, his choices – and the choices of the farmers around him – will determine the future of the territory where he grew up.

His farm covers three and half hectares and he is the only ‘employee’, producing around 14,000 bottles of wine each year. “I decided to take over the family farm in 1998, in the years of heavy chemicals, also in subsistence farming,” Da Prato told IPS. 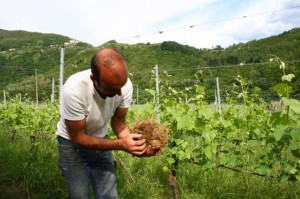 Farmer showing a clump of soil, with “simply no life underneath”. Photo credit: IPS/Silvia Giannelli

In 2000, he began to realise that his land had problems of soil erosion, lack of potassium and calcium, “but what bothered me the most was to find out, by observing the clumps of soil, that there was simply no life underneath. This was the consequence of years and years of chemical use: artificial fertilisers had impoverished the soil, herbicides had killed all the grass, the butterflies had disappeared, it was a disaster.”

It was then that he took a radical decision and began to apply biodynamic methods, using uniquely natural substances, such as mineral, plant, or animal manure extracts to enhance soil quality. For him, opening the doors to GMOs in Italy is simply nonsense: “First of all, Italy’s surface area isn’t big enough to compete with giants such as North America in the field of GMOs. High quality, inimitable products and our territorial identity, these are our trump cards,” Da Prato stressed.

But beyond the economic factor, threats to the ecosystem seem to be his biggest concern. “On a field sown with GMOs, the water simply slips away. My plot, which is healthy and lively, can hold up to 90 percent of water. Last year we had a big flood, and I can thank my biodynamic vineyard if my house is still intact,” Da Prato said. “Once we are done exploiting our territory to fill up the wallet, and the earth won’t be able to give us food any longer, then maybe people will start asking themselves what happened,” he concluded sadly.

The legal battle between these two points of view is still on, as Croce explained: “The EU is in the process of reforming the directive on GMOs, and this will likely happen during the Italian presidency (July-December 2014). Based on the current negotiations, we are hopeful that the new regulation will include an additional clause allowing member states to ban GMOs also for economic reasons, which is crucial for ‘Made in Italy’ exports.”

Yet, Fidenato remains firm on his position: “When I was a kid, I used to go with my mother to pull out weeds with my bare hands, I know what it means and they won’t make me go back to that. Others can keep doing so if they like, I won’t.”