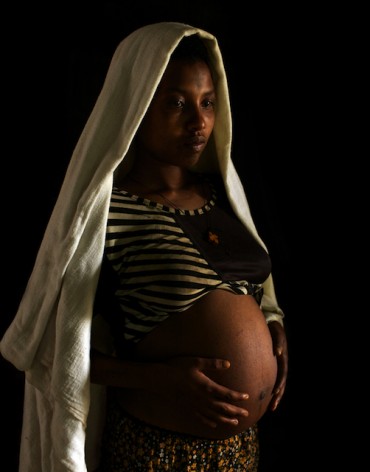 Seven month pregnant Debritu, 14, escaped from her husband after months of abuse. She is now homeless and is uncertain of the future for her and her baby. Several social, cultural, religious and traditional beliefs and norms are known to fuel the continuation of child marriage in Africa. Courtesy: Stephanie Sinclair/United Nations Population Fund (UNFPA)

JOHANNESBURG, May 28 2014 (IPS) - Just 17 years old, Clarisse is already a mother of two, who lives with her husband and his four other wives in rural southern Chad. Three years earlier, she had watched her mom and sisters preparing food for a party one day. At first she celebrated along with everyone else, not realising it was her own wedding ceremony. When she discovered this, she was frantic.

The African continent has tolerated child marriage for too long, based on a host of ill-conceived justifications and arguments... Child marriage should not be allowed to continue. Not one day longer.

Clarisse is one of millions of girls around the world, and especially in Africa, who are married off each year. Many of them become wives as early as eight years old, often to much older men.

Globally, one in three girls from low and middle income countries is married before the age of 18, and one in nine by age 15. It is estimated that every year, over 15.1 million girls will become brides, if this trend continues.

Of the 41 countries worldwide with a child marriage prevalence rate of 30 percent or more, 30 countries are located in Africa. The practice is most severe in West Africa, where two women out of five are married before age 18; and one woman out of six is married by the  time she turns 15.

Several social, cultural, religious and traditional beliefs and norms are known to fuel the continuation of child marriage in Africa.

In addition, the economic dimension is a driving force of the practice. To many families living in poverty, child marriage is a source of income and therefore an economic survival strategy.

The impact of child marriage

Regardless of the contributing factors and justifications cited for the practice, child marriage has a severe and harmful impact on our girls, and on society at large. It compromises the girl child’s health, education and opportunities to realise her potential.

Many ‘child wives’ are exposed to repeated pregnancies and childbirth before they are physically and psychologically ready.

In Sudan, Awatif, now 24, was married off at age 14 while still in school. Against her will, she dropped out of school in the fifth grade and immediately  became pregnant. “I went through days of obstructed labour at home; it was painful and I thought I would die. My family took me to the hospital for assistance. I survived but my son didn’t and I contracted obstetric fistula,” she says. As a consequence, her husband abandoned and divorced her. 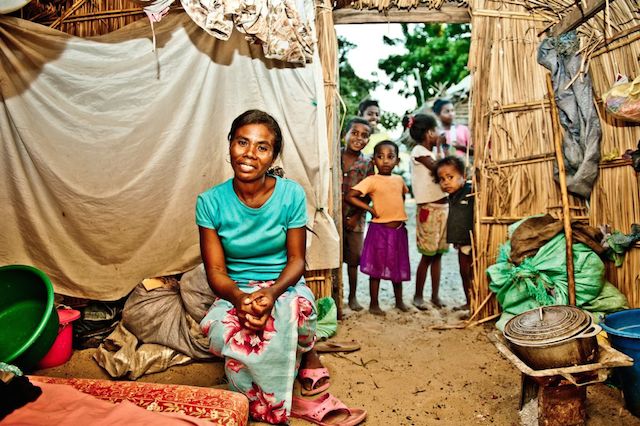 Alphonsine Zara, 35, was married off traditionally at the age 16. She is still suffering from the harsh consequences of her early marriage. Courtesy: United Nations Population Fund (UNFPA)

Child marriage can be challenged

It is therefore an obligation of policy makers on the continent to protect the rights of the girl child that their governments have committed themselves to uphold. This includes putting an end to child marriage.

If the practice of child marriage is to be halted, action is needed at all levels to change harmful social norms and to empower girls. Specifically, governments, civil society, community leaders and families that are serious about ending child marriage should consider promulgating, enforcing and building community support for laws on the minimum age of marriage.

Ending child marriage would not only help protect girls’ rights but would go a long way towards reducing the prevalence of adolescent pregnancy. Zero tolerance of child marriage should be our goal. Enacting laws that ban child marriage is a good first step – but unless laws are enforced and communities support these laws, there will be little impact.

Great efforts yielding promising results are being undertaken across the continent to challenge the status quo of this harmful practice. We have witnessed good practices such as the Schools of Husbands in Niger and the Adolescent Girls Initiatives in many African countries.

In Mozambique, the initiative known as “Girls’ Forum” has provided a platform for girls to improve their decision-making powers; to increase their sense of empowerment; and to build their understanding regarding questions of marriage and sexual and reproductive health.

Education is not only the key to unlocking girls’ potential; but it also contributes to girls delaying marriage across the continent. Studies have established that girls with low levels of education are more likely to be married early, while those with secondary education are up to six times less likely to marry as children.

Compulsory education for all, especially girls, is therefore a key intervention for policy makers to put into practice.

The African Union and the End Child Marriage campaign

The continent has witnessed renewed political commitment to addressing the problem of child marriage by African Union Commission (AUC) Chairperson Dr. Nkosazana Dlamini-Zuma. “We must do away with child marriage,” she says. “Girls who end up as brides at a tender age are coerced into having children while they are children themselves.” This commitment is being taken into practice through the launch of a new campaign to end child marriage in Africa.

The overall aims of the campaign are to:

Joining forces to commit to girls’ achieving their potential

The African continent has tolerated child marriage for too long, based on a host of ill-conceived justifications and arguments. But our young girls, who have borne the brunt of this detrimental practice to date, cannot wait to see it banished forever. Child marriage should not be allowed to continue. Not one day longer.