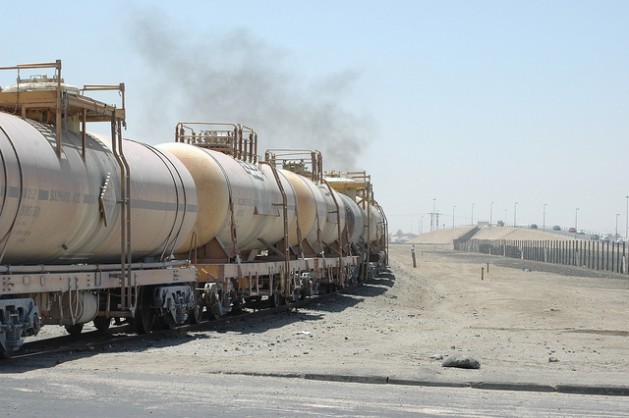 Rail networks in Africa remain underdeveloped only 10 percent of transport goes via rail. A train crossing the Namib Desert on its way from the Namibian port of Walvis Bay to the uranium rich Erongo Region. Credit: Servaas van den Bosch/IPS

The joint project, known as Democracy Works, also pushes back on a trend that has strengthened in the aftermath of the 2008-2009 global financial crisis: policy discussion over the benefits of authoritarian systems. Key in this debate has been the Chinese government, which has continued to deliver high levels of growth and lift hundreds of millions of people out of poverty.

“What interests me about this story is that the global debate about this is very real,” Anne Applebaum, the project’s editor, said this week at a Washington launch of the Democracy Works final report.

“A few days ago the president of Egypt made a comment that ‘We can’t have that Western style of democracy – it just won’t work.’ And the point is that, to more countries than you may think, there does seem like there’s a dichotomy: you can choose to be Sweden, on the one hand, or China.”

Democracy Works is a collaboration between the Legatum Institute, in London, and the Centre for Development and Enterprise, in Johannesburg.

While the project highlights the IBSA nations as examples from the Global South where democracy has worked, it starts from an understanding that democracy is neither better nor worse than authoritarian regimes at economic development.

“We know from various empirical studies that democracy, as a form of governance, neither helps nor hurts economic development,” Ted Piccone, a foreign policy scholar at the Brookings Institution, a think tank in Washington, told IPS.

“The one advantage that democracies have is that they avoid the big swings that you see in non-democratic states with high peaks and low periods, and those low periods can trigger famine, hunger, violence, conflict. In general, there’s more open competition around political power, and that gives the investor or business community more predictability and reliability.”

Despite starkly differing histories, India, Brazil and South Africa are today all considered stable democracies, and each has experienced high strong growth seen as benefiting large numbers of people.

“These three countries demonstrate that it is possible to be an ethnically divided, socioeconomically divided, unequal, relatively poor country, and nevertheless maintain a democracy,” Applebaum says.

“Democracy confers some advantages – human rights, freedom of the press, freedom of speech. And while having all those things, you can have, at the same time, economic development.”

Of the three, South Africa is the youngest democracy, transitioning only in 1994. The ruling party, the African National Congress, has instituted reforms aimed at mitigating racial imbalances in terms of jobs and land ownership, and the country’s democratic system is credited with allowing for far greater political participation than during apartheid.

Meanwhile, South Africa’s poverty rate has declined, particularly over the past decade, according to most ways of calculating this figure.

Brazil returned to democracy during the 1980s, though since then the country’s economic growth has been erratic. However, the overall trend of economic growth and robust welfare programmes has left Brazil with increased investment, rising productivity and falling income inequality, the Democracy Works analysts note.

Finally, India, one of the world’s largest and most pluralistic countries, has been a stable democracy for the past six and a half decades, ranking 38th out of 165 countries on the Democracy Index put out by The Economist magazine.

In 1991, the country liberalised many aspects of its economy, leading to social concerns but also to a rapid economic growth rate of 8.5 percent, as of 2010 (this figure has since come down). Growth and wealth have also extended to members of the most marginalised parts of society.

India is also an example of successful coalition government, belying the idea that coalitions tend to slow economic growth. Further, there are important ancillary benefits to broadening decision-making: democracies may grow slower, but they also tend to grow more equitably.

For instance, in Brazil between 1990 and 2010, gross domestic product per capita grew from roughly 5,000 to 12,000 dollars. During that same period, a measure of inequality known as the Gini coefficient (where 0 is total equality) fell from .60 to .53.

An opposite trend has been seen in China, meanwhile. Since 1980, shortly after the country began economic reforms, the Chinese Gini coefficient grew from 0.3 to 0.55.

“Democracies are better equipped to deal with inequities,” says Brookings’ Piccone. “Not automatically … you certainly have high levels of inequality in IBSA and the U.S., so it’s a political choice. But at least it’s a choice and allows for debate to happen and for policies to change.”

Indeed, the IBSA countries continue to face significant, even mounting, challenges. Analysts point to ongoing corruption in government sapping the effectiveness of state programmes, while others suggest that redistributive social schemes need to find a better balance with macroeconomic principles.

The authors of Democracy Works recommend that more democracy, rather than less, is the solution. For example, strengthening institutions and checks and balances to cut down on corruption, they say, would make state social policies more efficient by making sure that the resources actually reach the poorest.

The report discusses an Indian website that allows people to report incidences of bribery for government services. One transportation department in India was cited so frequently that its commissioner brought in workers from the website to present their findings to his staff, in an attempt to get them to decrease the amounts of bribes they were demanding.

When a similar site launched in China, the government shut it down within weeks

“Democracies are not just an instrumental tool to get better development but a good in and of itself,” Piccone says.