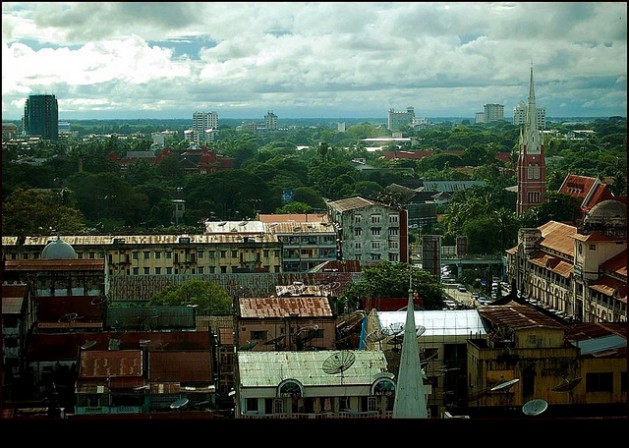 The vast majority of investment in Myanmar is concentrated in Yangon and other cities. Credit: Jose Javier Martin Espartosa/CC CC BY-SA 2.0

The IFC has proposed five new investment projects for Myanmar (also known as Burma). But the U.S. Campaign for Burma, a rights group here, is calling on the multilateral funder to slow down these projects and analyse their potential social effects.

“The IFC has the responsibility to use its financial influence to promote transparency and reform in Burma’s corrupt business environment,” Rachel Wagley, the group’s policy director, said this week.

“Regrettably, the IFC’s recent investment proposals seem to mark a deviation from the IFC’s earlier objective to bolster the growth of microfinance in Burma and may instead exacerbate socioeconomic inequality in the country.”

In 2012, the U.S. Congress repealed sanctions prohibiting U.S. investment in Myanmar to signal its support for the country’s new nominally reformist government, which was slowly instituting democratic reforms after decades under military dictatorship.

That same year, the Washington-based IFC opened its office in Myanmar and began to assess the country’s investment and business climate. Given that over 30 percent of the population lives below the poverty line, IFC officials decided that the country office’s goal would be poverty alleviation, and eventually proposed five investment projects aimed at achieving this goal.

Yet of those five, three involve the construction of upscale hotels. The U.S. Campaign for Burma says it is alarmed by what appears to be a lack of environmental and social safeguards.

For one of the projects, which would develop four hotels, the IFC’s expected development impact is to “create 437 direct and indirect jobs (46 percent female) … and create demand for locally-sourced materials, services, and labour.” In addition, the project would “contribute to the domestic economies through increased tax revenue and foreign exchange inflows.”

The goal of another project, to build a business complex and more hotels, is to install what the IFC calls “critical business infrastructure”.

Yet U.S. Campaign for Burma executive director Jennifer Quigley notes that the international business community has been flocking to the country since 2012.

“And any problems are not for lack of hotel rooms – that’s not what Burma needs to have a thriving business environment,” Quigley told IPS. “The issue isn’t a lack of funding but restrictions that make sure only a few benefit monetarily from foreign trade and investment.”

Another of the IFC-proposed projects, known as Yoma Equity, would provide about 30 million dollars to a programme run by Yoma Bank, a national institution, to finance small- and medium-sized businesses. Such investments are aimed at increasing access to finance for small-scale ventures and to fuel growth in the country’s private sector.

Yet while Quigley’s office supports IFC funding for small- and medium-sized enterprises, she worries that the project will not be well regulated.

“It’s widely considered that the performance standards of the IFC are very good, but then the IFC doesn’t require them to be applied,” she says. “Over 50 percent of projects are classified in such a way that they don’t require the standards.”

The IFC categorises projects in one of four ways, three of which are regulated by the agency’s environmental and social performance standards. The fourth type of project, however, known as FI for ‘financial intermediary’, is excused from these assessments.

Yoma Equity, for instance, is classified as FI-2, meaning that “its business activities have potential limited adverse environmental or social risks or impacts that are few in number,” according to the IFC’s website.

Yet according to Serene Jweied, a spokesperson for the IFC, even FI projects must follow regulations.

“Every financial institution we work with must adhere to our environmental and social requirements and integrity standards,” Jweied told IPS.

“Should IFC engage with Yoma Bank, this requirement would apply to this client as well, and Yoma Bank would have to develop an environmental and social management system commensurate with the risks of the projects and/or clients it finances.”

However, once Yoma Bank develops its own safeguards, as a financial intermediary the IFC would leave any assessment of these safeguards up to the bank itself.

Last year, an independent assessment by the Compliance Advisor/Ombudsman, an internal auditor, criticised the IFC’s regulations of financial intermediaries.

The report looked, for instance, at a loan for 30 million dollars that the IFC gave to Corporation Dinant, a Honduran agribusiness company owned by one of the country’s richest men, Miguel Facusse. Dinant has been accused of killing, kidnapping or forcibly evicting peasants from land claimed by the company.

In response, the IFC has admitted to missteps around Dinant.

In the case of Yoma Equity, the intermediary corporation is less shady than Dinant but, according to observers, still questionable.

These never went forward, however, and as a result Pun has developed a reputation in Myanmar as a “good crony”: less corrupt than the others, and one of the few options for a local business partner.

“Everyone is investing in him,” she says, “so the IFC is perpetuating the same oligarchy that’s in place. The IFC is coming in and reinforcing the status quo.”

Meanwhile, the potential broader impact of the IFC’s projects is also under scrutiny. The majority of Burmese live in rural areas, after all, and agriculture is the livelihood of up to 70 percent of the population, according to Oxfam.

Yet most of the IFC’s projects are focusing on urban areas. Experts say this is simply continuing a broader trend being seen in Myanmar since its economy began to open up.

“A significant factor contributing to the urban versus rural income inequality is that the vast majority of investment in Burma is concentrated in the urban sector, despite the fact that only one-third of the population lives in these areas,” Dennis McCornac, of Loyola University, stated in a recent essay.