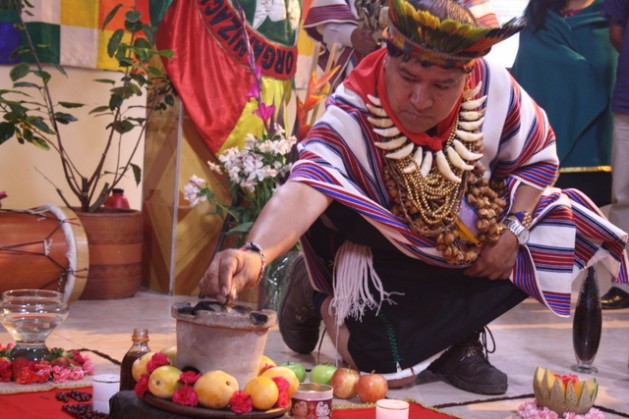 Shaman Víctor Jacanamijoy, spiritual leader of the Inga indigenous people from the Colombian province of Putumayo, leads a ceremony in Bogotá during a Jun. 11 “spiritual harmonisation for peace” event organised nationwide by native authorities to send out a clear message for the elections. Credit: Courtesy of Tatiana Ramírez/ONIC

BOGOTA, Jun 11 2014 (IPS) - Colombians will basically decide Sunday whether to continue the five decade counterinsurgency war or persevere in the attempt to negotiate a political solution to the conflict, in order to allow the children being born this year to experience what their parents have never known: a country at peace.

Depending on the outcome of the Jun. 15 runoff election, an emerging violent sector could take over control of the state, perhaps for the next few decades.

In the second round of the elections to choose the president who will govern this war-torn South American country for the next four years there does not seem to be much choice, between the centre right and the extreme right.

The former is represented by sitting President Juan Manuel Santos, who is seeking reelection, and the latter by Óscar Iván Zuluaga, a follower of senator-elect and former president Álvaro Uribe (2002-2010).

The two candidates are now neck and neck in the polls, after Zuluaga took 29.3 percent of the vote and Santos followed with 25.7 percent in the first round on May 25, when turnout stood at 41 percent.

Both candidates would apply neoliberal, free-market policies, according to which a prospering business community is the lever for the country’s development. They would both keep taxes low for the wealthy, while providing cash subsidies for the poor financed with the revenue expected over the next 20 years or so from the massive production of oil, coal and gold by multinational corporations.

Neither of the two promise to industrialise the country with the capital generated by these non-renewable resources. And both support free trade agreements and associations, which threaten the production of many national industries as well as agriculture, and more specifically small farmers.

Both candidates were ministers under Uribe: Zuluaga headed the Finance Ministry and Santos the Defence Ministry.

Under the Uribe administration some 2.5 million people were displaced by the war and at least 3,000 civilians were murdered by the military and passed off as guerrillas killed in combat – so-called “false positives” – under a body count system in which members of the armed forces were offered incentives like weekend passes, cash bonuses, promotions and trips abroad for killing insurgents.

Zuluaga is seen by his opponents as Uribe’s puppet.

But while Santos was elected in 2010 with the votes of the right, including Uribe supporters, he angered his former boss as soon as he took office by countering several of the ex-president’s main policies and criticising some of his government’s actions – prompting fierce opposition from Uribe.

Santos also patched things up with his awkward neighbour, Venezuela’s Hugo Chávez – detested by Uribe – who governed from 1999 until his premature death in 2013.

With Chávez’s aid, Santos undertook negotiations to put an end to the war with the Revolutionary Armed Forces of Colombia (FARC), which was founded as a communist-inspired peasant army and turned 50 years old on May 27.

After two years of exploratory talks, formal negotiations began in November 2012 in Havana. The talks are closely followed by the international community, and are moving ahead even as the conflict rages on, because Santos has not agreed to declare a ceasefire.

Now, five days ahead of the runoff vote, Santos and a smaller but more radical guerrilla group, the National Liberation Army (ELN), which also emerged in 1964, announced that since January they have been holding exploratory talks that could lead to formal negotiations.

The exploratory phase with the FARC was kept secret and only revealed once it gave rise to full-blown talks. So because he reported the contacts made with the ELN, Santos was accused this week of using the peace talks for electioneering purposes.

In Colombia, the armed conflict has always been decided at the ballot box. Without fail, candidates promise to bring it to an end, with the only difference being in how they propose to do so: by a negotiated solution or promising once more to defeat the rebels by military means?

While Uribe opted for the latter, Santos has combined the two approaches.

Zuluaga, like Uribe, denies that there is an armed conflict in Colombia, referring instead to “the terrorist threat.” He has accused Santos of “negotiating with terrorists.”

Santos responds that the money that is swallowed up by the war could catapult Colombia into the big leagues of the Organisation for Economic Cooperation and Development (OECD) – the so-called rich countries’ club.

Zuluaga initially announced that he would suspend the peace talks as his first measure as president – although he later toned down the threat.

But he said that he was not bound by what had been agreed so far by the two sides in the negotiations.

There is a real possibility that he might withdraw from the FARC talks at the first chance, and that he may never launch negotiations with the ELN, if he becomes president.

The risk that Zuluaga could sink the peace process, seen by international observers as a serious attempt at peace, has led to the unthinkable: two-thirds of the left, according to surveys, say they would vote for Santos – who represents the traditional oligarchy – even though they only see eye to eye with him with regard to his peace policy.

The other one-third of the left see no difference between Santos and Zuluaga/Uribe and say they have serious doubts that Santos will live up to any agreement signed with the guerrillas.

There is a real possibility of that. Which is why the unprecedented backing of Santos’s reelection by anti-establishment sectors takes on even greater significance.

This has been fuelled, in the last 15 days, by a new movement in support of the peace talks. Every day, dozens of initiatives emerge, by artistes, intellectuals, victims’ organisations, central trade unions, indigenous and women’s groups, journalists and political leaders, to protect what has been achieved so far and press for the talks to continue.

This diverse, and partly spontaneous, pressure group could make the peace talks truly irreversible if Santos wins. But in any case the movement would be more organised to confront Zuluaga if he was to walk away from the negotiating table as president.

In contrast with those who do not see any differences between Santos and Zuluaga and his mentor, the reality is that Colombia’s economic elite is divided. And this is precisely why Santos has managed to push his peace policy forward so far.

Álvaro Uribe forms part of an emerging economic elite that has accumulated wealth thanks to the war, and is completely immersed in the logic of confrontation and counterinsurgency.

Uribe is a member of a clan that has been wrapped up in scandals, lawsuits and accusations for its ties with the far-right death squads that grouped together in the United Self-Defence Forces of Colombia (AUC) to fight the guerrillas, but then drove millions of peasants off their land to seize their property.

Perhaps that was why Uribe was the only one who managed to convince the AUC paramilitaries to demobilise; 80 percent of them did so, although many regrouped.

The division seen in Colombia’s leadership may originate in competition over business. Santos represents a more modern segment of the economic elite. For example, they do not need drugs to be illegal – a necessary condition in order for drug trafficking to generate the enormous revenues that financed the AUC.

The sector represented by Santos has done its math and concluded that the armed conflict is an obstacle to economic growth. For at least 15 years, they have believed that better business could be done if Colombia were not caught up in war.

The Jun. 15 elections will demonstrate whether that sector is still a minority.