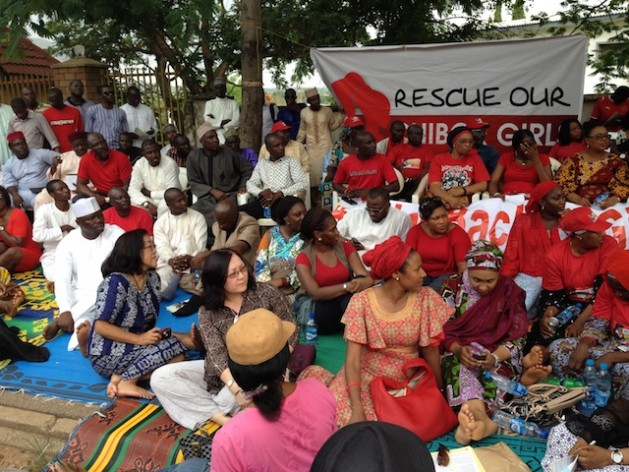 ABUJA, Jun 13 2014 (IPS) - The search for the Nigerian schoolgirls abducted by Islamist extremist group, Boko Haram, could be hampered by a series of policy and information flip-flops by the government, the latest one of them being a public disagreement on policy between the president and the military chief.

The extremist group abducted close to 300 school girls nearly two months ago on Apr. 14 in Chibok, northern Nigeria. The abduction triggered a global campaign and a massive social media movement under the Twitter hashtag #BringBackOurGirls. The United States, United Kingdom, France and Israel have sent experts to Nigeria to assist in rescuing the girls.

“If both sides say no force, no negotiation, that means no one is willing to do something. What we would like to see is all options are on the table- including negotiations." -- Ubong Ben, of Facts and Figures

Indeed the lack of clear policy could be the reason why on Monday Jun. 9, news broke here that suspected Boko Haram members seized at least 20 women from the Garkin Fulani community, a nomadic settlement near Chibok.

Details of the latest raid remain sketchy with neither the Nigerian military nor the government commenting on the attack. But local vigilantes and witnesses say armed men loaded the women onto trucks and drove away on Thursday, Jun. 5.

With the initial global spotlight on the Apr. 14 abduction receding, the government also appears to be back-peddling on its rescue effort.

But perhaps what could be considered the first government blunder came when the military claimed to have freed all but eight of the girls just two days after the Apr. 14 kidnapping. That claim was retracted after the head of the school, from where the girls were abducted, complained.

Since then, the government and local officials have faltered over the actual number of abducted girls, with the figure climbing from less than 100 to close to 300.

To date, the actual number is not certain, leaving many to use in-approximate descriptions like “more than 200 or nearly 300”.

However, on May 26 the army announced that it knew where the first group of abducted school girls were. But in the last week there have been no official updates from the government, and no news of breakthroughs. Officials merely say “efforts are ongoing, the government is doing all it can to free the girls.”

But this week critics accused the military is spending valuable time targeting the media as it seized newspapers and accused the press of undermining national security through its reporting of the abductions. The military, however, says its siege on the media is a “security operation”, and denies it has anything to do with news content.

But an apparent split between the president and the military chief over the choice tactics for the release of the girls could also be hampering the efforts to rescue them. This apparent split is seen here as underscoring a longstanding lack of a coherent strategy against a deadly group that has killed more than 12,000 over five years, according to President Goodluck Jonathan.

The president has branded the group the “Al-Qaeda of West Africa”. 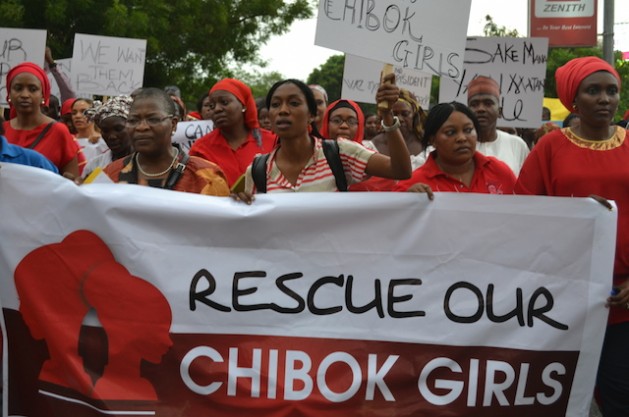 Jibrin Ibrahim, a political scientist and a leading Nigerian civil rights activist who leads the now famous #BringBackOurGirls daily protest in Nigeria’s capital, Abuja, handed a grim warning about the conflicting remarks by Jonathan and his military chief, Alex Badeh, about whether to use force or negotiations with Boko Haram.

Boko Haram has offered to swap the girls in exchange for hundreds of its detained fighters; and has threatened to sell or marry off the girls if the government does not respond.

Jonathan vowed this month in a major televised speech to free the girls kidnapped in April.

But both sides must agree immediately on a tactic, said Ibrahim.

“If the military says they won’t use force, and the president says he has ruled out the negotiations with the group, then that is a dead-end because those are the only two options on the table,” Ibrahim told IPS. Even the #BringBackOurGirls daily protest itself was handled badly by the government when on Jun. 2, the FCT Commissioner of Police, Joseph Mbu, banned the protests. However, the ban was overruled a day later by Inspector-General of Police Mohammed Abubakar.

Ibrahim said he would personally prefer negotiations with Boko Haram, an option that Jonathan has long ruled out.

Previous attempts by the military to conduct rescue efforts in other abduction cases have ended on a bloody note, with one involving the killing of an Italian and a Briton by their captors.

“The danger in the double speak is that it may not only send wrong signals to the terrorist group but may also push them into taking more vicious steps in their bid to bring the government to its knees,” Eric Ojo, of the Centre for Human Rights, University of Pretoria, South Africa, told IPS.

Driven by a religious fundamentalist ideology, and an ambition to create an Islamic state in northern Nigeria, Boko Haram, whose name literally translates as “Education is Forbidden”, took the girls into captivity from a secondary school in Chibok where they were preparing for a final examination.

Nigeria’s senate president, two ministers, and another senior information official, have openly disagreed with the government’s line of action of either to swap detainees with Boko Haram, or to stick to the use of force.

Special Duties Minister Taminu Turaki, and the director general of the National Orientation Agency, Mike Omeri, have said that the government was prepared for talks.

Jonathan himself was quoted by Britain’s Minister for Africa, Mark Simmonds, as saying downright he would not consider a prisoner swap or negotiation with Boko Haram.

However, government sources said secret negotiations that would have resulted in the exchange of detainees by both sides, failed to go through last month after the talks were called off by Jonathan.

Critics view the conflicting positions as typical of a government accused of lacking a response to a deadly group that threatens the country’s soul.

“The government must keep its house in order,” Ubong Ben, of Facts and Figures, a Nigerian accountability outfit, told IPS.

Ibrahim said the disagreement and dilly-dallying could prove harmful to the abducted girls.

“If both sides say no force, no negotiation, that means no one is willing to do something. What we would like to see is all options are on the table- including negotiations,” he said.

But some Nigerians analysts also believe the government may deliberately be distorting its information to confuse Boko Haram, while secretly exploring all options.

“It is a possible game plan,” said Joseph Fayeye of the Centre for Peace and Strategic Studies.

“What is certain is that the government will also consider diplomatic steps that are not known to the public,” he told IPS.