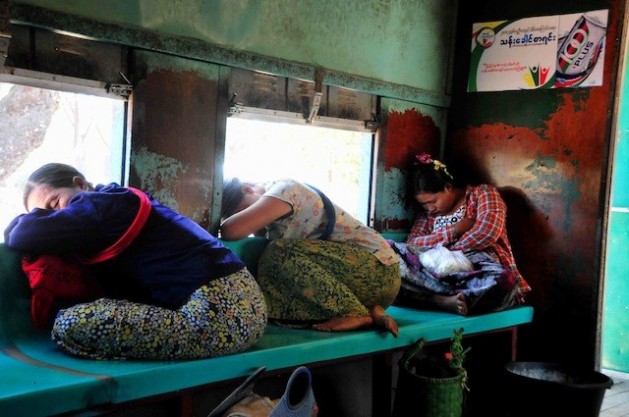 Women sleep on a crowded train in Myanmar. Globally, some 1.2 billion people live on less than 1.25 dollars a day. Credit: Amantha Perera/IPS

COLOMBO, Jul 24 2014 (IPS) - Millions still live in poverty and even those who have gained the security of the middle-income bracket could relapse into poverty due to sudden changes to their economic fortunes in South Asia, the latest annual Human Development Report by the United Nations Development Programme (UNDP) revealed.

It went on to warn that despite the region’s gains, the threat of more of its citizens being pushed back into poverty was very real and that there were large disparities in income and living standards within nations.

“Many who recently joined the middle class could easily fall back into poverty with a sudden change in circumstances,” the report’s authors stressed.

“The most successful anti-poverty and human development initiatives to date have taken a multidimensional approach, combining income support and job creation with expanded healthcare and education opportunities." -- UNDP Human Development Report 2014
Here in Sri Lanka, categorised as a lower middle-income country by the World Bank in 2011, overall poverty levels have come down in the last half-decade.

The Department of Statistics said that poverty levels had dropped from 8.9 percent in 2009 to 6.7 percent by this April. In some of the richest districts, the fall was sharper. The capital Colombo saw levels drop from 3.6 percent to 1.4 percent. Similar drops were recorded in the adjoining two districts of Gampaha and Kalutara.

However the poorest seemed to getting poorer. Poverty headcount in the poorest area of the nation, the southeastern district of Moneralaga, increased from 14.5 percent to 20.8 percent in the same time period.

“There is a very low threshold for the status of employment,” he told IPS, referring to the ‘10 years and above’ age threshold used by the government to assess employment rates.

“Such a low threshold gives an artificially higher employment rate, which is deceptive,” he stressed.

The UNDP report said that in the absence of robust safeguards, millions ran the risk of being dragged back into poverty. “With limited social protection, financial crises can quickly lead to profound social crises,” the report forecast.

In Indonesia, for instance, the Asian Financial Crisis of the late 1990s saw poverty levels balloon from 11 percent to 37 percent. Even years later, the world’s poor are finding it hard to climb up the earnings ladder.

Globally some 1.2 billion people live on less than 1.25 dollars a day, and 2.7 billion live on even less, the report noted, adding that while those numbers have been declining, many people only increased their income to a point barely above the poverty line so that “idiosyncratic or generalised shocks could easily push them back into poverty.”

This has huge implications, since roughly 12 percent of the world population lives in chronic hunger, while 1.2 billion of the world’s workers are still employed in the informal sector.

Punchi Banda Jayasundera, the secretary to the treasury and the point man for the national economy, predicts a growth rate of 7.8 percent for this year.

“This year should not be an uncomfortable one for us,” he told IPS, but while this is true for the well off, it could not be further away from reality for hundreds of thousands who cannot make ends meet or afford a square meal every day.

While the report identified the poor as being most vulnerable in the face of sudden upheavals, other groups – like women, indigenous communities, minorities, the old, the displaced and the disabled – are also considered “high risk”, and often face overlapping issues of marginalisation and poverty.

The report also identified climate change as a major contributor to inequality and instability, warning that extreme heat and extreme precipitation events would likely increase in frequency.

By the end of this century, heavy rainfall and rising sea levels are likely to pose risks to some of the low-lying areas in South Asia, and also wreak havoc on its fast-expanding urban centres.

“Smallholder farmers in South Asia are particularly vulnerable – India alone has 93 million small farmers. These groups already face water scarcity. Some studies predict crop yields up to 30 percent lower over the next decades, even as population pressures continue to rise,” the report continued, urging policy-makers to seriously consider adaptation measures.

Sri Lanka is already talking about a 15-percent loss in its vital paddy harvest, while simultaneously experiencing galloping price hikes in vegetables due to lack of rainfall and extreme heat.

It has already had to invest over 400 million dollars to safeguard its economic and administrative nerve centre, Colombo, from flash floods.

“We are getting running lessons on how to adapt to fluctuating weather, and we better take note,” J D M K Chandarasiri, additional director at the Hector Kobbekaduwa Agrarian Research Institute in Colombo, told IPS.

Smart investments in childhood education and youth employment could act as a bulwark against shocks, the report suggested, since these long-term measures are crucial in interrupting the cycle of poverty.

The report also urged policy makers to look at development and economic growth through a holistic prism rather than continuing with piecemeal interventions, noting that many developed countries invested in education, health and public services before reaching a high income status.

“The most successful anti-poverty and human development initiatives to date have taken a multidimensional approach, combining income support and job creation with expanded health care and education opportunities and other interventions for community development,” the reported noted.