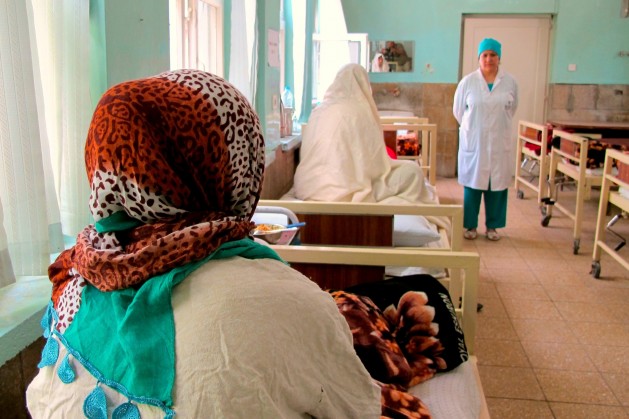 Rukia (in the foreground) recovers after a successful fistula operation at Malalai Maternity Hospital in Kabul (August 2014). Credit: Karlos Zurutuza/IPS

KABUL, Sep 2 2014 (IPS) - “The smell of faeces and urine isolates them completely. Their husbands abandon them and they become stigmatised forever” – Dr Pashtoon Kohistani barely needs two lines to sum up the drama of those women affected by obstetric fistula.

Alongside the health centre in Badakhshan – 290 km northeast of Kabul – Malalai Maternity Hospital is the only health centre in Afghanistan with a section devoted to coping with a disease that is seemingly endemic to the most disadvantaged members of the population: women, young, poor and illiterate.

“Given that a caesarean birth is not an option for most Afghan women, the child dies inside them while they try to give birth. They end up tearing their vagina and urethra,” Dr Kohistani told IPS. “Urinary, and sometimes faecal incontinence too, is the most immediate effect,” added the surgeon as she strolled through the hospital corridors where only women wait to be seen by a doctor, or just come to visit a sick relative.

“Pressure mounts on them from every side, even from their mothers-in-law. They have to hear things such as `I had five children without ever seeing a doctor´. Many of these poor girls end up committing suicide” – Dr Nazifah Hamra

They are of practically all ages. Some show obvious signs of pain while others look almost relaxed. In fact, they are in one of the very few places in Afghanistan where the total lack of male presence allows them to uncover their hair, take off their burka and even roll up their sleeves to beat the heat.

According to Nazifah Hamra, head of Malalai´s Fistula Department, “malnutrition is one of the key factors behind this problem. You have to bear in mind that women from remote rural areas in Afghanistan always eat after the men. Girls often don´t get enough milk and essential nutrients for their growth. And add to it that they only get to see a doctor when they marry, and usually at a very early age.”

Dr Hamra told IPS that she attends an average of 4-5 patients suffering from a fistula at any one time. Rukia is one of the two recovering in an eight-bed ward on the hospital´s second floor.

“I was 15 when I got married and 17 when I got pregnant,” recalls the 26-year-old woman from a small village in the province of Balkh, 320 km northwest of Kabul.

“When I was about to give birth, I had a terrible pain but the road to Kabul was cut so I was finally taken to Bamiyan, 150 km east of Kabul.”

Sitting on the bed carefully in order not to obstruct the catheter that still evacuates the remaining urine, Rukia tells IPS that her son died in her womb. An unskilled medical staff only made things worse.

“What the doctors did to her is difficult to believe. She was brutally mutilated,” said Dr Hamra, adding that medical negligence was “still painful common currency” in Afghanistan.

Brad Adams, Asia Director at Human Rights Watch, called on Afghan officials to end the harm being caused by child marriage. “The damage to young mothers, their children and Afghan society as a whole is incalculable,” Adams stressed.

Rukia´s husband left to marry another woman so she had no other choice but to move back to her parents´ house, where she has lived for the last nine years. But even more painful than her ordeal and the defection of her husband, she says, is the fact that she will never be a mother.

Dr Hamra knows Rukia´s story in detail, as well as those of many others in her situation. “Pressure mounts on them from every side, even from their mothers-in-law,” she told IPS. “They have to hear things such as `I had five children without ever seeing a doctor´. Many of these poor girls end up committing suicide.” However, preferring to look towards the future, she said that Rukia will do well after the operation.

“From now on she´ll be able to enjoy a completely normal life again,” stressed the surgeon, who also wanted to express her gratitude to the UN Population Fund (UNFPA) which “seeks to guarantee the right of every woman, man and child to enjoy a life of health and equal opportunity.”

Annette Sachs Robertson, UNFPA representative in Afghanistan, briefed IPS on the organisation´s action in the country:

“We started working in 2007, in close collaboration with the Afghan Ministry of Public Health. We train surgeons and we provide Malalai with the necessary equipment and medical supplies. Thanks to this initiative, over 435 patients have been treated and rehabilitated at Malalai Maternity Hospital and we have plans to extend the programmes to Jalabad, Mazar and Herat provinces,” explained Robertson, a PhD graduate in biology and biomedical sciences from the University of Harvard.

“You hardly ever see these cases in developed countries,” she added.

Meanwhile, thanks to yet another successful operation, Najiba, a 32-year-old from Baghlan – 220 km north of Kabul – will soon be back home after suffering from a fistula over the last 14 years.

Born in a remote rural village, she was married at 17 and lost her first son a year later, after three days of labour. Despite the fistula problem, she was not abandoned by her husband and, today, they have six children.

“I was only too lucky that my husband heard on the radio about this hospital,” explains Najiba, with a broad smile hardly ever seen among those affected.