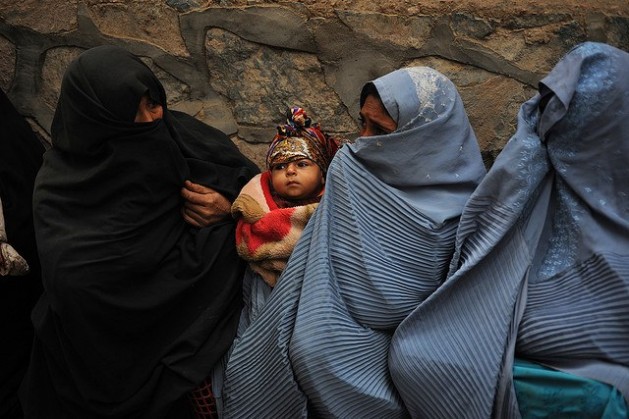 Doctors Without Borders (MSF) says Afghanistan is “one of the riskiest places to be a pregnant woman or a young child”. Credit: DVIDSHUB/CC-BY-2.0

KABUL, Sep 16 2014 (IPS) - Nasrin Mohamadi, a mother of four, has promised herself never to set foot in an Afghan public hospital again. After her first experience in a maternity ward, she has lost all faith in the state’s healthcare system.

“The doctors said that I had not fully dilated yet so they told me to wait in the corridor. I had to sit on the floor with some others as there wasn’t a single chair,” Mohamadi tells IPS, recalling her experience at Mazar-e Sharif hospital, 425 km northwest of Kabul.

“They finally took me into the room where three other women were waiting with their legs wide open while people came in and out. They kept me like that for an hour until I delivered without [an] anaesthetic, and not even a single towel to clean my baby or myself,” adds the 32-year-old.

“Immediately afterwards the doctors told me to leave as there were more women queuing in the corridor.”

“Many rural health clinics are dysfunctional, as qualified health staff have left the insecure areas, and the supply of reliable drugs and medical materials is irregular or non-existent." -- Doctors Without Borders (MSF)
Even after she left the hospital, Mohamadi’s ordeal was far from over. The doctors told her not to wash herself for ten days after the delivery, and as a result her stitches got infected.

“I paid between 600 and 800 dollars to give birth to my other three children after that; it was money well invested,” she says.

This is a steep price to pay in a country where the average daily income is under three dollars, and 75 percent of the population live in rural areas without easy access to health facilities.

Many women have no other option than to rely on public services, and the result speaks volumes about Afghanistan’s commitment to maternal health: some 460 deaths per 100,000 live births give the country one of the four worst maternal mortality ratios (MMR) in the world outside of sub-Saharan Africa.

While this represents a significant decline from a peak of 1,600 deaths per 100,000 births in 2002, far too many women are still dying during pregnancy and childbirth, according to the United Nations.

The lack of specialised medical attention during pregnancy or delivery for a great bulk of Afghan women is partly responsible. Few have access to health centres because these are only reachable in urban areas. The lack of both security and proper roads forces many women to deliver at home.

This does not bode well for the 6.5 million women of reproductive age around the country, particularly since Afghanistan only has 3,500 midwives, according to the U.N. Population Fund (UNFPA)’s latest State of the World’s Midwifery report.

This means that the existing workforce of midwives meets only 23 percent of women’s needs. The situation is poised to worsen: UNFPA estimates that midwifery services in the country “will need to respond to 1.6 million pregnancies per annum by 2030, 73 percent of these in rural settings.”

Even women with access to top-level urban facilities, such as the Kabul-based Malalai Maternity Hospital, are not guaranteed safety and comfort.

For instance, Sultani*, a mother of four, tells IPS she is far from satisfied with her experience.

“I gave birth through caesarean section to my four children in this hospital but the doctors who attended to me were unskilled,” she remarks bluntly. “A majority of them had only completed three years of medical [school].

Sultani’s opinion may be specific to her own experience, but it finds echo in various reports and studies of the country’s health system. A 2013 activity report by Doctors Without Borders (MSF) labeled Afghanistan “one of the riskiest places to be a pregnant woman or a young child” due to a lack of skilled female medical staff.

“Private clinics are unaffordable for most Afghans and many public hospitals are understaffed and overburdened,” reports the organisation, which runs four hospitals across the country.

“Many rural health clinics are dysfunctional, as qualified health staff have left the insecure areas, and the supply of reliable drugs and medical materials is irregular or non-existent,” continues the report.

This is a sobering analysis of a country that will need to configure its health system to cover “at least 117.8 million antenatal visits, 20.3 million births and 81.3 million post-partum/postnatal visits between 2012 and 2030”, according to UNFPA.

Given that contraceptive use is still scarce, reaching only 22 percent of reproductive-age women, large families continue to be the norm. Afghan women give birth to an average of six children, a practice fuelled by a cultural obsession with bearing at least one son, who will in turn care for his parents in their old age.

A lack of information about birth spacing means mothers seldom have time to fully recover between deliveries, causing a range of health issues for the mother and a lack of milk for the newborn child.

Findings from a 2013 survey conducted by the Afghan Ministry of Public Health indicate that only 58 percent of children below six months were exclusively breastfed.

Still, this is an improvement from a decade ago and represents small but hopeful changes in the arena of women and children’s health. The same government survey found, for instance, that “stunting among children has decreased by nearly 20 percent from 60.5 percent in 2004 to 40.9 percent in 2013.”

Dr. Nilofar Sultani, who practices at the Malalai Maternity Hospital, tells IPS that medical assistance in Afghanistan has improved “significantly” over the last ten years.

“There are more health centres, and [they are] far better equipped. The number of skilled doctors has also grown,” explains Sultani, a gynaecologist.

But the most important change, she says, has been in women’s attitude towards medical care. “Before, very few women would come to the hospitals but today, the majority of women come forward on their own. They’re slowly losing their fear [of] doctors,” notes Sultani, adding that health centres are among the very few places where Afghan women can feel at ease without the presence of a man.