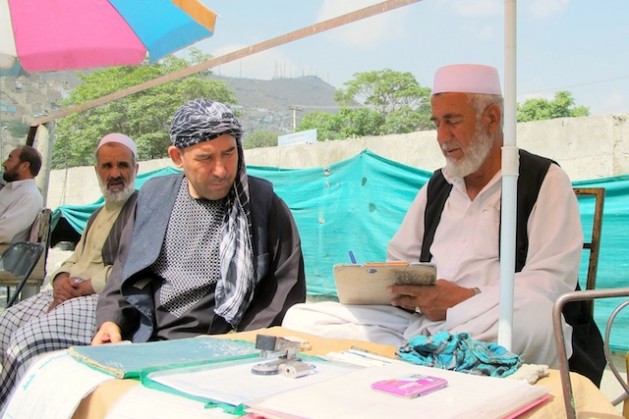 ‘Copyists’ (transcribers) on duty in downtown Kabul. Some 66 percent of Afghans are illiterate, with figures reaching 82 percent among women. Credit: Karlos Zurutuza/IPS

KABUL, Sep 26 2014 (IPS) - Seventy-year-old Mohamad Arif still earns a living in the streets of Kabul. He prepares all kind of documents for those who cannot read or write – in other words, the majority of people in this country of 30.5 million people.

“I was a Colonel of the Afghan Air Force but I can barely survive with my pension. I had no other choice but to keep working so I took this up 10 years ago,” Arif tells IPS during a short break between two clients.

"People usually want me to write a letter to a relative, often someone in prison. However, most show up because they need us to fill out official forms or applications of all sorts." -- Seventy-year-old Mohamad Arif, a transcriber in Kabul
Arif says he has two sons in college, and that he only leaves his post on Fridays – the Muslim holy day. He spends the rest of the week sitting in front of the provincial government building, in downtown Kabul. That’s where he has his umbrella and his working desk, also essential tools for the rest of the transcribers lining up opposite the concrete wall that protects the government compound.

“People usually want me to write a letter to a relative, often someone in prison. However, most show up because they need us to fill out official forms or applications of all sorts,” explains the most veteran pen-worker in this street, just after his last service, which earned him 50 afghanis (0.80 dollars) for a claim over a family inheritance not yet received.

In its National Literacy Action Plan, statistics provided by the Afghan Ministry of Education speak volumes: some 66 percent of Afghans are illiterate, with figures reaching 82 percent among women.

At 32, Karim Gul is also illiterate so he’s forced to come here whenever he needs to tackle an administrative process. The problem this time is that he sold a car but he has not yet been paid.

“My parents came to Kabul from Badakhshan [a north-eastern Afghan province] when I was a child but they prevented me from going to school. They said the other children would laugh at me,” recalls this young Tajik, who thinks he is “already too old” to learn how to read and write.

Customers like him need only wait a few minutes before they’re attended to. The copyists – fifteen in total here – are experts in their trade, but probably none more so than Gulam Haydar, a 65-year-old man who has worked for decades behind the high wall. 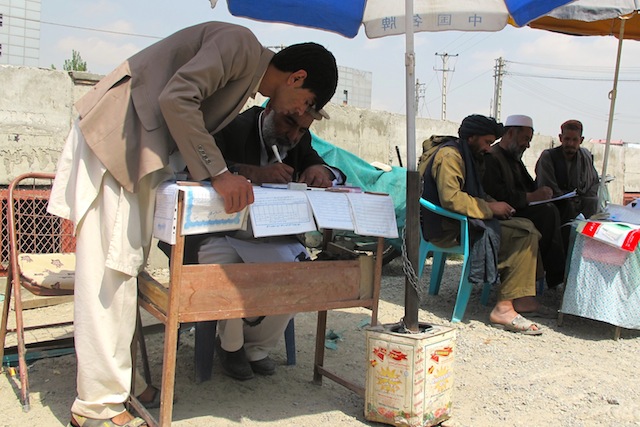 ‘Copyists’ (transcribers) in Afghanistan can earn up to one dollar for each letter or document they prepare for their illiterate customers. Credit: Karlos Zurutuza/IPS

“I was a civil servant until I retired eight years ago but I had to keep working to survive,” this Kabuli tells IPS. His age, he adds, does not allow him to conduct any physical work, so this alternative came as “holy salvation.”

“Prices for all of us range from 20 to 100 afghanis [0.30-1.7 dollars] depending on the request,” explains Haydar, adding that his monthly income varies accordingly. In any case, he says, the amount he receives helping his illiterate countrymen and women is “far better” than the average 203 dollars an Afghan civil servant gets monthly.

Sitting next to him, Shahab Shams nods.

“I just get enough to survive and to send my two children to school,” says this 42-year-old man, who has spent the last 13 years in his post.

“In Afghanistan there is no work for anybody. Besides, corruption is rife,” adds the copyist. “You constantly need to pay under the table for everything: to get your passport or any other official certificate; to enrol your children in school; in hospitals, in every single government building,” laments this man with a degree in engineering from the University of Kabul. It was never of any use to him.

According to a joint survey conducted by the Afghan High Office of Oversight and Anti-Corruption (HOOAC) and the United Nations Office on Drugs and Crime (UNODC), half of all Afghan citizens paid a bribe in 2012 while requesting a public service.

The 2012 study said most Afghans considered corruption, together with insecurity and unemployment, to be “one of the principal challenges facing their country, ahead even of poverty, external influence and the performance of the Government.”

Interestingly enough, such surveys also reveal that corruption is increasingly being considered an admissible part of day-to-day life. About 68 percent of citizens interviewed in 2012 said it was acceptable for a civil servant to top up a low salary by accepting small bribes from service users (as opposed to 42 per cent in 2009).

Similarly, 67 percent of the Afghan citizenry considered it “sometimes acceptable” for a civil servant to be recruited on the basis of family ties and friendship networks (up from 42 percent in 2009).

Leyla Mohamad had no chance whatsoever of ever becoming a civil servant. While it is no longer strange to come across female workers in the administration, illiteracy still poses an insurmountable hurdle. From under her burka, Mohamad explains she wants to denounce an assault she suffered in broad daylight, while she was accompanied by her three children, the oldest being just 10 years old.

“Every day we hear several cases like this one,” Abdurrahman Sherzai tells IPS after filling Mohamad’s form. “Too much time was lost in the failed election process and the economy has stalled because many companies and businesses depended on government subsidies. Eventually, sheer desperation leads to attacks against the most vulnerable [members] of society,” notes Sherzai, moments after being paid for the service.

After a presidential election that took place on Apr. 5, followed by a second runoff on Jun. 14, a fraud allegation forced a full ballot recount.

However, contenders agreed to share power on Sept. 21 so Ashraf Ghani was announced as the new Afghan president with his challenger, Abdullah Abdullah, joining him in a unity government. Despite the two runoffs and the painful audit process, no results of any kind will finally be published.

It was the Afghan Education Minister himself, Ghulam Farooq Wardak, who assured IPS that “none of this would have happened” were Afghanistan a fully literate country.

“But also bear in mind that we literally started from scratch, with a 95-percent illiteracy rate only 12 years ago,” the senior official underlined from his ministerial office.

But current statistics, he claims, lead to optimism. “We’ve gone from just a million children in school 12 years ago to nearly 13 million today; from 20,000 teachers to over 200,000,” asserted Wardak, adding that 2015 “will be the year for full school [enrolment], and full literacy in Afghanistan will be a reality in 2020.”