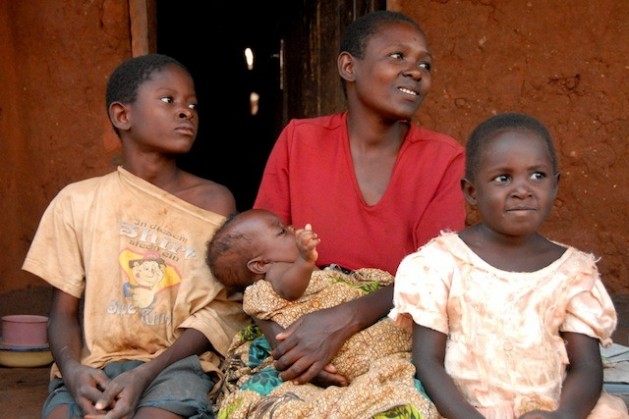 Only 65 percent of Senegalese women give birth in the presence of a skilled attendant. Credit: Travis Lupick/IPS

DAKAR, Sep 24 2014 (IPS) - Diouma Tine is a 50-year-old vegetable seller and a mother of six boys. In her native Senegal, she tells IPS, motherhood isn’t a choice. “If you’re married, then you must have children. If you don’t, then you don’t get to stay in your husband’s house, and no one will respect you.”

Despite this prevailing cultural outlook, becoming a mother here is neither easy, nor safe, with only 65 percent of Senegalese women giving birth in the presence of a skilled attendant.

According to available data, 54 percent of Senegal’s 13.7 million people live in rural areas. Of these, some 3.3 million are women of reproductive age, an estimated 85 percent of who live about 45 minutes from a health facility.

The country has a worryingly high maternal mortality rate (MMR). The last government survey taken in 2005 found that 41 women died per 1,000 live births, giving the country a ranking of 144 out of 181.

“In some regions, like the Kolda and Tamba Regions, you can find up to 1,000 deaths per 100,000 live births [since] some women are denied the ability to make decisions about when to go to hospital, [and] sometimes when roads are bad it’s difficult for them to get to a health centre.” -- Gacko Ndèye Ndiaye, coordinator of the gender cell at the Ministère de la Santé et Action Sociale (Ministry of Health and Social Action)
Between 2005 and 2010, the MMR in Senegal fell from 401 to 392 deaths per 100,000 live births, representing some progress but hinting at the scale of unmet need around the country.

One of the Millennium Development Goals (MDGs) is to achieve universal access to reproductive healthcare by 2015, but it is increasingly clear to health workers and policy makers that Senegal will not reach this target.

This year’s State of the World’s Midwifery Report produced by the United Nations Population Fund (UNFPA) projected that Senegal’s population was set to increase by 59 percent to 21.9 million by 2030.

“To achieve universal access to sexual, reproductive, maternal and newborn care, midwifery services must respond to one million pregnancies per annum by 2030, 53 percent of these in rural settings,” the report stated, adding that the health system must be configured to cover some 66 million antenatal visits, 11.7 million births, and 46.7 million post-partum and postnatal visit from 2012 to 2030.

This past May, on the International Day of the Midwife, former Prime Minister Aminata Touré called attention to a gap of 1,336 midwives in the country, setting in motion a government-sponsored recruitment drive to rapidly increase the number of trained birth attendants.

Senegal has both ‘sage-femmes’ (fully trained midwives), and ‘matrones’, direct-entry midwives who deliver the vast majority of babies in Senegal but lack proper education, and often learn their trade on site, sometimes spending less than six months in a clinical training setting before being taking up posts in rural areas.

“There is kind of a crisis in education,” Kaya Skye, executive director of the African Birth Collective, tells IPS.

“Matrones learn how to take blood pressure, but they don’t understand what that means. [With matrones] there is an urgency to get the baby out as soon as possible [and] an overuse of drugs, which is […] another cause of mortality,” she explained.

In fact, Touré stated during a speech on May 12 that 60 percent of maternal deaths in the country could have been avoided with “sufficient personnel, a suitable medical platform, [and] democratic access to women’s health services, notably the disadvantaged in remote areas.”

“There are disparities between different areas,” she asserted. “In some regions, like the Kolda and Tamba Regions, you can find up to 1,000 deaths per 100,000 live births [since] some women are denied the ability to make decisions about when to go to hospital, [and] sometimes when roads are bad it’s difficult for them to get to a health centre.”

The National Agency of Statistics and Demography’s 2011 health indicators report found that over 90 percent of urban births are assisted by a trained assistant, but that number falls to just half for rural births.

Skye’s African Birth Collective works to fill these gaps, and recently built the Kassoumai Birth Centre in the Kabar village of the southern Casamance region to meet the needs of mothers and midwives.

According to Skye, “Traditional midwives said they wanted their own place to practice; that they didn’t feel welcome in government clinics. There was nothing in Kabar for women – they were giving birth in the showers behind their houses.”

Although the government does provide training for midwives, building this centre was “about creating infrastructure that is outside of government protocols and facilitating that dialogue where the traditional midwives can say ‘We do it this way’,” Skye says.

A long colonial history and post-colonial education in Senegal has meant that the Western obstetric model has been dominant.

Grassroots efforts, including the work of ENDA Santé, the health division of an international NGO called Environmental Development Action in the Third World, are helping to foster a better balance between Westernised birthing techniques and traditional methods.

The African Birth Collective and ENDA Santé have translated the educational manual ‘A Book for Midwives’ into French, giving birth attendants in Francophone West Africa access to crucial information, such as the case for non-supine positions, and inverted resuscitation methods.

For women like Tine, the pride that comes from being a mother will always outweigh the dangers and complications of pregnancy and childbirth.

But if the government of Senegal scales up its efforts to improve health services, it can remove the fear factor altogether, and make a strong contribution towards global efforts to ensure the health and safety of every mother.